For Colorblind Teen, Shades Give The World A New Look 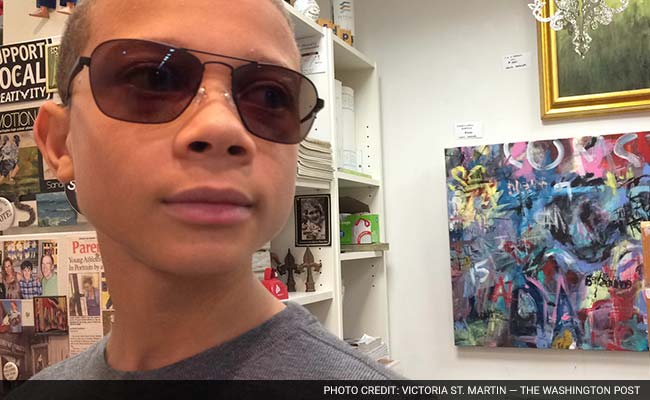 Michael Sharpe, 14, has a secret: He cannot see red and green colors. To him, the crimson logo of his basketball uniform looks muddy orange; the gold luxury car he admires appears to be brown; and the cool, emerald-colored dinosaurs in "Jurassic World" are navy blue.

"My mom told me the dinosaurs were, like, green. I thought they were, like, blue," Michael said. This convinced his mother, Meagan Barnes, that the eighth-grader at Arlington County's Gunston Middle School needed vision testing.

After Michael was diagnosed with colorblindness in September, his mother enrolled him in a contest that asked him to create a video to explain the future he is hoping for. In it, he describes becoming an automotive engineer, creating a cloning machine and being able to eat an endless supply of self-replenishing pizza.

He yearns for a suit that would allow him to be invisible - and for the ability to point out to his friends a cool car that he sees on the street without having to guess at its color.

It was enough for Michael to be chosen as one of 75 children to win a pair of EnChroma sunglasses, which enhance color vision for some wearers and allow them to appreciate hues they have not been able to distinguish before.

Don McPherson, creator of the glasses, said they are based on a product he designed years ago to protect surgeons' eyes from the lasers they use in the operating room. He found out that the shades were disappearing from the hospital - surgeons liked them, he said, and were taking them home. So he decided to take home a pair, too.

At an Ultimate Frisbee tournament a short time later, a friend who is colorblind asked to borrow McPherson's glasses.

"He said, 'Oh, my God, I can see the cones,' and he was referring to the fluorescent orange marker cones that delineate the perimeter of a playing field," McPherson said. "And I said, 'That's crazy - you can't see the cones normally?' and he said, 'No, the grass and the cones are the same shade of brown.' "

McPherson got a grant from the National Institutes of Health to study the lenses and, in 2012, created his first pair of EnChroma glasses. Glasses for children came in 2014.

The Berkeley, California-based company has indoor and outdoor prescription and nonprescription glasses, priced from $269 to $469. A spokesman said the company has sold more than 10,000 pairs this year.

One out of every 12 men and boys in the United States has some form of red-green colorblindness, researchers say. It can be difficult for them to work in fields such as cinematography, geology or the transportation industry.

"We live in a world where there's lots of color," said Jay Neitz, a color vision researcher at the University of Washington. "So you have all these fairly desperate people in the world that, basically, their dreams are shattered because they have this disability."

Every 10 years or so, Neitz said, someone comes up with a pair of glasses and claims it helps colorblind people. He said the earliest versions were a red filter that allows red light to go into the eye and blocks green light. Michael's lenses, in contrast, use sophisticated filters that remove a narrow band of the color spectrum, allowing him to differentiate colors he previously could not tell apart.

"Since a colorblind person never saw the color red or green, all of a sudden two things look different," said Neitz, who is trying to find a cure for colorblindness in humans, which is caused by missing or damaged genes.

Michael recently put on the EnChroma sunglasses for the first time, in the lobby of the apartment building where he lives with his family in Crystal City.

"I'm getting excited," he said, snapping his fingers and swaying from side to side.

He ventured with his mom into a shopping mall attached to their building, calling out colors as he saw them, adding a question mark at the end of each one: Red? Is that blue?

As they stopped at an art gallery, Barnes could not stop staring at her son. "I [remember] the times I told him to go get something, and he wouldn't bring back the right thing," Barnes said. "Now we can actually see the same colors."

Back in the apartment, Michael looked up at a picture he had created as a fourth-grader that is framed and hung on the wall. It features an underwater scene - black, purple and navy-colored fish, and water the color of amethyst.

"I don't know what I was thinking," he said.

Karen Rae Levine, whose son has colorblindness, wrote a children's book about the condition.

"Color deficiency is not the end of the world," Levine said. "It's just a different view of it." She ticked off the names of famous people who also have difficulty seeing certain colors, such as former president Bill Clinton and social-media giant Mark Zuckerberg, who created a blue background for Facebook because he has said he can see all shades of that color.

As for Michael, he just wants to be right - especially when he plays color-based games such as Uno or Twister.

And what does he think about the new glasses?