For A Small Town Cop, A Heart-Stopping Moment In San Bernardino 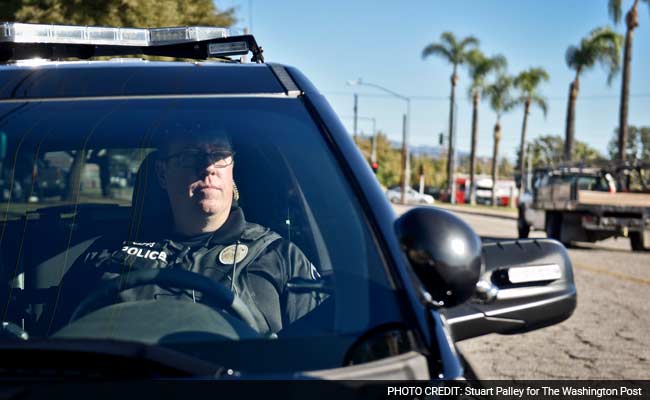 SAN BERNARDINO, California: In 23 years as a police officer, there was one thing Sgt. Andy Capps of the Redlands Police Department had never done until the afternoon of Dec. 2: Fire his weapon.

He'd fired it at the range, of course. But until the day of the terrorist attack here, and the epic shootout on San Bernardino Avenue, the burly Capps, 48, soft-spoken, bespectacled, a veritable Officer Friendly in his demeanor, was seemingly destined to go through an entire career without once pulling a trigger on a service handgun or rifle in a gun battle with a suspect.

The weapon was an AR-15 semi-automatic rifle. The suspects were Syed Rizwan Farook and Tashfeen Malik, husband-and-wife terrorists. They were directly in front of Capps when he turned on his lights and siren that afternoon about 3 p.m. on Tippecanoe Ave.

In the next several minutes, police and the suspects fired a combined 456 bullets.

The officers here wear black ribbons across their badges to memorialize the 14 people slain and the 22 people wounded by Farook and Malik at the Inland Regional Center.

Southern California remains jittery, with all 900 campuses in the Los Angeles Unified School District, the nation's second largest public school system, abruptly closed early Tuesday after what authorities said initially was a credible bomb threat. Some of the 640,000 students affected were already on their way to school, or in school.

Still, nearly two weeks after the San Bernardino attack, the anguish and adrenaline rush have started to subside, and the first responders and their bosses are putting together their after-action reports that likely will take months to complete. The first take on the tragedy is that the people in uniform performed with competence and heroism.

It wasn't perfect - there was the usual problem seen in major crises in which officers "self-deploy," rushing to scenes without being told to do so, and that created traffic jams and chaos. But the final analysis will show that two terrorists armed with four guns and more than 1,600 rounds of ammunition did not succeed in escaping, or reaching a second target, or killing or gravely wounding any of the police officers who ultimately ended the threat.

Capps is not a glory-seeker; in a 30-minute interview he emphasized the professionalism of his colleagues, and singled out the dispatchers who never lost their cool and helped the officers remain calm on a violent day.

Capps, a divorced father of two, is a local guy, born and raised in Beaumont, Calif. He still lives there. He has spent the last 15 years working in Redlands, a placid town famed for its orange groves just a 10-minute drive to the east from San Bernardino - on the off chance that there's no traffic on the I-10 freeway.

"The bravery and leadership that he showed in this instance is characteristic of how he is every day," he said. "The officers look up to Andy and trust him."

Soon after the mass shooting, a credible witness told police that someone named Syed Farook had been at a training session at the IRC and had left about 20 minutes before two people in masks and black clothing came inside and began firing. A trace of computer records showed that a man by that name lived in an apartment in Redlands and several days earlier rented from Enterprise a black SUV that matched the description of the getaway vehicle.

When an SUV with two people inside did a slow drive-by of the Redlands apartment several hours after the shooting, plainclothes narcotics officers began to tail it. The SUV drove west on the I-10 freeway, and exited at Tippecanoe Ave. By this time Capps had joined the entourage of unmarked cars, except he was in a marked vehicle.

Capps was waved ahead by the plainclothes officers and put himself directly behind the SUV. He turned on his lights and siren.

The SUV did not pull over. He could see two people inside putting on what he believed to be body armor (in fact they were wearing military-style vests that can hold ammunition clips, but did not have bullet-proof clothing). He also saw them exchanging objects that might be guns. He radioed these observations to the officers behind him.

"It seemed like they were getting ready to fight," Capps said.

The SUV reached the corner of Tippecanoe and San Bernardino Ave., and turned right, to the east, with Capps still behind them by about four car lengths.

Suddenly the rear window of the SUV exploded.

"I saw the window break out of the car and I saw gunshots coming from inside and muzzle flashes," Capps said.

It was deafening. He radioed that the suspects were firing. His car wasn't hit, somehow.

The avenue is broad and comparatively lightly traveled, lined by warehouses and then a long stretch of modest ranch-style homes. The SUV stopped next to a white picket fence in the right lane of the road. Farook got out and stood by the driver's side door and began firing. Malik kept firing from the back seat.

Capps stopped, armed himself with his AR-15, got out, and took cover behind his vehicle and began firing at the SUV. He is not sure how many shots he fired.

"I was hoping that I did not get shot," Capps said. "In the back of our minds, if you're being shot at, there's the fear that you'll be hit and the realistic fear that you'll die. But that wasn't on my mind. I was really just thinking I need to stop these guys from shooting at me."

Farook made a run across the street and was shot down by the far curb. Police stopped firing into the SUV only after realizing that no one inside was still shooting.

When it was over, Capps could barely hear anything, so deafening had been the battle. He then realized how fast his heart has been racing.

Capps answered questions from investigators all afternoon and evening and finally left the Sheriff's Department at 5 in the morning of Dec. 3, utterly exhausted.

"I slept fantastic," he said.