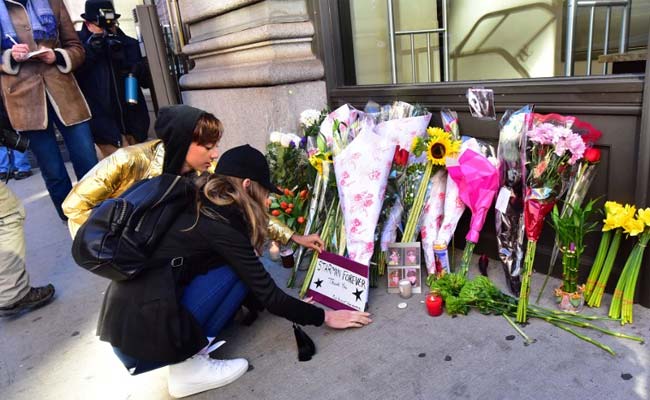 New York: Fans laid floral bouquets and notes of thanks outside David Bowie's New York home Monday, paying tribute to the legendary musician who died after a private battle with cancer.

"I feel devastated," said Penelope Bagieu, 33, who draws comics and lives in Brooklyn, but comes from France.

She cried after leaving a bunch of flowers outside the elegant brick building on Lafayette Street in Soho, where admirers laid dozens of bouquets, candles and brief notes.

They started to arrive before dawn, as soon as they woke to the news that the 69-year-old musician had passed away.

"I woke up my husband, 'Steve, Steve, David Bowie is gone'," said Michelle Lynn, who stopped by on her way to work carrying photographs of Bowie in her handbag.

"I have been a fan forever," she said. "My friends and I were all fanatic (about him). We did feel that on the photos he looked gaunt. We were all concerned but you never think that... you think it will go on forever.

"I saw him perform many times, the first time at Madison Square Garden. I was blown away," she said.

Bowie's death came as a shock just two days after he released his 25th album, capping one of the most influential and innovative pop careers of all time.

"Au revoir David," said the message from Bagieu on a bouquet placed next to the front door of the building.

"Thank you David, may the Gods bless us all," read another note left with a bunch of white roses and a candle.

Georgina Berrozpe, 45, from Spain who lives in the neighborhood, said she had come to bid farewell to an artist who had fascinated her since childhood.

She said she had been listening to his music for an hour since learning of his death.

"He was an extraordinary musician who surrounded himself with great people. I grew up with him," she said.