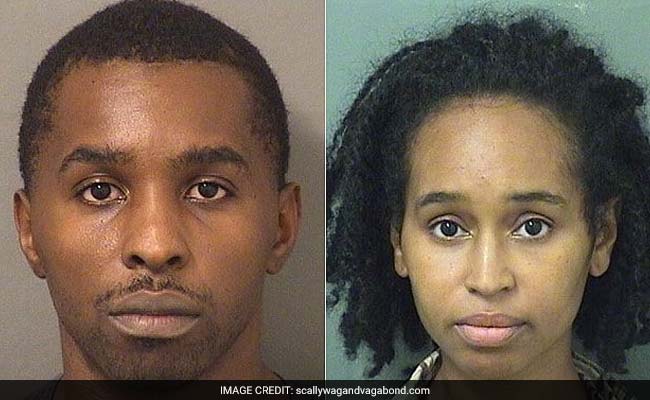 Donell Barron and Rikki Hart, both 34, were arrested on charges of child neglect according to reports.

The deputy said he was on a routine patrol in Greenacres, Fla., Saturday morning when he spotted the blue Toyota in a Wal-Mart parking lot. It wasn't the look of the vehicle that caught his attention but the smell emanating from it - an odor "similar to that of homeless camps," he said.

Inside, the deputy found a family of seven. The parents seemed healthy, he said, but their five children, ranging in age from 4 to 14, were filthy, fatigued and so malnourished that their bones were protruding from under their skin, according to WPTV. The oldest reportedly weighed a mere 50 pounds, just 5 pounds more than his 8-year-old sibling.

The parents, Donell Barron and Rikki Hart, both 34, were arrested Saturday on charges of child neglect, according to WPTV. As of Wednesday evening, they were being held in the Palm Beach County Jail in lieu of $1,000 bail, the Palm Beach Post reported. It was not clear Wednesday if they had hired defense attorneys.

The Palm Beach County Sheriff's Office told local media that the children, all of whom were described as "underweight," were taken to a hospital, where at least one of them was treated for unusually high blood pressure. The five kids are now in custody of the Florida Department of Children and Families, the Palm Beach Post reported.

Police said they took some of the children out to eat at McDonald's, where they "ravenously ate the meals, as if they had not been fed in quite some time."

When interviewed by the sheriff's office, Barron gave a grim account of how the family wound up living out of their car.

According to the Palm Beach Post, Barron told police that they had were evicted from their home in Port St. Lucie about a year ago and had spent about 10 months hopping from one hotel to another before they ran out of money. They had lived in the car for the past two months, he told police, adding that the children bathed in park bathrooms and urinated in a bucket they carried in the vehicle. Deputies reported that the children ate about once a day, their meals consisting mostly of salad and bread, and hadn't seen a doctor in years, according to the Palm Beach Post. None of the children were enrolled in school, and instead were home-schooled inside the car, Barron told police.

At times, Barron gave contradictory statements to police. First, he told deputies that he attended "three years of law school and practices law, but not as a lawyer," according to a police report reviewed by WPTV. Later, he said he lost his money trading stocks and had never attended law school. He described himself as a Native American with a "corporate name" and said he was "not the property of the U.S. or any corporation," the Palm Beach Post reported.

Police told local media that Barron and Hart appeared to be clean and in better health than the children.

Richard Hart and Robin Johnson, identified by WPTV as Hart's parents and the grandparents of the five children, told the station they had fallen out of touch with their daughter and didn't know how the family ended up in such a wretched state. They said she was once a homecoming queen and attended college on an academic scholarship.

The Palm Beach Post reported that the couple ran a blog called "Holistically Beautiful" that they launched in 2014. The blog's "about" page says Donell and Rikki Barron created the site "to show the benefits of living a healthier lifestyle and discuss topics which can enrich one's life." "They believe in the importance of living a balanced life and the importance of constantly improving oneself," it says.

Promoted
Listen to the latest songs, only on JioSaavn.com
A call to the number listed on the site went to a disconnected line and an email to the blog wasn't immediately returned.