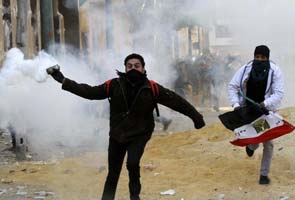 El Khusus, Egypt: Five Egyptians were killed and eight wounded in clashes between Christians and Muslims in a town near Cairo, security sources said on Saturday, in the latest sectarian violence in the most populous Arab state.

Christian-Muslim confrontations have increased in Muslim-majority Egypt since the overthrow of former President Hosni Mubarak in 2011 gave freer rein to hardline Islamists repressed under his rule.

Four Christian Copts and one Muslim were killed when members of both communities started fighting and shooting at each other in El Khusus north of the Egyptian capital, the sources said. State news agency MENA put the death toll at four.

Residents said the violence broke out on Friday when a group of Christian children were drawing on a wall of a Muslim religious institute.

"I saw the kids drawing on the wall after afternoon prayers so I grabbed them and told them to remove what they'd just written," said Mahmoud Mahmoud al-Alfi, a Muslim resident.

Then another man arrived and started beating the children, drawing a large crowd, he said. The situation escalated when someone drew a gun and fired into the air, killing one boy with a stray bullet.

"Suddenly the area was full of weapons," Alfi said, while weeping Muslim women sat nearby in front of a house, showing pictures of a man they said had been killed during the clashes.

Muslim leaders were quick to condemn the sectarian violence which comes as Egypt is struggling with a severe economic crisis and high inflation after two years of political upheaval.

"The sectarian riots which happened in El Khusus are unacceptable and grave," Saad al-Katatni, the head of the Muslim Brotherhood political party, said on his Facebook website. "There are some who want to set Egypt ablaze and create crises."

President Mohamed Mursi, a Brotherhood leader elected in June, has promised to protect the rights of Copts, who make up about 10 percent of Egypt's 84 million people.

On Saturday the situation was calm but tense in the small town where Muslims and Christians live close to each other but in separate streets. Security was tight with police vehicles parked in the main streets.

In a Christian neighbourhood dozens of angry young men gathered at noon on Saturday, chanting "with our blood and soul we sacrifice ourselves for the cross". The crowds left after a priest came and asked them to leave to calm tensions.

"There are people who want to cause sectarian strife between Muslims and Christians," said a Christian man who gave his name Kameel. "I've been here longer than 30 years and I have never seen any violence or extremism in our area."

Sectarian tensions have often flared into violence, particularly in rural areas where rivalries between clans or families sometimes add to friction. Love affairs between Muslims and Christians have also sparked clashed in the past.

Since Mubarak was ousted by a popular uprising, Christians have complained of several attacks on churches by radical Islamists, incidents that have sharpened longstanding Christian complaints about being sidelined in the workplace and in law.

Promoted
Listen to the latest songs, only on JioSaavn.com
As an example, they point to rules that make it harder to obtain official permission to build a church than a mosque.

Last month, a court sentenced a Muslim to death for killing two people in a dispute with Christians in a southern town.
© Thomson Reuters 2013