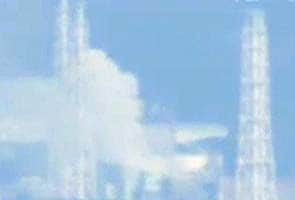 Tokyo: The company that runs the troubled Fukushima Daiichi plant in northeastern Japan announced on Wednesday that a fire was burning there, just hours after officials said flames that erupted on Tuesday had been doused. (In Pics: Japan earthquake triggers tsunami)

Soon after that announcement, a government official at Japan's nuclear watchdog agency said that flames and smoke were no longer visible, but he cautioned that it was unclear if the fire had died out. The official, Minoru Ogoda, said it was also unclear if this was a new fire or if the fire on Tuesday had never really gone out. (Watch: NDTV Ground Report - Japan's nuclear crisis)

It is too dangerous for workers to get near the reactor, No. 4, to determine exactly what is happening.

The reports are a troubling reminder of the difficulties the company is having bringing the plant, which has suffered multiple explosions since Saturday, under control. The situation became especially dire on Tuesday, when releases of radiation led the company to pull most of its workers from the plant. (Read: Third blast at N-plant)

The authorities are especially concerned about pools for spent fuel rods at several reactors at the plant, including No. 4, where the pool has lost some of the water needed to keep the fuel rods stable. The rods are still radioactive and potentially as hot and dangerous as the fuel rods inside the reactors. (Read: Spent fuel rods in Japanese nuclear reactors a long-term risk)

Mr. Ogoda said a proposed plan to use helicopters to put more cold water into the pool was looking unlikely.

He said the Tokyo Electric Power Company, which runs the plant, would probably try to spray water into the reactor building through a gaping hole in the wall blasted open by an earlier explosion. (Read: Japan's multiple crises)

The hole or holes in the roof caused by that blast did not appear big enough to allow sufficient amounts of water in, he said.

That explosion on Tuesday was caused by hydrogen gas bubbling up from chemical reactions set off by the fuel rods in the pool, Japanese officials said. Inspectors from the United States Nuclear Regulatory Commission said they had been told that what was burning was lubricating oil from machinery near the pool.

Concern remained high about the storage pools at that reactor and at two other reactors, Nos. 5 and 6. None of those three reactors at the plant, 140 miles northeast of Tokyo, were operating on Friday afternoon when an offshore earthquake with a magnitude now estimated at 9.0 shook the site. A tsunami rolled into the northeast Japanese coastline minutes later, swamping the plant. (Read: Two new earthquakes rattle Tokyo)

At least 750 workers were evacuated on Tuesday morning after a separate explosion ruptured the inner containment building at Reactor No. 2 at the Daiichi plant, which was crippled by Friday's earthquake and tsunami. The closely spaced but apparently coincidental explosions at Reactors Nos. 2 and 4 together released a surge of radiation 800 times as intense as the recommended hourly exposure limit in Japan. (Read: Most plant workers evacuated, radiation levels rise)

But 50 workers stayed behind, a crew no larger than would be stationed at the plant on a quiet spring day. Taking shelter when possible in the reactor's control room, which is heavily shielded from radiation, they struggled through the morning and afternoon to keep hundreds of gallons of seawater a minute flowing through temporary fire pumps into the three stricken reactors, Nos. 1, 2 and 3, where overheated fuel rods continued to boil away the water at a brisk pace.   (Read: Japan's multiple crises as death toll rises)

By early afternoon radiation levels had plunged, according to the International Atomic Energy Agency. Workers have released surges of radiation each time they bleed radioactive steam from the troubled reactors in an attempt to manage the pressure inside them, but the reactors are not yet releasing high levels of radiation on a sustained basis, Japanese officials said.

The United States military revised its plans as radiation from the plant worsened. Some American warships that had been expected to arrive at the tsunami-shattered northeast coast of Honshu Island were diverted to the west coast instead because of concerns about radiation, the Navy said.

The Navy also promised to continue relief missions even though several more helicopter crews were testing positive for low-level exposure to radiation, and even as American military personnel and their families at the Yokosuka and Atsugi bases were encouraged to take precautions against radiation exposure. (Watch: Biggest quake in 140 years)

The chief cabinet secretary, Yukio Edano, urged people who live within about 18 miles of the plant to take precautions. "Please do not go outside, please stay indoors, please close windows and make your homes airtight," he said. More than 100,000 people are believed to be in the area. (Read: Japan PM upset with handling of N-plant crisis)

Yukiya Amano, the director general of the International Atomic Energy Agency, said at the organization's Vienna headquarters that there was a "possibility of core damage" at reactor No. 2, but that the damage "is estimated to be less than 5 percent of the fuel."

The sudden turn of events, after an explosion on Monday at one reactor and then an early-morning explosion on Tuesday at yet another -- the third in four days at the plant -- had already made the crisis at the plant the worst nuclear accident since the Chernobyl reactor disaster a quarter-century ago. It had become impossible for workers to remain at many areas within the plant for extended periods, the agency said. Japan has requested assistance from the agency and the Nuclear Regulatory Commission.

In Tokyo, the metropolitan government said on Tuesday that it had detected radiation levels 20 times above normal over the city, though it stressed that such levels posed no immediate health threat and that readings had dropped since then. The explosion in Reactor No. 2, a little after 6 a.m. on Tuesday, particularly alarmed Japanese officials and nuclear power experts around the world because it was the first detonation at the plant that appeared to occur inside one of the primary containment buildings.

Those buildings are fortresslike structures of steel and reinforced concrete, designed to absorb the impact of a plane crash and minimize radiation leaks. After a series of conflicting reports about how much damage the reactor had sustained after that blast, Mr. Edano said, "There is a very high probability that a portion of the containment vessel was damaged." (Read: For Japan's elderly, echoes of war's horrors)

Japanese officials subsequently said that the explosion had damaged a doughnut-shaped steel container of water, known as a torus, that surrounds the base of the reactor vessel inside the primary containment building.

Ruptures in the torus are serious, said Michael Friedlander, a senior nuclear power plant operator for 13 years at three plants in the United States, including three years at a General Electric boiling water reactor very similar to the ones in trouble in Japan. But the torus is not as important as the reactor vessel itself, which has 6.7-inch-thick steel walls and 8.4-inch-thick steel for its roof and floor. The vessel is designed to hold very high-pressure steam as well as the uranium fuel rods.

The reactor vessel has 20 safety valves that during a shutdown of the reactor inject steam into a million-gallon "suppression pool" of water in a steel torus immediately underneath it.

The atmosphere in the primary containment building, around the reactor vessel and above the suppression pool, is supposed to consist of inert nitrogen, with no oxygen at all. An inert atmosphere is used in the primary containment building to avoid the risk of oxygen explosions with hydrogen if the reactor starts producing much larger quantities of hydrogen gas than usual. Hydrogen gas is highly combustible with oxygen.

Promoted
Listen to the latest songs, only on JioSaavn.com
The storage pool blast at reactor No. 4 also appears to have ripped a hole in a secondary containment building, based on initial descriptions from Japanese officials.

Earlier, industry executives in close contact with officials in Japan expressed extreme concern that the authorities were close to losing control over the fuel melting in three reactors at Daiichi.