Women in Iran have been forbidden from attending all-male sporting events since a year after the 1979 Islamic revolution, but last year authorities overturned a ban on women attending volleyball games. 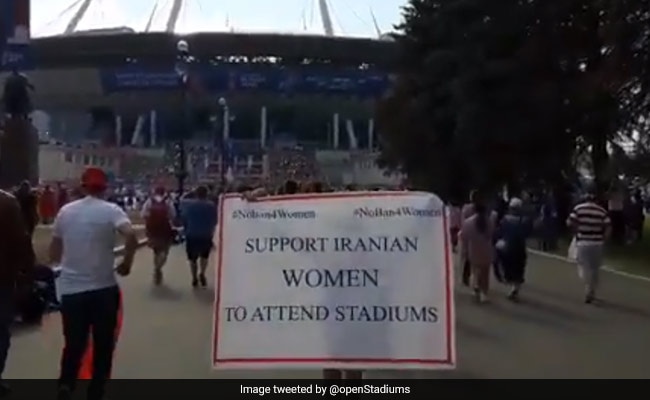 St. Petersburg, Russia: Iranian women, who have been banned from soccer stadiums in the Islamic republic since 1980, have taken their protest to the globe's biggest sporting event: the World Cup.

For the first time in the tournament's history, female soccer fans staged demonstrations inside a stadium, hoisting posters against the ban during Friday's match between Iran and Morocco in Russia's cultural capital.

"Iran doesn't want to see happy women in the stadium," said Sara, 34, a member of a group called OpenStadiums that works in Iran to overturn the ban. She, along with the other Iranian women in this story, spoke on the condition of partial anonymity out of fears of being arrested upon returning to Iran. "They're worried about what else we'll want."

During her protest she wore a hijab - rare for her when traveling outside of Iran - to disguise her face and so that she would look no different than the women back home. "It was amazing to see how many people reacted positively, taking pictures [of my banner]," she said. 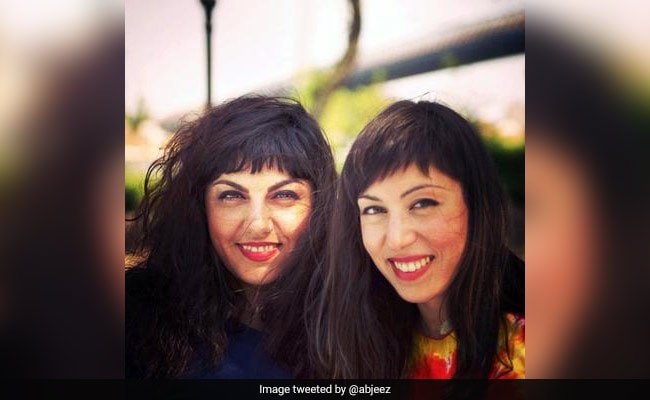 Ahead of the World Cup, the Iranian reggae band Abjeez released a song in support of allowing women into soccer stadiums

Women in Iran have been forbidden from attending all-male sporting events since a year after the 1979 Islamic revolution, but last year authorities overturned a ban on women attending volleyball games. That change happened after British-Iranian student Ghoncheh Ghavami spent more than three months in prison, much of it in solitary confinement, because she tried to get into a volleyball match.

Many hope the volleyball decision is a signal that women will soon be allowed to watch the country's favorite sport.

"Iranian women have been made even more vulnerable by the poor economic situation," Sara said. "Let us be free, let us watch the games."

Female sports fans have gone to great lengths to defy the ban, donning beards and wigs to sneak into stadiums in Iran. Authorities have arrested and detained women they find at the matches.

Activists said the lifting of the same ban in geopolitical and religious rival Saudi Arabia this year only added insult to injury.

"That's humiliating to us," said Maryam, an Iranian civil rights activist who has lived in the United States for the past six years. One of several protesting the ban Friday in the St. Petersburg stadium, she arrived dressed in large aviator sunglasses and a silver visor and held up a sign that read, "Support Iranian women to attend stadiums."

Ahead of the World Cup, the Iranian reggae band Abjeez released a song in support of allowing women into soccer stadiums. The opening lyrics go, "The empty seat by your side is my place/To have me by your side is your right. It's my right!"

When Gianni Infantino, the head of global soccer federation FIFA, visited Iran's capital in March, 35 women were detained for trying to get into the Azadi stadium, the Iranian capital's largest sports complex. Infantino said he raised the issue of the ban with Iranian authorities and urged them to reconsider.

He said he was assured by President Hassan Rouhani that the country would soon allow women to watch soccer matches. But Iranian women were unimpressed.

"FIFA shouldn't take sides, but apparently they do," said Maryam. She said she thinks Iranian men are beginning to believe in their fight. Last year, she was high-fived by fans exiting the Azadi stadium in Tehran, where she held up a large banner in Farsi.

On Friday, on the other side of St. Petersburg under the light evening sky, Iranian women gathered to watch their team on large screens outside.

Roshanak, a 31-year-old from Tehran, Iran, watched the game, transfixed. Her face painted in swirly designs in Iran's red, white and green colors, she would soon watch in a stadium as her country plays against Portugal in Saransk, Russia in 10 days.

Promoted
Listen to the latest songs, only on JioSaavn.com
"This will be my first-ever live game," she said. "Of course I want us to win, but being there is victory for me."