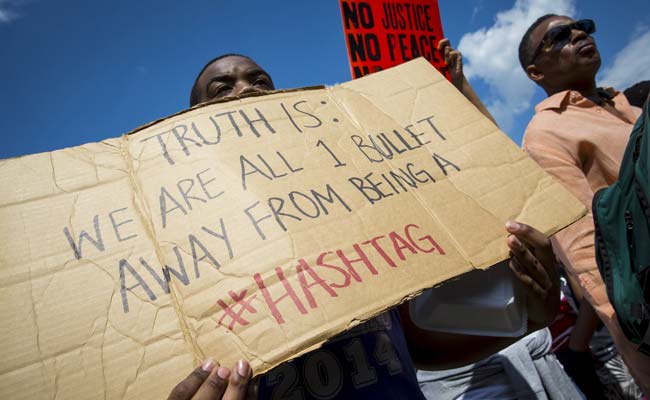 Demonstrators hold signs at a rally at City Hall in Baltimore, Maryland May 2, 2015. (Reuters)

BALTIMORE:
Thousands of people took to the streets of Baltimore on Saturday as anger over the death of a young black man turned to hopes for change following swift criminal charges against six police officers.

There was an upbeat mood at the march from the housing projects where 25-year-old Freddie Gray was arrested last month to a plaza in front of city hall where the city's chief prosecutor announced charges on Friday ranging from murder to assault in his death.

A 10 pm curfew was kept in place for Saturday, but police were in uniform rather than riot gear and relaxed marchers snapped selfies with officers as the protest moved to the West Baltimore intersection that was the scene of looting on Monday.

Rioting and looting broke out after the funeral for Gray, who died on April 19, a week after suffering a fatal spinal injury while in police custody.

Many in the largely black city erupted with joy after the officers involved in the arrest were charged, in contrast to what happened after the deaths of unarmed black men over the past year in Ferguson, Missouri, and New York, where authorities found police broke no laws and officers involved were not charged.

While the charges announced by prosecutor Marilyn Mosby brought relief to the city of 620,000, residents said they needed to see justice served, not only in Baltimore but in other US communities where they feel minorities are disproportionately targeted and badly treated by police.

Using social media hashtags #BlackLivesMatter and #BlackSpring, rallies were also planned on Saturday in more than 20 US cities including Dallas, New York and Los Angeles.

Businesses and protesters in Baltimore said they were fed up with the curfew and ready to move on.

"It's unnecessary. The riot is over. The kids did what they did but that's done. This is all peaceful protest," said James Brown Jr, 27, as a crowd of a few hundred people danced on the street. "There is nothing to be angry about. We got what we wanted."

On Friday, Mosby said the Maryland state medical examiner had ruled Gray's death a homicide. She said he was unlawfully arrested and the officers repeatedly ignored his pleas for medical help while he was handcuffed, shackled and lying face down in the back of a police van.

Gene Ryan, president of the Baltimore Fraternal Order of Police, said he was disappointed with "the apparent rush to judgment" in charging the officers and that they had done nothing wrong.

The union launched an online fundraising plea on its website on Saturday to cover legal expenses for the officers. Online Maryland court records did not list a defense attorney for any of the six - three black and three white officers.

They were released on bond on Friday.

No dates have been set for trials but speakers at Saturday's rally in front of city hall urged people to ensure that they were registered to vote, so that they can be called as jurors.

Promoted
Listen to the latest songs, only on JioSaavn.com
"We can't get justice for Freddie without 12 jurors for Freddie. Get registered," said civil rights activist Kim Trueheart.

Baltimore residents have largely heeded the curfew, put in place after Monday when protests turned violent and dozens of buildings and vehicles were burned. Twenty police were officers injured and more than 200 people arrested in the unrest.
© Thomson Reuters 2015