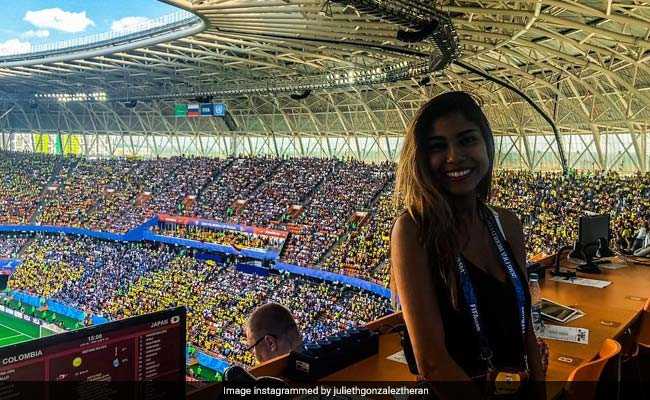 A female reporter who said she only wants to talk about soccer "systems and strategy" was groped and kissed by a man last week as she attempted to do a live World Cup broadcast.

"RESPECT! We do not deserve this treatment," she wrote in Spanish on an Instagram post that contained video of the incident. "We are equally valuable and professionals. I share the joy of football, but we must identify the limits of affection and harassment."

In the video, the man, who has not been identified, runs up as Gonzalez Theran is speaking, appearing to touch her breast as he swoops in to kiss her on the cheek, and then runs off.

"I had been at the scene for two hours to prepare for the broadcast and there had been no interruptions," she added. "When we went live, this fan took advantage of the situation. But afterwards, when I checked to see if he was still there, he was gone."

Gonzalez Theran, who is from Colombia and is based in Berlin according to her Instagram profile, has also worked for ESPN as a freelancer, providing soccer reports from Germany.

"Lots of people think that the reporter is only there to bring some color to the picture," she told Deutsche Welle, "but we want to talk about systems and strategy."

"I feel for her, because this type of attack has happened several times in the past," Steinhaus told Deutsche Welle. "Don't kid yourself that similar misogynist things do not happen."

Promoted
Listen to the latest songs, only on JioSaavn.com
"For me it is an isolated incident," she said. "There are always fans that compliment you and behave respectfully. This one went too far."