FBI team in Turkey to probe US embassy attack 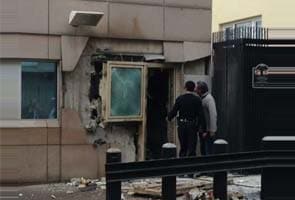 Ankara: The United States has sent an FBI team to join the Turkish investigation into a deadly suicide bombing on the US embassy in Ankara last week, the mission said on Wednesday.

Friday's bombing, the second attack on a US diplomatic mission in five months, was claimed by a radical leftwing group the Revolutionary People's Liberation Front (DHKP-C).

"The DHKP-C has put itself squarely in the path of American justice," US embassy spokesman TJ Grubisha said.

"An FBI team has arrived in Turkey in order to cooperate with Turkish authorities," he added.

"The United States will work with Turkey and other countries to gather intelligence and evidence to use against the DHKP-C."

A Turkish security guard was killed and three other people wounded in the attack.

The DHKP-C, which is fiercely anti-US and is blacklisted by Washington and the European Union as a terrorist organisation, identified the bomber as Alisan Sanli.

Sanli was previously jailed in Turkey for his involvement in an attack on an Istanbul military compound in 1997.

Promoted
Listen to the latest songs, only on JioSaavn.com
The group has carried out several attacks in Turkey since the 1970s, sometimes targeting prominent figures.