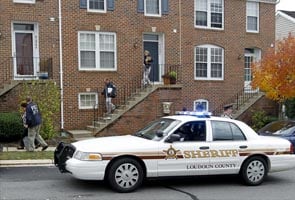 Washington: The FBI says it learned in January that a Pakistani-born man arrested in the DC subway-bomb sting was trying to make contact with terrorist groups to help him participate in jihad against US forces overseas.

FBI agent Charles Davoub says in an affidavit unsealed on Thursday that Farooque Ahmed and an unnamed associate hoped to fight in Afghanistan or Pakistan early next year.

Davoub also says that Ahmed either bought, or tried to buy, weapons in May 2008 and February 2009 and is believed to have used firearms to train for his goal of traveling to Afghanistan to kill Americans.

For more than six months, 34-year-old Farooque Ahmed went quietly about his business: casing Washington-area subway stations, sketching diagrams and shooting video, sizing up how best to kill the most people, police say.

Rolling suitcases filled with explosives would be better than backpacks, he allegedly told others, and rush hour would be the best time to strike.

The Pakistani-born Virginian thought he was working for Al-Qaida operatives, according to the FBI. In fact, the plot was a ruse: The information went to people working on behalf of the US government, according to a federal law enforcement official.

Ahmed, a naturalized citizen, was arrested on Wednesday, the latest alleged example of homegrown terrorism.

"You never know who lives around you," said Margaret Petney, who lives on the same block as Ahmed in Ashburn, Va., outside Washington.

Last week, a Hawaii man was arrested and accused of making false statements to the FBI about his plans to attend terrorist training in Pakistan. In August, a Virginia man was caught trying to leave the country to go fight with an al-Qaida-affiliated group in Somalia. And in May, Faisal Shazhad, a naturalized citizen from Pakistan, tried to set off a car bomb at a bustling street corner in New York.

The FBI stressed that in the latest case, the public never was in danger. FBI agents were monitoring Ahmed's activities throughout the sting, the agency said.

Nonetheless, US Attorney Neil MacBride said it was "chilling that a man from Ashburn is accused of casing rail stations with the goal of killing as many Metro riders as possible through simultaneous bomb attacks."

Chilling, especially, for Washington-area commuters, who live with the memory of the 9/11 attack on the Pentagon.

"As I look around, I think about how vulnerable we are," said 45-year-old McCarthy Council, who lives near the Pentagon City Metro station. "I'm just going to stay off the Metro system for now."

But Mary Brereton, 55, a personal trainer who lives in nearby Alexandria, Va., said she was more worried about the safety record of Metro's subway trains than the potential for a terrorist attack.

Ahmed, bearded and wearing glasses, made a brief court appearance on Wednesday in federal court in Alexandria. He didn't enter a plea and was ordered held without bond. He said he couldn't afford a lawyer. He faces up to 50 years in prison if convicted.

In a nine-page indictment, federal investigators alleged that, starting in April, Ahmed met several times with people he believed were Al-Qaida operatives. He told them "he might be ready to travel overseas to conduct jihad in January 2011" after completing a hajj to Saudi Arabia he planned for November of this year, the document states. Date by date, the document lays out Ahmed's alleged activities and meetings in support of the fake bomb plot to be carried out in 2011.

According to the indictment:

--Ahmed took video of four northern Virginia subway stations -- Arlington Cemetery, Courthouse, Pentagon City and Crystal City, which is near the Pentagon -- and monitored security at a hotel in the District of Columbia. In a series of meetings at hotels in northern Virginia, Ahmed provided the videos to someone he believed was part of a terrorist organization and said he wanted to donate $10,000 to help the overseas fight and collect donations in a way "that would not raise red flags."

In a September 28 meeting in a Herndon, Va., hotel, Ahmed suggested that terror operatives use rolling suitcases instead of backpacks to blow up the subway. During that same meeting, Ahmed said he wanted to kill as many military personnel as possible and suggested an additional attack on a Crystal City subway station.

The indictment alleges he also handed over diagrams of the Arlington subway stations and gave suggestions about where to put explosives on trains to kill the most people in simultaneous attacks.

At the White House, press secretary Robert Gibbs said President Barack Obama was aware of the investigation before Ahmed was arrested. Gibbs also offered assurances that the public was never in danger. There are no indications Ahmed was connected with larger terrorist groups like Al-Qaida, according to a US counterterrorism official, who requested anonymity to discuss an intelligence matter.

Andrew Ames, a spokesman for the FBI Washington field office, declined to comment on how authorities learned about Ahmed. The Washington Post quoted an unidentified administration official as saying Ahmed drew the attention of law enforcement officials by seeking to obtain unspecified materials.

The FBI has made several cases with agents working undercover: Last year, authorities arrested a Jordanian national after he tried to detonate what he thought was a bomb outside a Dallas skyscraper. In an unrelated case, authorities in Springfield, Ill., arrested a man after he tried to set off what he thought were explosives in a van outside a federal courthouse. In both cases, decoy devices were provided to the men by FBI agents posing as Al-Qaida operatives.

A LinkedIn page that was created for Farooque Ahmed identifies him as a network planning engineer with a bachelor's degree in computer science from the City College of New York in 2003, during the same period that other records showed he had been living in New York. In Reston, Va., Ericsson Federal Inc. issued a statement confirming that Ahmed had done contract work for the company.

A check of legal records for Ahmed found several traffic offenses in Virginia, including speeding.

Neighbor Petney said Ahmed moved in about a year and a half ago with his wife and young child, and that they wore traditional Muslim clothing.

Ahmed's wife, Sahar, joined the Hip Muslim Moms, a support group for women with children under 5 years old, and brought her young son to play dates with other mothers, said group organizer Esraa Bani. She had moved to the area and was looking for a mothers group when she joined. She was very quiet and kept to herself.

Petney observed that "they didn't seem to be too friendly with anybody."
Comments
FBIsubway terror suspect