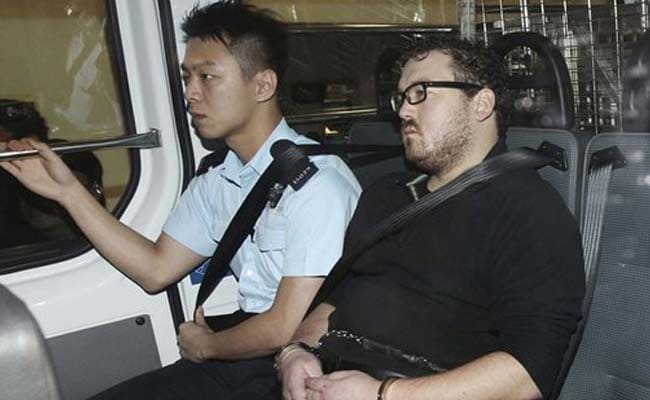 Rurik George Caton Jutting, right, escorted by a police before appearing in a court in Hong Kong. (Associated Press)

Cilacap, Indonesia: The father of a young Indonesian woman murdered in Hong Kong called on Tuesday for her "sadistic" killer to be put to death, a day after a British banker appeared in court accused of killing her and a second woman.

The mutilated and decomposing body of Sumarti Ningsih, in her 20s, was found on Saturday in a suitcase on the balcony of Rurik Jutting's upmarket apartment in the southern Chinese city.

Jutting, a 29-year-old securities trader, who until recently worked at Bank of America Merrill Lynch, had called police to his home in Wanchai district in the early hours of Saturday.

Investigators found a naked woman with knife wounds to her neck and buttocks in the living room of the flat, on the 31st floor of a plush residential block.

Ningsih's body was discovered hours later as police searched the apartment court documents state that she was killed on October 27.

Her father spoke to AFP of his shock and anger at his daughter's death.

"I want the murderer of my child to be sentenced to death. He killed her, sadistically, so he must be put to death," said Ahmad Kaliman, 58, speaking to AFP in Cilacap, a port town on the south coast of Java.

Hong Kong does not impose the death penalty.

"I also plead for the governments of Indonesia and Hong Kong to return our child's body as soon as possible. I want her to be buried in Indonesia," he added.

He said the family had been informed by one of their daughter's acquaintances in Hong Kong that she had been killed.

"We were informed by telephone that our daughter was murdered. I was very shocked, especially when I was informed that it was hard to identify the body," he said.

Police reportedly believe the victims were sex workers, but Ningsih's father had told her parents she was working in a restaurant in Hong Kong.

Kaliman said his daughter had first gone to Hong Kong in 2011 to work as a domestic helper, before returning to Indonesia in 2013. She had returned to Hong Kong on two occasions since then.

The Indonesian consulate confirmed to AFP on Tuesday that the other victim found in the apartment was Seneng Mujiasih, 29 who went by the name Jesse Lorena and was also Indonesian.

She had been working as a domestic helper, the consulate said, but her employment visa had run out in 2012.

Jutting appeared in court for the first time on Monday, when he was charged and remanded in custody.
Comments
Hong Kong double murderHong Kong British manIndonesian women murder