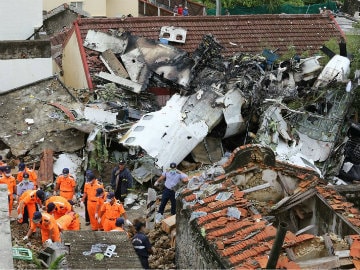 Taipei: Taiwanese authorities said on Friday that black boxes from the TransAsia Airways flight that crashed last week, killing 48 people, showed no distress call was recorded before the plane plunged into houses after an aborted landing.

Flight GE222 carrying 54 passengers and four crew crashed near the airport in Magong in the Penghu islands last Wednesday, leaving just 10 survivors, some of them badly injured. Two French nationals were among the dead.

The ATR 72-500 propeller plane aborted its first attempt to land during thunder and heavy rain as Typhoon Matmo pounded Taiwan, officials have said.

Examination of the plane's two black boxes -- which record cockpit voice and other in-flight data -- showed that the two pilots had discussed among themselves to request a go-around.

The request was made to the control tower three seconds before the recordings stopped, said the Aviation Safety Council, in the first findings from the black boxes to be made public.

Two unidentified sounds were also recorded shortly before the plane crashed, likely the sounds of the plane colliding with woods about one kilometre off the airport and then plunging into ground, said Thomas Wang, director of the council.

No distress call was recorded in the black boxes, Wang said, adding that the transcript of the black boxes will be released at a later date pending verification by relevant authorities of its accuracy.

"From the black box recordings we constructed the flight path of the plane showing it veered off the due descending course then colliding with trees and houses but the cause of the crash it is still under investigation," Wang said, adding a final report on the incident is expected in 18 months.

Promoted
Listen to the latest songs, only on JioSaavn.com
Angry relatives have blamed the authorities and TransAsia for the worst air disaster in a decade in Taiwan, questioning why the plane was cleared to take off in stormy weather.

Taiwanese officials have defended the decision to allow the flight to go ahead, saying the meteorology data showed that aviation safety requirements were met when the plane was cleared to fly.