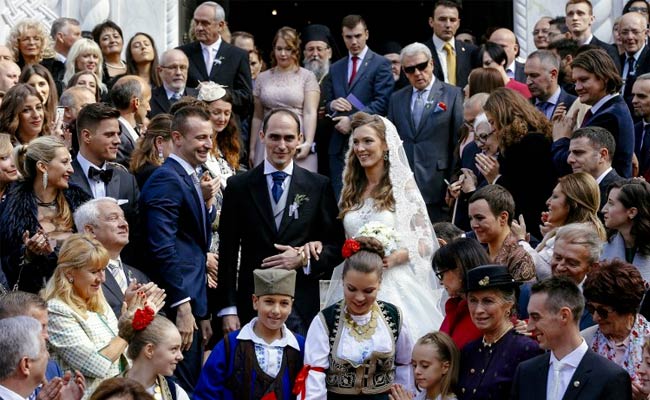 Oplenac, Serbia: At the wedding of his grandfather, King Aleksandar I of Yugoslavia, nearly a century ago, more than 100,000 people thronged Belgrade's streets in heavy rain to celebrate.

Prince Mihajlo Karadjordjevic's wedding on Sunday was a somewhat lower profile event -- covered by the tabloids but largely ignored by other media, leaving some Serbians completely unaware of the first "royal" wedding in decades.

The 30-year-old prince married Ljubica Ljubisavljevic, a Belgrade-born pharmacist, at the Orthodox Church of St George at Oplenac in central Serbia, where members of the Karadjordjevic dynasty are buried.

Just 150 or so royalists gathered outside the service, which was attended by about 300 guests.

Among them were children in traditional Serbian dress, foreign dignitaries and other members of the royal family including Crown Prince Aleksandar II, claimant to Serbia's abolished throne.

The Karadjordjevic dynasty was founded by Djordje Petrovic, known as Karadjordje ("Black George"), who came from a family of pig farmers but led the first Serbian uprising against Ottoman rule in the early 19th century.

Aside from a cousin's ceremony 20 years ago, the last royal wedding in Serbia was the celebrated Belgrade marriage of King Aleksandar I and Princess Maria of Romania in June 1922, considered an important Balkan political union.

Aleksandar was later assassinated in the French city of Marseille and succeeded by his son Petar II, who fled the Nazi occupation of his country just days after being proclaimed monarch at the age of 17.

He spent the remainder of World War II in Britain but was prevented from returning to Yugoslavia by the communist regime of Josip Broz Tito, which abolished the monarchy.

Petar died in the United States and his family was allowed to return to Serbia by the post-communist authorities in the early 2000s, but today the royals struggle to stay relevant among citizens of the republic.

Promoted
Listen to the latest songs, only on JioSaavn.com
Mihajlo, son of Petar's younger brother Tomislav, was born in London and returned to live in Serbia in his twenties.

His Serbian wedding follows a civil ceremony in London, and he told local media this month that he and his bride "would like to live near Belgrade, so that we can breed horses and always be surrounded by nature".
Comments
King Aleksandar IPrince Mihajlo KaradjordjevicKing Aleksandar I of YugoslaviaLjubica Ljubisavljevic