Factbox: The Hunt for the Paris Attackers 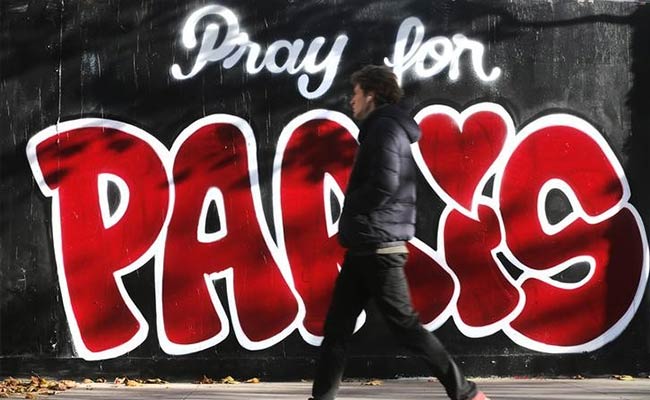 Seven dead assailants played direct roles in the November 13 attacks: three at the Bataclan concert hall, three outside the Stade de France stadium and one in the cafe killings. (Reuters Photo)

France and Belgium are trying to track down any living assailants and would-be assailants following the Friday, November 13, attacks in Paris.

French authorities say the suspected ringleader, Belgian Abdelhamid Abaaoud, was among those killed in a police assault in St Denis, north of Paris, on Wednesday.

Here's what we know about those who died in the Paris attacks and Wednesday's assault, as well as others key to investigations.

November 13: Seven dead assailants played direct roles in the November 13 attacks: three at the Bataclan concert hall, three outside the Stade de France stadium and one in the cafe killings.

November 18: Three people died and eight were arrested in a police assault on a flat in a building in St Denis. One of the three bodies has been identified as suspected ringleader Abaaoud.

Abaaoud, 28, grew up in the Molenbeek district of Brussels, but vanished in 2013 and showed up in Syria. Local media say he was jailed for robbery in 2010 and spent time in prison alongside Salah Abdeslam. His presence in the St Denis flat was the reason for the police assault. Before the attacks, European governments believed Abaaoud was still in Syria.

Closed circuit TV coverage shows Abaaoud going into the Crois de Chavaux metro railway station in Paris, near where a Seat Leon used in attacks was found, according to police. His fingerprints were found on one of three AK47 assault rifles left in the car, along with five full and 11 empty ammunition clips.

This footage, which places Abaaoud at the station soon after the first shootings but while the attack at the concert hall was still underway, has prompted speculation that he may have taken part directly in the attacks, and not just organised them.

Salah Abdeslam, 26, French, born in Brussels (Sept. 15, 1989). Suspected of having rented a black VW Polo car and a Renault Clio used in the attacks on the concert hall in Paris and the stadium. Investigators say he went to Belgium from France the day after the attacks in a VW Golf, despite being stopped by French police along the way. His brother, Brahim, was killed in the attack (below).

French PM Manual Valls said on Nov. 19 that Salah's whereabouts were unknown. Fears that he is back in Belgium and plotting further attacks prompted the cancellation of an international soccer match in Brussels.

Ismail Omar Mostefai, 29 (born Nov. 21, 1985), Frenchman of Algerian descent involved in the Nov. 13. Bataclan attack, lived for a time in Chartres area, southwest of Paris. Born in Courcouronnes, south of Paris. Source: prosecutor's office/judiciary sources. His name was put on French intelligence services' "S notice" in 2010 for reported radicalisation. An unnamed senior Turkish government official says Turkey contacted France about Mostefai in December 2014 and June 2015 but only got a return request for information on him after the Paris attacks.

Samy Amimour, 28 (born Oct. 15, 1987), involved in Nov. 13. Bataclan attack. French, from Drancy near St. Denis. Subject of international arrest warrant since late 2013. Had been under official investigation since October 2012 on suspicion of terrorism-related activity over a plan to go to Yemen. Source: Paris prosecutor's office statement.

Brahim Abdeslam, 31 (born July 30, 1984), French, resident of Belgium. Blew himself up at Comptoir Voltaire cafe in Paris in the Nov. 13 attack. Brother of Salah and Mohamad Abdeslam. His fingerprints were found on one of the AK47 rifles left in the Seat Leon car.

Other: A man blew himself up outside Gate D at the Stade de France. A passport found near his dead body has the name of Ahmad Al Mohammad, 25, (born Sept. 10, 1990), from Idlib, northwest Syria. Passport is being checked. His fingerprints match up with prints of a person registered under that name as arriving in Greece in Oct. 3 2015. Source: French prosecutor's office.

Other: The fingerprints of a third man who blew himself up outside Gate H of the Stade de France show that he passed through Greece at the same time as the other unidentified stadium suicide bomber, prosecutors say.

Hasna Aitboulahcen: Woman, 26, who died during the Nov. 18 police assault on the building in the northern suburb. Police were tapping her phone as part of a drugs investigation and watched her lead Abaaoud back to the apartment before the raid. Investigators have backtracked from initial reports that she blew herself up during the raid, saying another person in the apartment had detonated a suicide vest.

Other: Third person who died in Nov. 18 assault. Investigators have isolated the person's DNA but have yet to identify them.

Eight were taken into custody in the Nov. 18 raid, of whom three were pulled from the targeted flat and two more from the rubble of the building where the apartment was located. Another three were arrested in the vicinity: the man believed to have provided the apartment, a woman who was with him, and another man.

Jawad Bendaoud, the man believed to have provided the accommodation, is still in custody. Prosecutors extended his custody for a fifth day on Sunday, Nov. 22. The other seven people being questioned have all been released.

As of Friday, police have searched 793 premises, held 90 people for questioning, put 164 under house arrest and recovered 174 weapons, according to the Interior Ministry.

Three people are being held in custody on terrorism charges, two detained on Nov. 14, another on November 19.

Lawyer Xavier Carette told RTBF his client Mohammad Amri and a friend were unwitting accomplices who knew nothing about any role in attacks when Amri drove Salah Abdeslam back from Paris to Brussels on night of November 13-14. Mohammad Abdeslam, brother of Salah and Brahim (dead), was among five released after preliminary questioning. Police searched nine addresses on Nov. 19 in relation to the Paris attacks and are still holding one person who has been charged with terrorism offences after weapons were found at the person's home. Much of the focus is on Molenbeek, a poor Brussels district that is home to many Muslim immigrants.
© Thomson Reuters 2015