The section, which launched in 2014, was designed to help people quickly find interesting topics on Facebook. 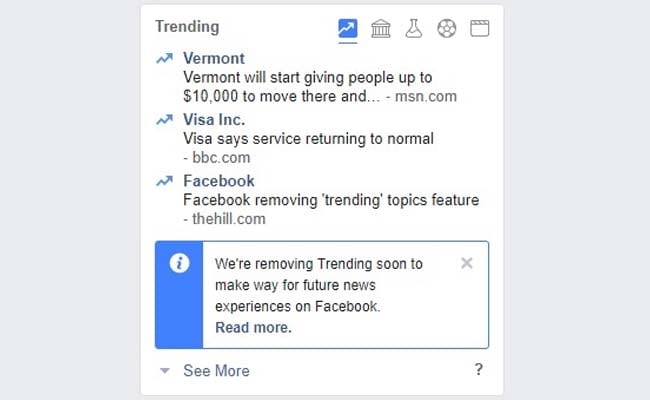 The section, which launched in 2014, was designed to help people quickly find interesting topics on Facebook. But Alex Hardiman, the company's head of news products, said in a blog post that users are shifting to consuming news on their phones and through video.

"So we're exploring new ways to help people stay informed about timely, breaking news that matters to them, while making sure the news they see on Facebook is from trustworthy and quality sources," she said.

The trending section had been a headache for the company. It amassed notoriety in 2016 after a Gizmodo report that detailed allegations of the trending team suppressing conservative news. The backlash from conservatives led Facebook chief executive Mark Zuckerberg to extend an olive branch, holding a meeting at his company headquarters with more than two dozen conservative figures including Glenn Beck, Dana Perino and Tucker Carlson. Facebook eventually fired the editors on the trending team, replacing them with an automated process.

But the curation of trending news in the absence of human oversight led to more blowback and embarrassment. The algorithms promoted 9/11 conspiracy theories, a false story about then-Fox News host Megyn Kelly, and a parody news article about magical iPhone features, which some say were early indicators of Facebook's misinformation problem. The company continued to modify the section, but Facebook said that over time it became less useful to users.

Media analysts have argued that Facebook's reaction to claims of anti-conservative bias led the company to take a more lax approach to the Russian disinformation campaign. Facebook continues to face criticism from right-leaning circles. In recent months, Facebook has launched several initiatives to address accusations of political bias, misinformation and transparency in political advertising.

The company has also been reeling from the Cambridge Analytica scandal. Lawmakers in Congress and in Europe have raised the possibility of drafting new regulations to address Facebook's privacy violations. Some critics have even called on antitrust officials to break the company up.

In Friday's announcement, Facebook also said that 80 publishers are testing a "breaking news" label that they can pin to their articles in the news feed. The company is simultaneously experimenting with a breaking-news notification, a section dedicated to breaking local news, and a video feature for American users to watch live coverage and weekly reports.

Promoted
Listen to the latest songs, only on JioSaavn.com
Hardiman said that Facebook will remove the trending section next week.

(Except for the headline, this story has not been edited by NDTV staff and is published from a syndicated feed.)
Comments
FacebookFacebook trending section