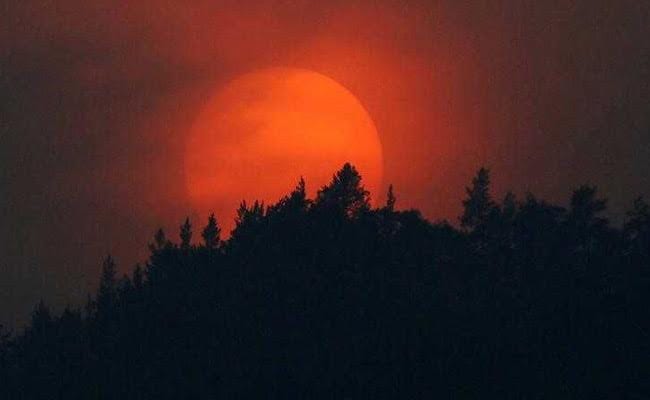 Wednesday marked the summer solstice, the longest day of the year.

Singapore: Extreme heat across large tracts of the Northern Hemisphere raised fears for crops in China, fuelled forest fires in Portugal and Russia's Far East, forced flight cancellations in the Southwest US, and melted tarmac on roads in Britain.

As Wednesday marked the summer solstice, the longest day of the year, forecasters said temperatures in Paris were expected to hit 37 Celsius (100 Fahrenheit), Madrid could see 38C, and London was set for 34C with warnings of thunderstorms.

Rounding up the record temperatures set in the past two months, the World Meteorological Organization (WMO) said the Earth was experiencing "another exceptionally warm year" and the heatwaves were unusually early.

"Parts of Europe, the Middle East, North Africa and the United States of America have seen extremely high May and June temperatures, with a number of records broken," the WMO said late on Tuesday.

The trend seen during the past two months has put average monthly global temperatures among the highest ever recorded since data began to be collated in 1880.

Even before this month, US National Oceanic and Atmospheric Administration (NOAA) data showed Europe, the United States and Northeast Asia - including eastern China, Japan and South Korea had experienced unusually warm weather between March and May.

In China, the world's top grain producer, hot and dry conditions in the main corn belt have delayed plantings and stunted crop development, especially in the province of Liaoning where soil moisture levels are at their lowest in at least five years.

Thomson Reuters Eikon data shows that precipitation in Liaoning for the past month has been between 40 and 60 percent below the seasonal norm.

"The drought that hit parts of China's northeast is the worst for this time of the year in the past decade, in the breadth of areas it has affected and the length of time it has lasted," Ma Wenfeng, analyst at Beijing Orient Agribusiness Consultancy, said.

The hot, dry weather is a major factor behind forest fires that have killed dozens of people in Portugal, while the Russian news agency Tass reported scores of forest fires, mostly in Siberia and the far east region of Irkutsk.

In the US Southwest, flights were cancelled mostly by regional airlines whose aircraft operate at a lower maximum temperature.

And in Britain, regional media in the southeast county of Surrey reported that the intense sun had melted tarmac roads.

Solar power generation was expected to surge in Germany on Wednesday, with Eikon data showing a potential of 27,500 megawatt-hour (MWh) could be generated, compared to a seasonal norm of just 20 MWh.

The Climate Change Institute at the University of Maine recorded temperatures in the Northern Hemisphere were 0.44C (32.8F) above the norm on Tuesday, compared with a global average of 0.25C above usual.

A study published earlier this week found that nearly one in three of the world's people were already exposed to potentially deadly heatwaves and predicted that number would rise to nearly half by the end of the century unless governments take steps to aggressively reduce climate-changing emissions.

Promoted
Listen to the latest songs, only on JioSaavn.com
"People are talking about the future when it comes to climate change, but what we found from this paper is that this is already happening ... and this is obviously going to get a lot worse," said Camilo Mora, geography professor at the University of Hawaii at Manoa and lead author of the study published in the Nature Climate Change journal.
© Thomson Reuters 2017

Omicron Has Reached At Least 13 Countries Despite Travel Curbs