In France, around 40,000 homes were still without power by Thursday evening, with some 4,000 technicians called out to reconnect an initial 250,000 households affected. 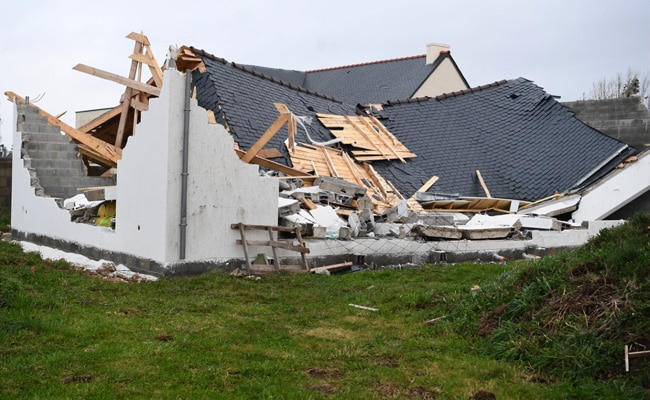 The state weather service has issued an alert for strong winds in most of the country.

Storm "Aurore" swept across parts of northern Europe on Thursday, leaving four dead in Poland and causing substantial damage in Germany, France, the Netherlands and elsewhere.

All four deaths in Poland occurred in the Lower Silesia region.

One person was killed when a van was blown off the road and a builder died when a wall of a house under construction fell over.

In the city of Wroclaw, two died when a tree fell on a passenger car.

The state weather service has issued an alert for strong winds in most of the country.

In the Netherlands meanwhile there were reports of mini-tornadoes injuring four people.

Images from the town of Barendrecht near Rotterdam showed damaged roofs, smashed-up garden sheds and flipped-over trampolines in one street.

"You can see that it has been intense," deputy mayor Nico Bults was quoted as saying by public broadcaster NOS. "That is quite impressive and of course also frightening for the residents."

A campsite in Zelhem near the German border was also struck by a whirlwind with a tree branch hitting a chalet, media reports said.

In France, around 40,000 homes were still without power by Thursday evening, with some 4,000 technicians called out to reconnect an initial 250,000 households affected.

The strong winds also blew other objects onto the rails, including a trampoline, tarpaulins and sheets of corrugated iron ripped from the roofs of houses, rail operator SNCF said.

Aurore swept east over the country overnight, packing winds of up to 175 kilometres (110 miles) per hour and triggering orange weather alerts, the second-highest alert level, in many parts of the country.

France's Transport Minister Jean-Baptiste Djebbari said in a tweet that the Ile-de-France region around Paris as well as Normandy in northern France and the eastern Lorraine region had been the worst affected.

Rail traffic was slowly returning to normal on Thursday.

In the western Brittany region, a number of homes were destroyed by flash floods.

The storm then travelled on to Germany, where it is called "Ignatz" and caused gusts of around 100 km/h.

About 50,000 households in the east of Germany lost power, mainly in the states of Saxony, Saxony-Anhalt and Thuringia.

Rail travel was suspended in those regions, and disrupted in the rest of the country, rail operator Deutsche Bahn reported, calling on passengers to delay any plans to travel.

People were also urged to avoid walking in forests where they were at risk from falling trees and branches.

In the Czech Republic the storm left 270,000 homes without electricity and hit transport links as fallen trees blocked roads and rail lines.

At Prague airport, passengers on some planes had to stay on board longer than expected because the wind prevented them from safely using the disembarkment steps.