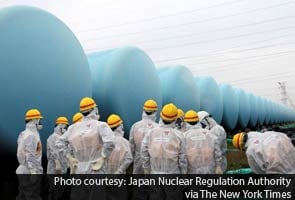 Naraha: In this small farming town in the evacuation zone surrounding the stricken Fukushima Daiichi nuclear power plant, small armies of workers in surgical masks and rubber gloves are busily scraping off radioactive topsoil in a desperate attempt to fulfill the central government's vow one day to allow most of Japan's 83,000 evacuees to return. Yet, every time it rains, more radioactive contamination cascades down the forested hillsides along the rugged coast.

Nearby, thousands of workers and a small fleet of cranes are preparing for one of the latest efforts to avoid a deepening environmental disaster that has China and other neighbors increasingly worried: removing spent fuel rods from the damaged No. 4 reactor building and storing them in a safer place.

The government announced Tuesday that it would spend $500 million on new steps to stabilize the plant, including an even bigger project: the construction of a frozen wall to block a flood of groundwater into the contaminated buildings. The government is taking control of the cleanup from the plant's operator, the Tokyo Electric Power Co.

The triple meltdown at Fukushima in 2011 is already considered the world's worst nuclear accident since Chernobyl in 1986. The new efforts, as risky and technically complex as they are expensive, were developed in response to a series of accidents, miscalculations and delays that have plagued the cleanup effort, making a mockery of the authorities' early vows to "return the site to an empty field" and leading to the release of enormous quantities of contaminated water.

As the environmental damage around the plant and in the ocean nearby continues to accumulate more than two years after the disaster, analysts are beginning to question whether the government and the plant's operator, known as TEPCO, have the expertise and ability to manage such a complex crisis.

In the past, they say, TEPCO has resorted to technological quick fixes that have failed to control the crisis, further damaged Japan's flagging credibility and only deflected hard decisions into the future. Some critics said the government's new proposals offer just more of the same.

"Japan is clearly living in denial," said Kiyoshi Kurokawa, a medical doctor who led Parliament's independent investigation last year into the causes of the nuclear accident. "Water keeps building up inside the plant, and debris keeps piling up outside of it. This is all just one big shell game aimed at pushing off the problems until the future."

Problems at the plant seemed to take a sharp turn for the worse in July with the discovery of leaks of contaminated water into the Pacific Ocean. Two weeks ago, TEPCO announced that 300 tons of water laced with radioactive strontium, a particle that can be absorbed into human bones, had drained from a faulty tank into the sea.

Contaminated water, used to cool fuel in the plant's three damaged reactors to prevent them from overheating, will continue to be produced in huge quantities until the flow of groundwater into the buildings can be stopped - a prospect that is months or even years away. At the same time, delays and setbacks in the enormous effort to clean up the countryside are further undermining confidence in the government's ability to deliver on its promises and eroding the public's faith in nuclear power.

Officials and proponents of the cleanup say difficulties are inevitable given the monumental scale of the problems. But a growing number of critics say the troubles are at least partly a result of fundamental flaws in the current cleanup, and they wondered whether Tuesday's announcement might have been made with an eye to the International Olympic Committee, which will decide shortly on the site of the 2020 Games.

The cleanup efforts to date, critics said, were grandiose but ultimately ill-conceived public works projects begun as a knee-jerk reaction by the government's powerful central ministries to deflect public criticism and to protect the clubby and insular nuclear power industry from oversight by outsiders.

The biggest public criticism has involved the government's decision to leave the cleanup in the hands of TEPCO, which has seemed incapable of getting the plant fully under control. Each step TEPCO has taken seems only to produce new problems. The recent leaking tank was one of hundreds that have been hastily built to hold the 430,000 tons of contaminated water at the plant, and the amount of that water increases at a rate of 400 tons per day. The discovery on Saturday of high radioactivity at other spots near the tanks raised the possibility of still undetected leaks.

Critics complain that the government-run committee that has overseen TEPCO's cleanup is loaded with nuclear industry insiders and overseen by the trade minister, Toshimitsu Motegi, whose ministry is in charge of promoting nuclear power. They say Japan may be able to come up with better, more sustainable plans if it opens the process to outsiders like Japanese nonnuclear companies and foreigners.

As the government takes a more direct hand in the cleanup, Motegi has acknowledged that the old approach is working poorly, if at all. "The response to the contaminated water problem has been left to TEPCO, and has ended up looking like a game of Whac-A-Mole," he told reporters Monday.

Motegi's ministry will now take charge of the plant's cleanup. This will include the plan to stop the influx of groundwater into the reactor buildings by sealing them off behind a milelong subterranean wall of ground frozen by liquid nitrogen.

Some critics have dismissed the "ice wall" as a costly technology that would be vulnerable at the blackout-prone plant because it relies on electricity the way a freezer does, and even more so because it has never been tried on the vast scale that Japan is envisioning and was always considered a temporary measure, while at Fukushima it would have to endure possibly for decades.

But industry experts said the technology had been used frequently to stabilize ground in big construction projects, like the Big Dig highway project in Boston.

Nuclear experts also questioned the government's longer-term plan to extract the fuel cores from the reactors, which if successful would eliminate the major source of contamination. Some doubted whether it was even technically feasible to extricate the fuel because of the extent of the damage during the explosions and subsequent meltdowns.

Even at Three Mile Island, where the reactor vessel remained intact, removing the fuel by remote-controlled machinery was a tricky engineering feat. While great strides have been made in robotics since then, damage to the containment vessels at Fukushima makes the problems there much more complex.

Molten fuel not only piled up like wax from a candle on the vessel floor, as at Three Mile Island, but ran through cracks into the piping and machinery below. Some experts warn that it may even have found its way into the ground beneath the buildings.

Scientists have played down the current threat from contaminated water, saying the new leaks are producing small increases in radioactivity in the Fukushima harbor that remain far lower than immediately after the March 2011 crisis.

"This continued leakage is not the scale of what we had originally," said Ken O. Buesseler, a scientist at the Woods Hole Oceanographic Institution on Cape Cod who has long studied the disaster. "But it's persistent."

Perhaps the principal threat of the radioactive water is to the Japanese government, which after all the missteps cannot afford to look feckless before a citizenry that is already distrustful of its pronouncements and dubious about nuclear energy.

In view of that, some experts dismiss the current cleanup plans as just a way of defending the status quo by convincing the public that the damage can be undone, and that more drastic steps, like paying more compensation to displaced residents or permanently shutting the nation's other nuclear power plants, are unnecessary.

"This is just a tactic to avoid taking responsibility," said Harutoshi Funabashi, a sociologist at Hosei University who led a critical examination of the recovery efforts by the Science Council of Japan, a group of about 2,000 academics. "Admitting that no one can live near the plant for a generation would open the way for all sorts of probing questions and doubts."

Funabashi and other critics say Japan should consider other options, including the tactic adopted by the former Soviet Union at Chernobyl of essentially capping the shattered reactors in concrete and declaring the most contaminated towns off limits for a generation.

Japanese officials said that the large amounts of groundwater under the plant mean that just covering the reactors with concrete would fail to contain the spread of radiation. They also said giving up on a large portion of Fukushima was not an option in a densely populated country where land remains a scarce commodity.

But they also suggested that the reason for eschewing a Soviet-style option may be the fear that failure could turn a wary public even more decisively against Japan's nuclear industry.

"If we just buried the reactors, no one would want to see the face of another nuclear power plant for years," said Shunsuke Kondo, chairman of the Atomic Energy Commission, an advisory body in the Cabinet Office.

Unease about the worsening situation is evident among the residents of evacuated communities like Naraha. The cleanup here has gone more quickly than in other evacuated towns, with most decontamination expected to be finished sometime next year. Even so, town officials said that when they asked Naraha's 7,600 residents whether they would move back, most said they would refuse as long as the plant remained in its unstable state.

Promoted
Listen to the latest songs, only on JioSaavn.com
"Every three days, there seems to be a new problem up there," said Yukiei Matsumoto, the mayor of Naraha, whose town hall is now housed in a conference center at a university just outside the 12-mile-radius evacuation zone. "The longer this continues, the more distant the townspeople feel from TEPCO and the national government."