The property market is reported to have at least 9,000 empty new flats, including some completed five years ago. 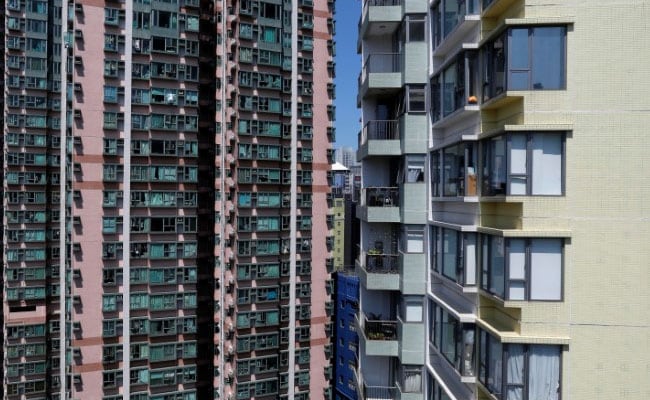 Paradoxically, Hong Kong also has one of the highest property prices in the world. (Reuters)

Hong Kong proposed a vacancy tax on empty new homes on Friday in an attempt to discourage developers from hoarding, but analysts expect the measure to have little impact on prices in a property market rated the world's least affordable.

The tax, at 200 percent of a newly built unit's rateable value, which is the estimated annual rental value of a property, is among a series of property cooling measures announced by the city's chief executive, Carrie Lam.

The tax translates to about 5 percent of a flat's value, the government said, adding it would need the Legislative Council's approval and it would not be applicable to resold flats.

Private home prices in Hong Kong have been on a record-breaking run for 19 consecutive months, fuelling discontent among residents.

Under the proposed measure, developers would have to report the status of their new flats to the government annually, and the additional tax would be imposed on flats that had not been rented out for six of the previous 12 months.

Lam said the property market had at least 9,000 empty new flats, including some completed five years ago.

"Today, when the housing supply is so tight and the demands for ownership are so strong, it is hard to understand why so many flats are left empty," she said.

A skilled service worker would need to work for 20 years to buy a 650 square feet (60 square metre) flat near the city centre, UBS said in a report in September.

Apart from the tax, the government also said nine plots of land previously allocated for private homes, including three in the prime Kai Tak district, would be used for public housing.

Subsidised homes would be priced according to people's median income instead of the market price, Lam said.

It is common for developers in Hong Kong to sell newly completed residential projects in phases, in the hope of fetching a higher price on later sales.

Ahead of the government announcement, developers pushed out about 240 new units for sale last weekend, including some that were completed several years ago, according to media.

Of the roughly 1.17 million new and old private flats in Hong Kong, 3.7 percent are vacant, which is among the lowest rates since the former British colony returned to Chinese rule in 1997.

An association representing developers opposed the vacancy tax and said the figure of 9,000 empty new flats that Lam cited was misleading as it included 6,000 units that required at least six months of work for things such as furnishing, fittings and landscaping.

"Any suggestion of 'hoarding' can hardly be justified," the Real Estate Developers Association of Hong Kong said in a statement this month.

In response to a question on whether luxury apartments that developers fail to sell should also be taxed, Lam suggested developers who did not wish to pay the new tax could lease the flats to senior expatriate employees at a lower rate.

Lam also said the government would modify a Pre-sale Consent Scheme so that developers would have to push out at least 20 percent of their flats during pre-sales.

"In recent years we see flats are sold in the way toothpaste is squeezed out of the tube," Lam said.

"This will be unacceptable in the future."

A vacancy tax could be a double-edged sword for the housing market, according to property consultancy JLL.

"Developers may consider funnelling the additional costs to buyers to offset the vacancy tax, leveraging on the strong levels of demand in the market," Ingrid Cheh, associate director of research department at JLL, said earlier this week.

Hong Kong's property sub-index closed up 1.92 percent ahead of the announcement.