Centrist French presidential candidate Emmanuel Macron extended his lead in the polls over his far-right rival Marine Le Pen on Friday, the final day of a tumultuous election campaign that has turned the country's politics upside down. 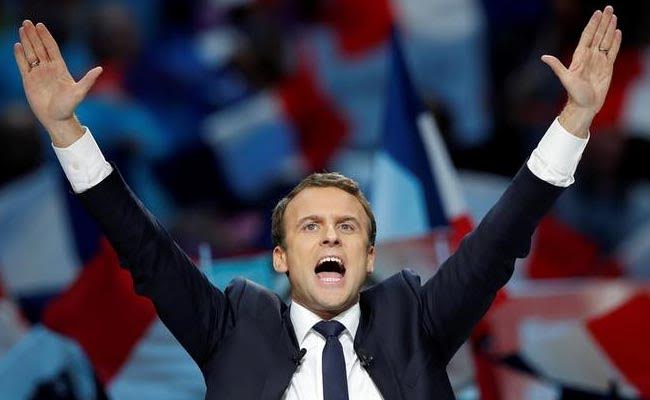 The election is seen as the most important in France for decades.

PARIS: Centrist French presidential candidate Emmanuel Macron extended his lead in the polls over his far-right rival Marine Le Pen on Friday, the final day of a tumultuous election campaign that has turned the country's politics upside down.

The election is seen as the most important in France for decades with two diametrically opposed views of Europe and France's place in the world at stake.

The National Front's Le Pen would close borders and quit the euro currency, while independent Macron, who has never held elected office, wants closer European cooperation and an open economy. The candidates of France's two mainstream parties were both eliminated in the first round on April 23.

According to an Elabe poll for BFM TV and L'Express, Macron will get 62 percent of the votes in the second round compared to 38 percent for Le Pen, an increase of three points for the centrist candidate compared to his projected score in the last Elabe poll.

The showing is Macron's best in a voting survey by a major polling organisation since nine other candidates were eliminated in the first round on April 23.

The survey was carried out after a rancorous final televised debate between the two contenders on Wednesday, which Macron was seen by French viewers as having won, according to two polls.

Macron's strong showing in the debate and another poll this week that showed his En Marche! (Onwards!) political movement was likely to emerge as the biggest party in the June legislative elections as well have lifted the mood among investors who had worried about the upheaval a Le Pen victory could cause.

On Thursday, the premium investors demand to hold French bonds over German ones reached its narrowest point in six months, reflecting perceptions that Le Pen had missed her last chance to unseat Macron.

The anti-immigration, anti-EU Le Pen was not giving up.

"My goal is to win this presidential election," she said on RTL radio.

"The choices of Mr. Macron are choices which would lead to the end of our country as we know it, the end by being submerged by migration, which he will not oppose given his submission to the policy of Mrs (German Chancellor Angela) Merkel, the choice of the social devastation of deregulation, of ultra-flexibility which will mean war by everybody against everybody else."

A separate poll on Friday by Odoxa said a quarter of the French electorate was likely to abstain in Sunday's vote, many of them left-wing voters disappointed after their candidates missed reaching the runoff.

The projected abstention rate would be the second-highest for a presidential election runoff since 1965, underscoring the disillusionment of many voters at the choice they now face.

The turnout for the first round of the election was close to 78 percent, according to the interior ministry.

The poll for Franceinfo radio showed 69 percent of abstaining voters will do so reluctantly, refusing to choose between Macron and Le Pen. Many voted for the more leftist candidates eliminated in the first round.
© Thomson Reuters 2017

(Except for the headline, this story has not been edited by NDTV staff and is published from a syndicated feed.)
Comments
Emmanuel MacronMarine Le PenFrench election