Egypt presidential election set for May 26, 27 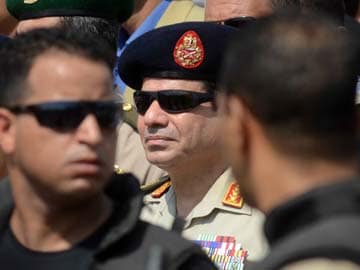 Cairo: Egypt's electoral commission said on Sunday the presidential election will take place on May 26 and 27, 10 months after the army overthrew Islamist leader Mohamed Morsi.

The man who toppled him, now retired army chief Abdel Fattah al-Sisi, is expected to win the vote easily as he rides a wave of popularity for removing the divisive president in July.

The election would go into a second round if there is no clear winner, but that outcome seems unlikely given Sisi's popularity and the absence of serious contenders.

The only other main candidate is leftwing politician Hamdeen Sabbahi, who came third in the 2012 election that Morsi won.

The announcement by electoral chief Ashraf al-Asy at a news conference came days after Sisi resigned as defence minister and army commander to contest the election, pledging to eradicate "terrorism".

Egypt has been rocked by often violent protests and a spate of militant attacks that have killed 496 people, mostly policemen and soldiers, the government says.

Morsi's Muslim Brotherhood has said there could be no stability under Sisi as president, accusing him of staging a coup against the country's first freely elected and civilian president.

Promoted
Listen to the latest songs, only on JioSaavn.com
The Islamists have vowed to continue protests, which along with persistent militancy threatens to further damage the already battered economy.

According to a road map drawn up by the military installed government, the presidential election will be followed by a parliamentary poll to restore elected rule by the end of the year.