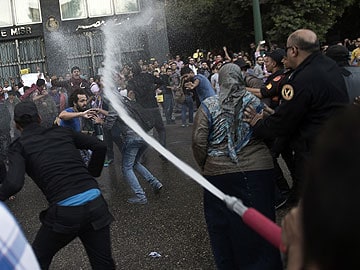 Cairo: Egypt's new constitution is still in the drafting stage but has already disappointed rights groups and activists who had hoped it would curb the military's wide-ranging powers and privileges.

They have particularly objected to a provision which would allow military trials for civilians accused of "harming" the armed forces, which they fear could be interpreted expansively to target protesters, journalists and dissidents.

The passing of the revised constitution through a referendum is the first milestone of a road map to elected rule offered by Egypt's military-installed authorities, who took office after the ouster of Islamist president Mohamed Morsi on July 3.

The army toppled Morsi after millions of Egyptians called for his resignation, citing among their chief grievances a 2012 constitutional decree that gave Egypt's first democratically elected leader extraordinary powers, which he later rescinded.

Under Morsi, a new constitution was hastily drafted by a 100-member panel dominated by Islamists and boycotted by liberals, and was approved in a December 2012 popular referendum by a more than 60 percent margin.

The military-installed authorities quickly suspended the constitution after his overthrow and appointed a 50-member panel to draft a new one.

The panel includes just two Islamists and no one from Morsi's Muslim Brotherhood movement, which has been the target of a sweeping crackdown in recent months that has seen hundreds of protesters killed by security forces.

"Where has the revolution gone? It has not (been) transferred into the document," Joerg Fedtke, professor at Tulane University Law School in the US city of New Orleans, said.

"The paradigm has not changed since 1971" -- the year when Egypt adopted an earlier constitution which undergirded decades of autocratic rule by President Anwar Sadat and his successor Hosni Mubarak, who was toppled by a popular uprising in February 2011.

The revised text keeps the military's budget beyond any civilian scrutiny and also stipulates that members of the military be tried only in military courts, even in cases not related to their service, according to Heba Morayef, the Human Rights Watch representative in Egypt.

"The revised constitution also says that members of general intelligence services should also be tried by military" tribunals, said Morayef, calling it "an extension of the immunity" given to law enforcement agencies in a country with a long history of torture and police brutality.

The end of such proceedings is the most divisive issue among members of the 50-member constitutional panel.

On Tuesday, 10 of its members halted work to protest the arrest of demonstrators, including prominent activists, who rallied against this article, forcing the committee to suspend its work until the next morning.

The panel only includes two representatives from the security forces, but the committee has heard from members of the armed forces who strongly advocated retaining provisions favouring the military.

Egypt's military, and particularly its top general Abdel Fattah al-Sisi, has seen its popularity soar in the wake of Morsi's ouster, and the crackdown on Islamists has been allowed to proceed in part because of a spike in nationalist sentiment.

Islamists have meanwhile been driven underground after the arrest of some 2,000 Morsi supporters, including nearly the entire leadership of the Brotherhood, Egypt's best-organised political movement.

On Sunday, dozens of filmmakers slammed their representative on the constitutional panel, a noted movie director, for not objecting to the clause allowing military tribunals for civilians, which was adopted in the first reading of the document.

Another intense debate inside the committee revolves around the place of religion in the constitution, with Muslim and Christian representatives regularly threatening to quit the panel.

The revised text does not include section 219 of Morsi's constitution, which bolstered conservative interpretations of Islam, although the new document retains Islamic sharia law as the primary source of legislation, as did the Mubarak-era constitution.

Alexis Blouet, a French researcher who is studying the draft of the new constitution, said removing articles that bolstered conservative interpretations of Islam is only "symbolic, with no legal consequences".

Promoted
Listen to the latest songs, only on JioSaavn.com
Once approved by the panel, the revised text will be submitted to a public referendum expected in the second half of January.