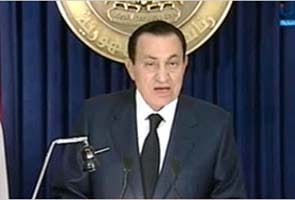 Cairo: President Hosni Mubarak declared Tuesday night that he would step down in September as modern Egypt's longest-serving leader, but that did not go far enough for the hundreds of thousands who poured into Tahrir Square in a sprawling protest that cut across entrenched lines of piety, class and ideology.

Hours later, President Obama strongly suggested that Mr. Mubarak's concession was not enough, declaring that an "orderly transition" in Egypt "must begin now." In a 30-minute phone call to Mr. Mubarak just before his public remarks, Mr. Obama was more forceful in insisting on a rapid transition, according to officials familiar with the discussion.

The announcement in a 10-minute speech by Mr. Mubarak came after his support from the powerful Egyptian military began to crumble and after American officials urged him not to run again.

Mr. Mubarak's offer, which fell short of the crowd's demands for the president to step down now and even face trial, could well inflame passions in an uprising that has rivaled some of the most epic moments in Egypt's contemporary history. The protests have captivated a broader Arab world that has already seen a leader fall in Tunisia this month and growing protests against other American-backed governments.

Mr. Mubarak, 82, said he would remain in office until a presidential election in September and, in emotional terms, declared that he would never leave Egypt.

"The Hosni Mubarak who speaks to you today is proud of his achievements over the years in serving Egypt and its people," he said, wearing a dark suit and seeming vigorous in the speech broadcast on state television. "This is my country. This is where I lived, I fought and defended its land, sovereignty and interests, and I will die on its soil."

In Tahrir Square, crowds waved flags as the speech was televised on a screen in the square. "Leave!" they chanted, in what has become a refrain of the demonstrations.

"There is nothing now the president can do except step down and let go of power," said Mohammed el-Beltagui, a leader of the Muslim Brotherhood, Egypt's most powerful opposition group, which has entered forcefully into the fray with Mr. Mubarak. Those sentiments were echoed by other voices of the opposition, including Mohamed ElBaradei, a Nobel laureate, and Ayman Nour, a longtime dissident.

The speech and the demonstration, whose sheer numbers represented scenes rarely witnessed in the Arab world, illustrated the deep, perhaps unbridgeable, divide that exists between ruler and ruled in Egypt, the most populous Arab country and once the axis on which the Arab world revolved.

The events here have reverberated across a region captivated by an uprising that, in some ways, has brought a new prestige to Egypt in an Arab world it once dominated culturally and politically. King Abdullah II of Jordan fired his cabinet after protests there on Tuesday, and the Palestinian cabinet in the West Bank said it would hold long-promised municipal elections "as soon as possible." Organizers in Yemen and Syria, countries with their own authoritarian rulers, have called for protests this week.

In his speech, Mr. Mubarak was pugnacious, accusing protesters of sowing chaos and political forces here of adding "fuel to the fire." He fell back to the refrain that has underlined his three decades in power -- security and stability -- and vowed that he would spend his remaining months restoring the country to calm.

"The events of the past few days impose on us, both citizens and leadership, the choice between chaos and stability," he said. "I am now absolutely determined to finish my work for the nation in a way that ensures its safekeeping."

American officials were clearly disappointed by Mr. Mubarak's effort to stay in office for the next eight months, but Mr. Obama, saying, "It is not the role of any other country to determine Egypt's leaders," stopped short of demanding that Mr. Mubarak leave office immediately.

But if Mr. Obama pushed Mr. Mubarak, he did not shove him, at least in his public remarks. He commended the Egyptian military for its "professionalism and patriotism" in refusing to use force against the protesters, comments that clearly undercut Mr. Mubarak's efforts to maintain control. He praised the protesters for their peaceful action, and he reinforced that "the status quo is not sustainable."

Mr. Obama was clearly hopeful that Mr. Mubarak would decide to leave office sooner. But he warned there would be "difficult days ahead," a clear signal that he expected the transition period to be lengthy, and messy.

The uprising, though, seems to have brought a new dynamic to political life here, on display in the scenes of jubilation and protest in Tahrir Square. The government suffered what could prove a fatal blow to its credibility as police authority collapsed Saturday and Mr. Mubarak's officials met the early protests with half-hearted measures. On Monday, the army said it would not fire on protesters, calling their demands legitimate and leaving Mr. Mubarak with few options.

Protesters defied a curfew that has become a joke to residents and overcame attempts by the government to keep them at bay by suspending train service, closing roads and shutting down public transportation to Cairo. Peasants from the south joined Islamists from the Nile Delta, businessmen from wealthy suburbs rubbed shoulders with street-smart youths from gritty Boulaq in a square that served as a vast tapestry of diversity joined in the bluntest of calls: Mr. Mubarak leave immediately.

"Welcome to a free Egypt," went one cry.

"No one would have imagined a week before that this would happen in Egypt," said Basel Ramsis, a 37-year-old director who returned from Spain for the uprising. "I had to be here. We all have to be here. The Egyptian people can change Egypt now."

As the uprising has spread, thousands of foreigners have sought to flee the country in chaotic scenes at the Cairo airport. The United States ordered all nonemergency embassy staff members and other American government personnel to leave the country, fearing unrest as the protests build toward Friday, when organizers hope for even bigger crowds in what they portray as a last push.

But most of Cairo slumbered, its streets free of chronic traffic jams and its shops shuttered out of anxiety or respect for a strike called to coincide with the protest. Crowds walked miles to the rendezvous. Others woke up in the square's muddy patches, where they have slept for days. Ayman Ahmed ventured alone, carrying a cardboard placard with the lyrics of a song by Abdel-Halim Hafez, an Egyptian icon.

"And we won when the army rose and revolted," it went, a song he knew by heart, "when we ignited a revolution and fire, when we fought corruption, when we liberated the country, when we realized independence, and we won, we won, we won."

He passed slogans scrawled on bridges, lampposts and the statues of lions before the Kasr al-Nil Bridge. "Mubarak is a thief," one read. "Mubarak is a coward."

But, perhaps most poignantly, one declared, "Egypt is mine."

In the long years of Mr. Mubarak's rule, Egypt was spared the brutality of Saddam Hussein's Iraq and the delusions of the Baath Party in Syria. But his brand of despotism produced an authoritarianism that suffocated his people, a bureaucracy that corrupted the most mundane transaction and a malaise that saw Egypt turn inward.

"I've always said that my age is 60, but I haven't lived for 30 years," said Leila Abu Nasr, walking with her husband, Sharif. "We could have done so much more."

Tens of thousands of people also took to the streets of Alexandria, Egypt's second-largest city, and other protests gathered along in the Nile Delta, the south and along the Suez Canal.

In an ominous sign that the unrest had not ended, about 250 pro-Mubarak demonstrators attacked the crowd of several thousand in Alexandria with knives and sticks, witnesses said. A dozen people were injured in the melee that followed, medical officials on the scene said. The army fired warning shots to separate the groups.

The very desire for sweeping change on the part of the protesters may present the greatest challenge in the transition period Mr. Mubarak declared Tuesday night. Mr. Mubarak promised changes, but the Parliament responsible for them is completely dominated by his party.

The opposition may similarly be at a disadvantage. Organized by young people and driven by the poor and dispossessed in the country of 80 million, the uprising has stunned even the most critical of his government. The Muslim Brotherhood has so far stayed in the background, and other opposition leaders, like Mr. ElBaradei and Mr. Nour, have struggled to cultivate support.

Several activists said Mr. Mubarak's gesture might have been enough had it been made a week ago. But each day in the square, new cries have rung out -- a new constitution, the removal of the ruling party and a trial of Mr. Mubarak and his cronies.

"It's not just about President Mubarak," said Mustafa Mohammed, 32, a day laborer. "Of course, he has to go. But the whole regime has to go with him."

The accumulated miseries of all his years in power seemed to underline the anger on Tuesday. Naser Muftah, a factory worker, said he had to go by the name Nader because bureaucrats fouled up his identity card, and he could not change it. Walid Kamel, a lawyer, said his clients were treated like dogs anytime they entered a police station.

Each seemed to bathe in the sense of empowerment represented by the square, where young people organized security committees. From those kneeling in the mud for noon prayers and the couples walking by, with no fear of harassment, the message was the same: They would prove to the government that they were better than it had so long portrayed them.

"You see all these people, with no stealing, no girls being bothered, and no violence," said Omar Saleh, who sat with his friends. "He's trying to tell us that without me, without the regime, you will fall into anarchy, but we have all told him, 'No.' "

Promoted
Listen to the latest songs, only on JioSaavn.com
(Reporting was contributed by David D. Kirkpatrick, Kareem Fahim and Liam Stack from Cairo; Nicholas Kulish from Alexandria, Egypt; and David E. Sanger from Washington.)

Covid-19 Or The Flu? Amid "Twindemic", What Doctors Say About Symptoms