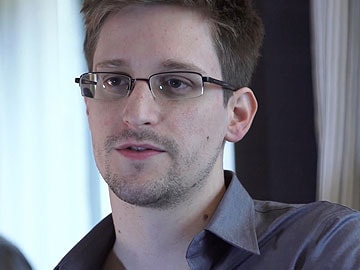 In an interview with The Guardian newspaper, to whom the former National Security Agency contractor revealed the existence of mass surveillance programmes a year ago, Snowden said the planned laws were "beyond belief".

The British parliament is this week due to debate new legislation allowing Internet providers and mobile phone companies to keep details of communications between people in case they are needed in investigations.

In April the European Court of Justice threw out an EU law that forced companies to retain data for at least six months, saying it breached the right to privacy.

Prime Minister David Cameron has argued that it is necessary to bring in an emergency law to allow continued retention of data to protect national security.

But Snowden countered: "Is it really going to be so costly for us to take a few days to debate where the line should be drawn about the authority and what really serves the public interest?"

In an interview in Moscow, he told Snowden told The Guardian, "If these surveillance authorities are so interested, so invasive that the courts are actually saying they violate fundamental rights, do we really want to authorise them on a new, increased and more intrusive scale without any public debate?"

Snowden said it was unusual for a government to pass emergency laws during peace time when there are no bombs falling or "U-boats in the harbour".

Cameron has said that current surveillance powers would not be extended, but civil liberties campaigners have said the legislation is intrusive and could infringe privacy rights.

Promoted
Listen to the latest songs, only on JioSaavn.com
Snowden fled to Russia after he leaked details of secret state surveillance programmes, and Moscow is likely to extend his temporary asylum permit when it runs out at the end of July, according to the newspaper.