Portrait Made Entirely Using AI Algorithm Sells For More Than $400,000

Edmond de Belamy is the brainchild of French collective Obvious, whose aim is to use artificial intelligence to democratize art. To make the painting, artist Pierre Fautrel ran 15,000 classic portraits through a computer software. A portrait made by algorithm smashed new boundaries Thursday, selling for $432,500 and becoming the first piece of Artificial Intelligence art sold at a major auction house, Christie's said.

At first glance, "Edmond de Belamy," the portrait of a gentleman dressed in black and framed in gold, could be any standard portrait from the 18th or 19th century.

Up close, the image is more intriguing. The face is fuzzy and the picture seemingly unfinished. Instead of an artist's signature, it bears the stamp of a mathematical formula on the bottom right.

It's the brainchild of French collective Obvious, whose aim is to use artificial intelligence to democratize art. To make the painting, artist Pierre Fautrel ran 15,000 classic portraits through a computer software. 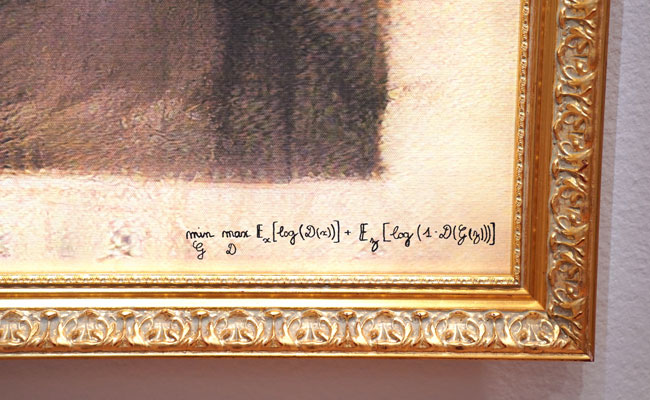 Instead of an artist's signature, 'Edmond de Belamy' bears the stamp of a mathematical formula on the bottom right (AFP)

Once the software "understood the rules of portraiture," using a new algorithm developed by Google researcher Ian Goodfellow, it then generated a series of new images by itself, Fautrel said.

The French collective selected 11, calling them the "Belamy family," one of which on Thursday fetched $432,500 at Christie's in New York, the epicenter of the traditional art market.

The price smashed its pre-sale estimates of $7,000 to $10,000. Christie's said the work was snapped up by an anonymous telephone bidder after a five-way battle on the phone, online and one would-be buyer in the room.

"Even if the algorithm creates the image," he told AFP "we are the people who decided to do this, who decided to print it on canvas, sign it as a mathematical formula, put it in a gold frame."

He compared AI art to early photography of the 1850s, which he says critics rubbished at the time as "not being art and which would destroy artists."

Richard Lloyd, international head of prints and multiples at Christie's, persuaded the collective to put the print up for sale in order to foster a debate about artificial intelligence in art.

"I know it's a debate that's going on quite widely, I thought that in a way this marked a watershed -- or slightly a tipping point," he told AFP.

Leaving aside the art debate, there are legal questions. Is the collective or the algorithm the artist? What are the copyright issues?

For Lloyd, this is just the beginning of AI art.

"This is developing incredibly fast. Only in five or 10 years we will look back on this and it will look very different," he told AFP.

"Artists who are great adopters of technology, they will seize AI," he predicted. "Artists will use it to generate images which they will then modify ... It will be quite seamless."

There is also a benefit to the client.

"It gives you privilege that only very wealthy people in previous centuries had -- to commission works of art painted just for you," Lloyd said.

(Except for the headline, this story has not been edited by NDTV staff and is published from a syndicated feed.)
Comments
Edmond de BelamyObvious CollectiveArtificial Intelligence AI