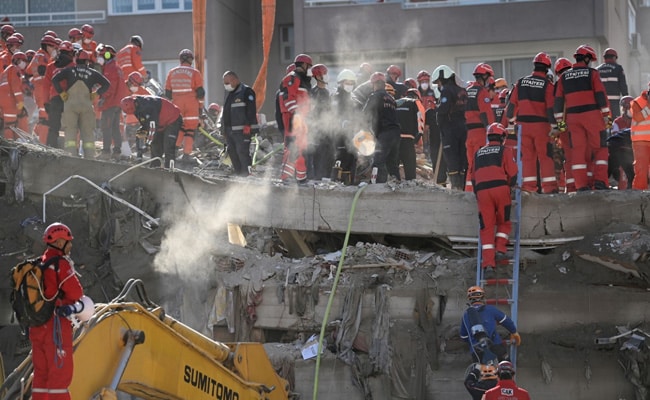 Turkey Earthquake: Search and rescue teams look for victims in the rubble of a collapsed building

Rescue workers were searching eight wrecked buildings in Izmir Sunday despite dwindling hope for survivors as the death count from a powerful magnitude earthquake which hit western Turkey rose to 51.

The 7.0-magnitude quake has also injured 896 in Turkey, the Turkish emergency authority AFAD said, after striking on Friday afternoon near the west coast town of Seferihisar in Izmir province.

More than 200 people were in hospital, AFAD said.

Vice President Fuat Oktay said later Sunday the death count had risen by two to 51 during a visit to Izmir, adding that nearly 300 buildings were damaged although most were only lightly affected.

Overnight, 33 hours after the quake, a 70-year-old man was pulled out from underneath the rubble to the applause of onlookers and taken to hospital.

The worst affected Turkish town was Bayrakli, where anxious families in thick blankets spent a second night in tents.

Others watched nervously as rescue workers went through the debris for a second day.

Some privately expressed concern that hopes of finding more survivors were fading as the hours pass by.

But a worker at the site of one collapsed building, who did not wish to be named, told AFP they believed at least 10 people could still be under the rubble.

Nearly 6,000 rescuers have been working all day and all night since Friday, mechanical diggers helping them remove blocks of concrete.

Periodically, the rescue work has been halted and everyone kept silent to listen for any sign of someone trapped in the rubble.

"It will be a miracle if they are found alive," a woman waiting to hear news of a family friend was overheard telling another.

Thousands of tents have been set in the since officials warned residents to avoid returning to their homes.

Hurriyet daily, citing local district reports, said two of the buildings where rescue efforts are concentrated were in poor shape in 2012 and 2018 respectively, with "low quality concrete" used to build them.

The newspaper said the "damning" report on one building clearly assessed it was "at risk" based on earthquake safety requirements and advised that "necessary measures" be taken to increase safety.

The second building had apparently had work undertaken to strengthen the structure, the daily added.

Turkey has reported more than 800 aftershocks following the quake, including 40 that were above four in magnitude.

Two teenagers on their way home from school were also killed in Greece, as the quake caused a mini-tsunami on the Greek island of Samos and a rush of water from the sea that turned streets into rivers in one Turkish town.

Friday's earthquake was so powerful it was felt as far away as Istanbul and Athens. The disaster has prompted Greece and Turkey to put aside their differences and work together to help those affected.

The quake is Turkey's deadliest so far this year, Turkish website HaberTurk noted. One in January killed more than 40 people in the eastern provinces of Elazig and Malatya.

Turkey has been the scene of repeated earthquakes that have caused massive destruction, including the huge earthquake measuring more than 7.0 magnitude centred on the western city of Izmit in 1999 which killed 17,000 people, including around 1,000 in Istanbul.

There have been fears over future disasters and how prepared Turkey is, although since 1999 Ankara has applied tougher rules on building safety and insurance.