"Some of my British friends have asked me whether Brexit could be reversed, and whether I could imagine an outcome where the UK stays part of the European Union," Donald Tusk told reporters. 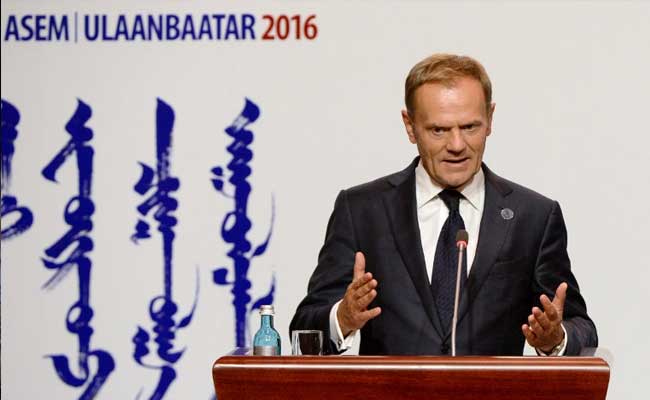 Brussels, Belgium: European Union President Donald Tusk echoed rocker John Lennon's "Imagine" Thursday as he said he hoped Britain might still stay in the bloc.Speaking ahead of an EU summit in Brussels where Prime Minister Theresa May was due to brief leaders on her Brexit plans, Tusk suggested the process could still be reversed.

"Some of my British friends have asked me whether Brexit could be reversed, and whether I could imagine an outcome where the UK stays part of the European Union," Tusk told reporters.

"I told them that in fact the European Union was built on dreams that seemed impossible to achieve, so who knows?" the former Polish premier added.

Tusk's last line was a quote from "Imagine", the iconic 1971 ode to world peace by late former Beatle Lennon.

But Belgian Prime Minister Charles Michel -- who has strongly argued for EU unity on Brexit -- argued that Tusk should let it be.

"It's time for action and certainty. Not for dreams and uncertainty #Brexit #Future of Europe," Michel tweeted.

Calling Brexit "a pity", Lithuania's outspoken President Dalia Grybauskaite said: "We need to think about the future and the sooner we settle the future the better for all of us."

Britain stunned the EU when it voted to end its four-decade membership of the 28-nation bloc in a referendum a year ago on Friday.

But May's disastrous showing in elections on June 8 in which she lost her majority has sparked speculation that her Brexit plans may be watered down, or even reversed.

French President Emmanuel Macron and German Finance Minister Wolfgang Schaeuble both said last week that the "door was open" for Britain to remain in the EU.

At the summit May is due to unveil a "generous offer" to resolve EU concerns about the rights of three million European expats living in Britain after Brexit.

Tusk meanwhile insisted the remaining 27 members had a renewed sense of optimism about the bloc's future after years of crisis and mounting anti-EU sentiment culminating in the Brexit vote.

Despite it being his 80th summit as premier or EU head, "never before have I had such a strong belief that things are going in a better direction," he said.

Promoted
Listen to the latest songs, only on JioSaavn.com
"Our optimism should still be extremely cautious but we have good reason to talk about it."