Donald Tusk's draft plans rebuffed many of the demands that PM Theresa May made on the post-Brexit relationship between Britain and EU after 2019. 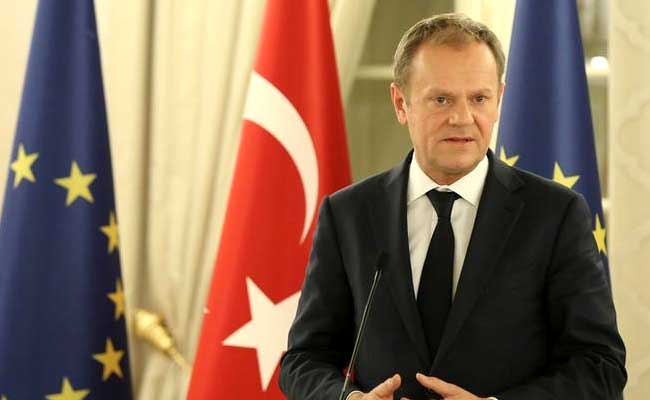 Luxembourg: EU President Donald Tusk said Wednesday the bloc does not want to "build a wall" with Britain as it leaves the bloc but warned in new guidelines for trade talks of a negative economic impact.

Tusk's draft plans rebuffed many of the demands that Prime Minister Theresa May made in a long-awaited speech on the post-Brexit relationship between Britain and the EU after 2019.

The former Polish premier said he wanted a standard free-trade deal with Britain after 2019, insisting that Britain could not "pick and mix" the benefits of EU membership.

"My proposal shows that we don't want to build a wall between the EU and Britain. On the contrary, the UK will be our closest neighbour and we want to remain friends and partners," Tusk told a press conference in Luxembourg.

Tusk, who met May last week, said the EU would aim for an agreement "covering all sectors and with zero tariffs on goods", but said it must include access for EU fishing boats to British waters -- a highly sensitive issue for hardline Brexit supporters.

And on services -- vital to Britain's crucial financial sector -- Tusk simply indicated the deal should "address" the issue.

But he said the red lines laid down by London -- that Britain must leave the EU's single market and customs union, and no longer submit to rulings by the European Court of Justice -- meant a free-trade deal was the only option.

"Because of Brexit we will be drifting apart. In fact, this will be the first FTA in history that loosens economic ties, instead of strengthening them," the former Polish premier added.

Luxembourg Prime Minister Xavier Bettel insisted there could be "no cherry-picking" by Britain, adding that "Brexit is a damage limitation exercise".

Tusk's guidelines, which are expected to be adopted by leaders of the remaining 27 member states at a summit on March 22, said that Britain's own red lines "will inevitably lead to frictions."

"This will unfortunately have negative economic consequences," they said, adding however that the EU would be ready to "reconsider" its offer if Britain's positions were to "evolve."

May's spokesman said Britain hoped the final guidelines "will provide the flexibility to allow the EU to think creatively and imaginatively about our future economic partnership."

May used her speech last week to call for an EU-UK deal that worked "more fully than any free-trade agreement anywhere in the world today", while acknowledging it was time to face "hard facts" about the economic consequences of Britain's shock 2016 vote to leave.

Her finance minister Philip Hammond was to tell the EU in a speech later Wednesday that including financial services in any trade deal was in the "mutual interest" of both Britain and the union.

In his keynote speech, Hammond will "address the sceptics who say a trade deal including financial services cannot be done", according to excerpts of the address released by his office on Tuesday.

"Every trade deal the EU has ever done has been unique," he is expected to say, pointing to prior agreements with Turkey, Canada and South Korea.

A leaked EU report quoted by the Guardian newspaper dismissed similar demands laid out by May in her speech last Friday as "double-cherry picking", and more about managing her restive Conservative party than proper negotiating.

The EU's tough stance is partly inspired by fears that if Britain gets a bespoke deal it could inspire the 27 remaining member states to leave the EU and demand special treatment themselves.

The European Parliament -- which will have the final veto on any Brexit deal -- is set to publish its own demands for trade talks later on Wednesday in Brussels.

A political declaration on future relations will be attached to the Brexit divorce agreement between Britain and the EU, which Barnier wants in place by November at the latest.

Promoted
Listen to the latest songs, only on JioSaavn.com
Any actual trade deal will have to wait until after Brexit day on March 29, 2019.

(Except for the headline, this story has not been edited by NDTV staff and is published from a syndicated feed.)
Comments
Donald TuskEuropean UnionBrexit