Ahead of the November 3 presidential elections, the Trump campaign has intensified its outreach towards the Indian-American community. 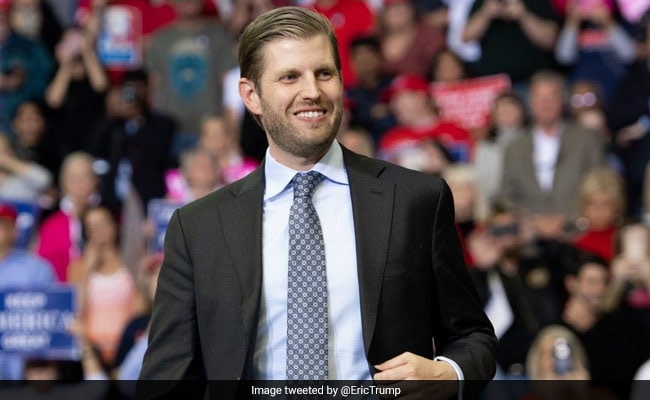 My father will never let you down, Eric Trump told a gathering of Indian-Americans (File)

Indian-Americans represent the "best of America" and President Donald Trump will never ever let them down, his son Eric has said, underlining that the entire Trump family loves the "amazing" community.

Ahead of the November 3 presidential elections, the Trump campaign has intensified its outreach towards the Indian-American community, particularly in the battleground states like Florida, Pennsylvania, Michigan, Georgia, North Carolina, Virginia and Texas.

At the formal launch event of "Indian Voices for Trump", Eric referred to his father's policy on China and Pakistan, which he said "is very different from his predecessors."

"My father has always been there for your great country and I promise you, he will always be there for Indian Americans," said Eric, who has been campaigning aggressively on behalf of his father across the country.

In his welcome address, Indian Voices for Trump board member Ritesh Desai thanked President Trump and his family for supporting Indian-Americans and strengthening India-US ties.

Eric said that Indian-American community stands for everything that the Trump family stands for.

"We have so many friends in the community. What your community stands for, I think everything that our family stands for: family, hard work, faith, love of America, love of country," he said and described Indian Americans as an "amazing amazing" community.

Referring to the bunch of buildings that his family business has in India, Eric said, "India is a spectacular country with incredible people."

Early this week, a survey by Indiaspora and Asian Americans & Pacific Islanders (AAPI) Data showed that Trump has made inroads into the Indian-American vote bank, the biggest ever by a Republican president, which has sent worrying signals to the Democrats that the support of this influential ethnic community can no longer be taken for granted.

It showed that a majority of Indian-Americans still favour former vice president Joe Biden, the Democratic Party's nominee in the November 3 US presidential election.

It found that 74-year-old Trump, seeking re-election, is making a big dent into the Indian-American vote bank despite the fact that Biden has a strong relationship with the community and played a key role in bilateral ties over the past few decades. Biden, 77, also scripted history last month by selecting Senator Kamala Harris, 55, as his running mate.