"Are You Talking To Me?" On Camera, Trump's Heated Exchange With Reporter

The president accused the whistleblower whose complaint alleges presidential abuse of power of being "fake" and "vicious" and into "some bad things. 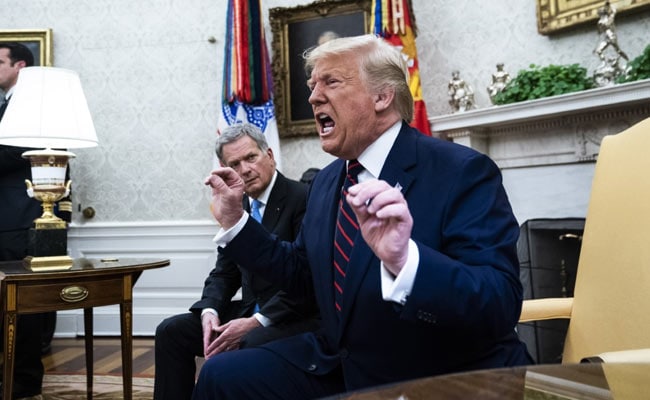 It ended with Trump excoriating the press as "corrupt people" who undermine U.S. democracy.

"Look at all the press that you attract," he told Finnish President Sauli Niinistö as the two men faced a room of reporters. "Do you believe this? Very impressive."

It ended with Trump excoriating the press as "corrupt people" who undermine U.S. democracy.

"If the press were straight and honest and forthright and tough we would be a far greater nation," he said.

For the 40 minutes in between, the East Room of the White House played host to a roller coaster display of the grievance, victimhood, falsehoods and braggadocio that have come to define Trump's presidency - a combustible mix that has only become more potent as the president faces the growing threat of impeachment.

Trump bared his frustrations in a heated exchange with a journalist who asked him about a July 25 phone call in which Trump pushed the Ukrainian government to investigate one of his potential Democratic challengers, former vice president Joe Biden.

"Are you talking to me?" Trump said, glaring at Reuters' Jeff Mason.

When Mason pressed ahead to ask what the president wanted the Ukrainians to do - a central question in the impeachment inquiry - Trump cut him off and told him to direct a question to Niinistö.

"Did you hear me? Did you hear me?" Trump said, raising his voice and telling Mason not to be "rude." "I have answered everything. It's a whole hoax and you know who's playing into the hoax? People like you and the fake news media that we have in this country."

It was the coda to a foreign leader visit that began and ended with Trump's complaints on full display, starting with a sour venting session earlier in the day in the Oval Office.

The president accused the whistleblower whose complaint alleges presidential abuse of power of being "fake" and "vicious" and into "some bad things." He described the White House official who alerted the whistleblower about Trump's call as a "spy." He said House Intelligence Committee Chairman Adam Schiff, D-Calif., who is running the Democrats' impeachment inquiry, was guilty of "treason."

He blasted House Speaker Nancy Pelosi, D-Calif. - who earlier Wednesday urged her caucus to be somber and prayerful during the impeachment process - saying she "hands out subpoenas like they're cookies."

The afternoon news conference began with a sense of normalcy that defied the sense of chaos enveloping Washington as Democrats ramp up their impeachment inquiry with document requests, subpoenas and congressional hearings.

Trump, playing the role of statesman during his scripted opening remarks, offered condolences to Finland for a recent stabbing attack. He pledged to increase trade with the U.S. ally and encouraged Finnish companies to invest in the U.S.

"We want Finnish companies to join in America's extraordinary economic revival," he said. "So many countries are coming in. It's the hot place. We have the hottest economy in the world and it's the hot place to be."

But as the event turned to the unscripted question-and-answer session, Trump's other personas emerged. He presented himself as a victim, a survivor, a "stable genius," a ruthless counterpuncher and the most productive president in history.

Niinistö looked on, his face betraying his surprise and bewilderment at the dramatic arc of the Trump show. As Trump held court, the Finnish leader hardly got a word in. At one point, when Trump boasted of his wins before the World Trade Organization, Niinistö interjected: "I think the question is for me."

Trump grew most animated as he listed his grievances and described all the forces he believed are arrayed against him and his presidency.

He repeated words like "hoax" "scam" and "fraud" as casually as another president might say NATO or "shared values."

"So the political storm, I've lived with it from the day I got elected," he said. "I'm used to it. For me, it's like putting on a suit in the morning."

He complained that after special counsel Robert Mueller III's extensive probe into Russian election meddling and potential obstruction of justice by the White House, he got only "three days of peace" before the threat of impeachment cast a cloud over the second half of his term.

"I've lived with this cloud now for almost three years," he said.

The president lamented that former House Speaker Paul Ryan, R-Wis., "would never give anybody a subpoena," hesitating when Trump's defenders wanted to use congressional powers to investigate Democrats and the FBI. By contrast, he said, Pelosi was a subpoena-approving machine.

Trump also embraced a sense of victimhood-by-proxy for his aides, some of whom were implicated in Mueller's probe.

"They came down to Washington to do a great job," he said of his aides, claiming that the investigations had "destroyed" them. "They left Washington dark."

But Trump also presented himself as the battle-scarred victor who was uniquely capable of fighting back against his perceived enemies and on behalf of his supporters.

In describing how he has survived the "greatest hoax" in history and a "fraudulent crime on the American people," he cited conservative media figures.

"People have said to me how does he handle it?" Trump said. "Rush Limbaugh said I don't know of any man in America that could handle it. Sean Hannity said the same thing."

He suggested he was considering "bringing a major lawsuit" to respond to Mueller's investigation, a suit that presumably would pit the head of the executive branch against his own Justice Department.

When a reporter asked Trump about a New York Times report that revealed contact between the whistleblower and Democratic staff on the House Intelligence Committee, Trump zeroed in on Schiff and accused him of orchestrating the entire episode.

"It shows that Schiff is a fraud and I love that question," Trump said after taking a printed copy of the story from his suit jacket. "That's big stuff, that's a big story."

Niinistö, who spoke for just a few minutes during the 40-minute news conference and 17-minute Oval Office meeting, talked about the greatness of U.S. democracy and encouraged Trump to "keep it going." He also offered a mild rebuke of Trump's constant berating of the European Union, which the president has said was formed to take advantage of the U.S.

"I wanted to take up with the president the importance of trans-Atlantic cooperation," he said. "We all know Europe needs U.S.A., but I say that U.S.A. needs also Europe. We know the price of everything. We should recognize also the value of everything."

Trump did not seem to mind or notice the light criticism, and he spent much of the news conference boasting about various aspects of his presidency, which he said was the most productive in U.S. history. He credited himself for cutting taxes and regulations, celebrated the "booming" economy - even as the stock market fell nearly 500 points Wednesday - and celebrated veterans health-care legislation he signed.

He saved some of his most effusive praise for the controversial phone call he had with Ukrainian President Volodymyr Zelensky, a conversation that has become a central component of the Democrats' impeachment process.

At various points he described the call as "beautiful," "perfect," "great" and "100 percent."

"Not a thing wrong with it," he said of the call. "Believe it or not, I watch my words very carefully. There are those that think I'm a very stable genius, okay?"

When Mason asked Niinistö about a recent World Trade Organization case in which the U.S. prevailed, Trump jumped in and claimed that his presence was what helped tip the judgment in his government's favor.

"You never had wins with other presidents, did you?" Trump said. "But we are having a lot of wins with WTO since I became president."

In fact, the case started long before Trump became president, and previous presidents also have presided over successful WTO cases.

But such minor details didn't stop Trump from engaging in his unique form of bragging.

"Because I know that I'm right and because I'm doing a great job for the American people," he said. "I'm very, very happy living the way I'm living."

(Except for the headline, this story has not been edited by NDTV staff and is published from a syndicated feed.)
Comments
Donald TrumpSauli NiinistöJeff Mason