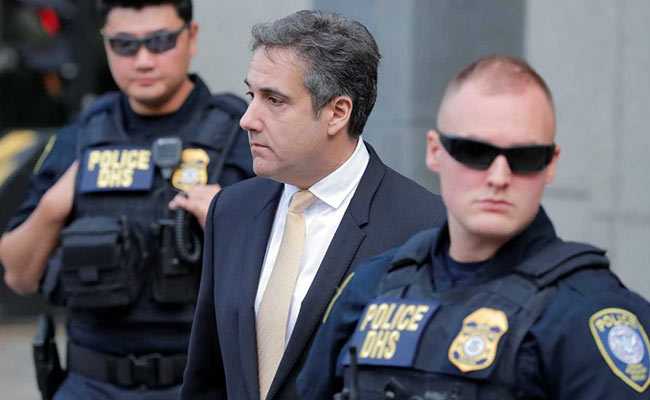 In December, Michael Cohen was sentenced to three years in prison.

President Donald Trump's former lawyer Michael Cohen was subpoenaed Thursday to testify to the Senate Intelligence Committee in the Russia investigation, one day after he postponed a House appearance saying he had been threatened by Trump.

"This morning the Senate Intelligence Committee served Michael Cohen with a subpoena," Cohen's attorney Lanny Davis said in an email to AFP.

Davis gave no date, but according to reports the committee wants him to appear in early February. It was not clear if the testimony will be public or behind closed doors.

On Wednesday, Davis announced that Cohen was putting off voluntary testimony before the House Oversight Committee scheduled for February 7, alleging that Trump and his lawyer Rudy Giuliani had threatened Cohen and his family.

"Due to ongoing threats against his family from President Trump and Mr Giuliani, as recently as this weekend, as well as Mr Cohen's continued cooperation with ongoing investigations, by advice of counsel, Mr Cohen's appearance will be postponed to a later date," Davis said.

"This is a time where Mr Cohen had to put his family and their safety first," he added.

Cohen pleaded guilty last year to multiple charges related to work he performed for the president, and pledged to cooperate with Special Counsel Robert Mueller.

Mueller leads the investigation into possible collusion between the Trump campaign and Russia, a probe that increasingly menaces the White House.

In December, Cohen was sentenced to three years in prison, and Democrats want to see him testify before he reports to prison on March 6.

They are interested in his and the Trump campaign's contacts with Russia before the 2016 election.

In addition, Cohen has suggested that the White House knew he was going to lie in previous congressional testimony to protect Trump, raising questions about whether he was directed to lie by the president or his aides.

After Cohen postponed his House appearance Wednesday, top Democrats said they still expect him to testify despite the alleged threats, suggesting they also could issue a subpoena.

"When our committees began discussions with Mr Cohen's attorney, not appearing before Congress was never an option," Elijah Cummings, the Democrat who leads the Oversight Committee, and House Intelligence Committee head Adam Schiff said in a joint statement.