Trump's Aides Offer A Glimpse Of Their 'Revealing' Private Notes

A few months later, after he had taken office, Trump was ridiculed when he was photographed with a classified information lockbag under a pile of papers on the Resolute Desk with a key dangling from the lock. Since taking office, Trump has presided over photo-ops at which he has left his stagenotes in plain view.

In tweets and speeches, President Donald Trump has taken pride in voicing his inner thoughts, no matter how blunt or offensive. So perhaps it should come as no surprise that he and his aides also have made a habit of revealing their personal notes to the public.

This week, national security adviser John Bolton addressed reporters at the White House while holding a yellow legal pad bearing confidential notations in plain view of cameras. Among them was what appeared to be a potential plan to mobilize military troops in response to Venezuela's political crisis, prompting media speculation over how Bolton, a seasoned diplomat, could have made such a goof.

Some pundits speculated that Bolton, a veteran of the George W. Bush administration, was sending an unspoken warning to Venezuela's teetering regime. But Trump's critics saw the incident as endemic of a pervasive carelessness of a White House that eschews process and preparation in favor of the president's impulsiveness and disdain for protocol.

"I can't recall an incident like this in the Obama administration," said Ned Price, who served as a national security spokesman for President Barack Obama. "We had stern admonitions to always have cover sheets, always carry sensitive information in a folder."

Revealing private notes, including Bush asking written permission for a "bathroom break" at the United Nations in 2005, have bedeviled past presidents - but rarely with the frequency of the Trump White House. Obama's White House photographer, Pete Souza, occasionally posted photos of marked-up presidential addresses, but those were carefully curated to cast the president as a thoughtful writer and editor. 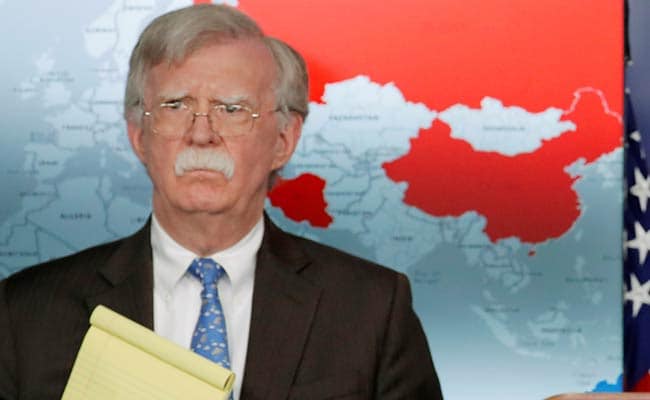 Bolton's appearance in the briefing room - just days after photographers snapped senior aide Stephen Miller's notes, including the underlined term "Radical Democrats," during a White House meeting - was something of a flashback to the earliest days of the administration.

During the transition after the 2016 election, as Trump was interviewing Cabinet candidates, Kris Kobach, then the Kansas secretary of state, was photographed carrying exposed notes outlining a hard line immigration agenda for the Department of Homeland Security as he arrived at Trump's estate in Bedminster, New Jersey.

Among other things, Kobach was proposing to deny entry to all Syrian refugees - at a time when the Obama administration was accepting thousands of them.

A few months later, after he had taken office, Trump was ridiculed when he was photographed with a classified information lockbag under a pile of papers on the Resolute Desk with a key dangling from the lock.

"Never leave a key in a classified lockbag in the presence of non-cleared people. #Classified101," Sen. Martin Heinrich, D-N.M., wrote in a tweet.

In the wake of that "snafu," one former Trump aide recalled Tuesday, West Wing staffers were reminded to be mindful of "securing your personal effects - let alone sensitive or classified information."

"If you worked in an area that was accessible to press, it was second nature to keep your desk free of information that you did not want viewed," said the former aide, who spoke on the condition of anonymity to discuss an internal matter.

Trump has not always abided by such guidance. During his campaign rallies, Trump had occasionally flashed notes to the crowd, and at a town hall-style event in Sept. 2015, a photographer captured him with talking points including the words "Tom Brady" - a reference to the New England Patriots quarterback who had tacitly endorsed him two days earlier.

Since taking office, Trump has presided over photo-ops at which he has left his stagenotes and talking points in plain view. He has waved private letters from North Korean dictator Kim Jong Un with some words visible to cameras. And he has displayed official documents, including an accord with Kim in Singapore last June, that disclosed details that aides had yet to publicly disseminate - prompting reporters to break news by examining news photographs of the documents.

Trump's handwritten notes have shed light on a president more comfortable in colloquial language than the more bureaucratic or carefully worded statements typically drafted by a national security team, policy experts or diplomats.

During an executive order signing on trade in April 2017, for example, news photographers captured images of Trump's prepared remarks typed out on white paper. At the bottom was a handwritten notation in black marker.

"I want to end by saying I'm not happy about Canada," the notation begins.

In another example from Nov. 2017, Trump was photographed in the Roosevelt Room with a paper bearing the handwritten note: "MISSILE WAS LAUNCHED FROM NORTH KOREA - WILL TAKE CARE OF IT."

Trump's public statements hewed closely to the notes he wrote for himself. But the former Trump aide dismissed the disclosures as little more than a "15-minute sensation on Twitter."

"I don't recall these sorts of instances ever being anything significant," the former aide said. "It's certainly not Palin-esque."

The aide was referring to former Republican vice presidential candidate Sarah Palin, who was photographed in 2010 with notes written on her hand during a question-and-answer session at the National tea party Convention. That prompted Robert Gibbs, then the Obama White House press secretary, to mock her by appearing in the briefing room with a faux shopping list on his hand that included the items "Hope" and "Change."

In Feb. 2018, Trump made a more insensitive gaffe when he was photographed holding a notecard while meeting with survivors of a mass shooting at Stoneman Douglas High School in Parkland, Florida. Among the talking points an aide had prepared was the phrase "I hear you," suggesting the president needed coaching on basic empathy.

"The big picture can be in the small details," Associated Press photographer Carolyn Kaster told a colleague in explaining her photograph of the notecard.

By then, Trump's notes were a regular feature of news photos. Calling reporters into a Cabinet meeting in July 2018, Trump attempted to do damage control over remarks he had made during a summit with Russian President Vladimir Putin in Helsinki in which he had cast doubt on U.S. intelligence findings that Moscow had interfered in the 2016 elections.

On a table in front of him, Trump's prepared remarks included a crossed out a line that the administration would bring "anyone involved in that meddling to justice."

Elsewhere on the paper, Trump had written in black marker: "THERE WAS NO COLUSION (sic)" - repeating his blanket denial that his campaign did not conspire with the Russian government. A New York Times photographer not only zoomed in for a shot of Trump's hands folded next to the paper, but flipped the image over on social media to ensure the words could be read easily.

"Any president or national security leader has to be a fool to be flashing their notes to our adversaries, and it's the very least we can expect of the president to be discreet," presidential historian Douglas Brinkley said.

Besides, he added, "when these things are suddenly revealed, they make you look dumb. If you need to tell yourself there was no collusion, you're in trouble."