The Trumps spent 23 minutes visiting Bush, his wife Laura, by all accounts a cordial meeting in which the former president exchanged kisses on the cheek with the current first lady at the curb. 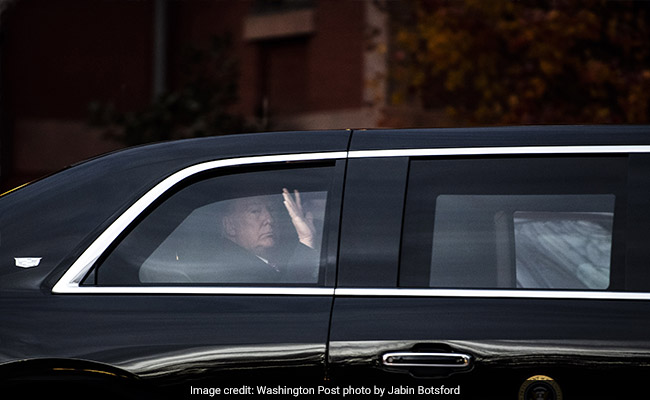 President Donald Trump leaves in the presidential limo after meeting the Bush family.

But the actual distance was just 250 yards - a route Trump and his wife Melania traveled in the presidential parade limousine, with a motorcade of at least seven other vehicles.

The Trumps spent 23 minutes visiting with Bush and his wife Laura, by all accounts a cordial meeting in which the former president exchanged kisses on the cheek with the current first lady at the curb.

It was the latest in a series of magnanimous gestures that President Trump has made this week to honor the legacy of former president George H.W. Bush, whose state funeral will take place at National Cathedral on Wednesday.

The need for the motorcade, however, prompted questions, and a healthy dose of speculation, about why the Trumps were unable - or unwilling - to simply walk across the street.

"Presidents, including the last one, have made the walk before," observed Ned Price, who served as National Security Council spokesman in the Obama administration.

In an email, Price pointed to President Barack Obama walking Chinese President Xi Jinping from the White House to Blair House after a private dinner during Xi's state visit in September 2015. He also recalled another occasion, a year earlier, when Obama and White House chief of staff Denis McDonough left the White House for a quick trip to a nearby Starbucks, with Obama joking to reporters that "the bear is loose" - a reference to his 2008 campaign when he felt confined by his newfound Secret Service bubble.

"It's good coffee. The President bought it," Price recalled McDonough telling him when they returned to the White House. Pennsylvania Avenue, and Lafayette Park, had been cleared of pedestrians, who usually congregate in front of the White House for pictures or protests, as is custom when foreign leaders or other dignitaries are staying at Blair House.

Presidential motorcades typically encompass more than a dozen vehicles, including Secret Service counter assault teams, medical personnel, White House aides and the press corps. In this case, the pool reporters shadowing Trump's movements were positioned ahead of time across the street from Blair House and were not in the motorcade, which included at least eight vehicles, according to video footage.

The weather Tuesday was overcast and cold but there was no rain. President Trump was the only one of the four to wear an overcoat.

White House aides declined to comment when asked why the Trumps chose to take a motorcade.

Obama often employed a full motorcade for short trips, including fundraisers at nearby hotels such as the Jefferson, just a few blocks from the White House. Those trips entailed closing roads in downtown Washington, sometimes during rush hour, thereby snarling evening commutes.

Like his predecessors, Trump also took a motorcade to the recent lighting of the National Christmas Tree, on the Ellipse - though Trump left the press pool behind after his speech when he returned to the White House with the reporters stranded outside in frigid temperatures, reduced to tweeting their displeasure. (The White House pool of 13 reporters, photographers and videographers has long shadowed the U.S. president to record his movements for history and in case of an emergency.)

According to a pool report, the Bushes did not walk the Trumps back to the curb after the private meeting inside Blair House. Trump walked his wife to her side of the limo and waved to the press corps, but he did not respond to their shouted questions as he re-entered the vehicle for the short ride home.