President Donald Trump did not express sympathy for the two women who this week gave graphic accounts of the verbal and physical abuse they said they suffered while married to Porter, who resigned on Wednesday. 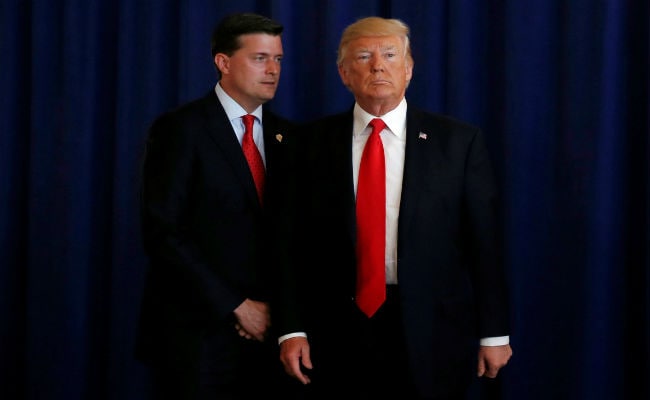 Washington: President Donald Trump on Friday praised White House aide Rob Porter, who resigned this week after allegations that he abused two former wives, and stressed that Porter has maintained his innocence.

"He says he's innocent, and I think you have to remember that. He said very strongly yesterday that he's innocent," Trump told reporters in the Oval Office.

Trump did not express sympathy for the two women who this week gave graphic accounts of the verbal and physical abuse they said they suffered while married to Porter, who resigned on Wednesday.

But he was supportive of his former staff secretary.

"It's obviously a tough time for him. He did a very good job in the White House. And we hope he has a wonderful career," Trump said. "But we absolutely wish him well."

Porter's abrupt departure has raised questions about how long it took Trump's team to act on the accusations.

Some senior White House officials were generally aware of the allegations before Trump found out a report surfaced on DailyMail.com, a source familiar with the matter said.

White House Chief of Staff John Kelly has so far taken the brunt of the blame. Kelly told reporters on Friday that he was informed in November that Porter had allegations against him that were delaying his security clearance, but that he did not know the full extent until this week, MSNBC said.

Kelly and Press Secretary Sarah Sanders both issued statements calling Porter a man of "integrity" in response to the initial Daily Mail report that Porter's two former wives had accused him of abuse.

Kelly later said in a statement he was shocked by "new" allegations against Porter, stressing that domestic violence is unacceptable.

Trump has been privately complaining about Kelly and wondering whether to replace him, according to two sources familiar with the matter.

This source said Kelly had offered to resign, but the White House denied that, with one official saying Kelly "is doing fine in terms of where he stands with the president."

White House spokesman Raj Shah had said on Thursday that Kelly was not "fully aware" of the extent of the allegations against Porter until photographs of one of his former wives with a black eye emerged on Wednesday.

Shah also conceded the crisis could have been better handled by senior White House officials. A source said Trump gave Shah a mild rebuke for the comment, advising him never to apologise.

Over the past two years, more than a dozen women have accused U.S. President Donald Trump of making unwanted sexual advances against them. In all instances, they claimed the purported misconduct occurred years before he entered politics.

Trump denied the allegations, accused rival Democrats and the media of a smear campaign, and went on to win the 2016 election.

Reuters has not independently confirmed the allegations against Porter, or against Trump.

The position put Porter in close contact with the president and required a security clearance. But Porter, a Harvard Law School graduate, had not yet received that clearance because the required background check was still ongoing.

Jennie Willoughby, one of Porter's ex-wives, told NBC's "Today" show on Friday that she told the Federal Bureau of Investigation during Porter's background check that he had been abusive toward her.

Promoted
Listen to the latest songs, only on JioSaavn.com
"Of course, I was part of the background check and I was completely honest with what my experience of the marriage, including telling the police instances of abuse or police contact," said Willoughby.
© Thomson Reuters 2018