Trump Visits Tornado-Hit US City, Then Autographs Bibles For Survivors

At the church, Trump addressed dozens of residents and victim's families, and recounted some of the damage he saw there, days after one of the worst tornado outbreaks in recent years killed 23 people. 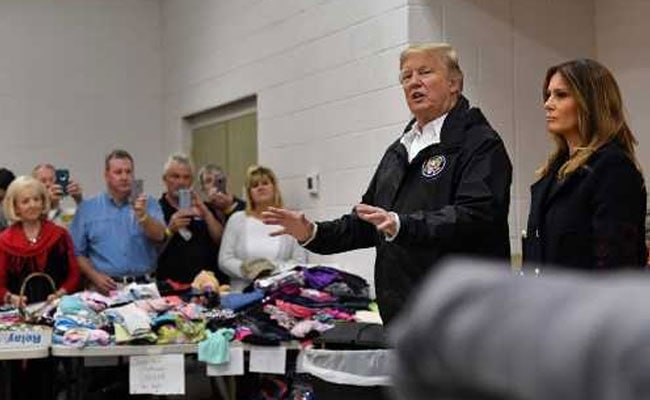 Trump addressed dozens of residents and victim's families during a tour of tornado-damaged areas. (AFP)

Residents of a small Alabama city, still reeling after deadly tornadoes devastated their corner of the state, said President Donald Trump's visit Thursday was "a godsend."

He punctuated his trip at a Southern Baptist church in Opelika, Alabama, with another religious overture, one that was distinctly on-brand: when asked, the president signed several of the churchgoers' Bibles.

After adding his unique, frenetic signature to a 12-year-old boy's Bible, the crowd of onlookers erupted in applause, a pool report noted. One church volunteer, Ada Ingram, told the reporters that Trump's visit was a blessing. Hopefully, it brings the community together, she said.

"I enjoyed him coming," Ingram said. "I think it's a godsend."

"She just reached out there and said, 'Mr. President, would you sign this?' " the Associated Press reported.

At the church, Providence Baptist, Trump addressed dozens of residents and victim's families, and recounted some of the damage he saw there, days after one of the worst tornado outbreaks in recent years killed 23 people.

"I've never seen anything like it," Trump said, according to the pool report.

In keeping with his vow to the state, Trump confirmed that officials from the Federal Emergency Management Agency are indeed doing an "A-plus job" The crowd there praised Trump, who, in turn, told them, "We couldn't get here fast enough . . . We love the state of Alabama."

But the president's critics were quick to chide him for his impromptu book signing, an act usually reserved for the author or authors of the book in question.

"In Trump's defense, he wrote as much of the Bible as 'Art of The Deal,' " one commenter tweeted, referring to the first of more than a dozen books for which Trump has hired a ghostwriter.

The president's signature, on its appearance alone, may be an admittedly odd adornment to any sacred text. It's been described as resembling "the EKG of a tachycardia patient" or "a failed polygraph test." One handwriting analyst who has been following Trump's writing style since the 1990s told The Boston Globe that Trump's signature portrayed "power and control and rigidity."

"There's absolutely no softness in his signature, it's just mean and tough and rigid, and there is no room for anybody else," the analyst, Sheila Lowe, said. "He's not interested in anyone else's opinion."

Some experts said that any signature in a Bible, no matter the penmanship, would be frowned upon.

"Growing up in a religious home, it would've been seen as blasphemous as having someone signing your own name," said, Jamie Aten, an evangelical and psychologist at Wheaton College.

Aten, who specializes in the effects of disasters on the religious mind, said it's common for disaster survivors to use the Bible to help make meaning of what happened. Though he's never seen survivors bring Bibles for someone to sign.

"Maybe you penned your own named so people knew it was yours," Aten said. "I've never seen anything like it."

But Peter Manseau, the Smithsonian's curator of religion, said past presidents have signed Bibles, including George W. Bush and President Ronald Reagan.

"If this was an organized effort where the president was giving out stacks of signed Bibles that would strike me as odd to say the least, but from what I can tell the event today wasn't outside the norm," Manseau said. "Presidents seem to sign a lot of random things put in front of them."

Trump actually has some personal experience with signed bibles. Charismatic televangelist Paula White recounted a request Trump made in 2005 for a Bible signed by the late evangelist Billy Graham, one of the most popular American spiritual leaders of the last century. White managed to procure it for Trump's 60th birthday. The inscription read: "To Donald Trump, God Bless you always. Billy Graham."

John Fea, a historian at Messiah College, a Christian school in Pennsylvania, said he's also never heard of any president signing Bibles before. But, Fea said, Trump's actions do fit his appeal to many white evangelicals in the South.

"The fact that people are bringing Bibles to him says a lot about them," Fea said. "It seems to imply that they see him not only as a political leader but a spiritual savior for the nation."

Trump, who is typically seen at church on Easter and Christmas, has dropped many Bible references since declaring he'd run for president. On the campaign trail, he nodded to the Bible when he spoke to thousands of students at Liberty University in Virginia.

"Two Corinthians, 3:17, that's the whole ballgame," Trump said. Many in the crowd laughed because he said "two," instead of "second" Corinthians.

That year, Trump told David Brody, a reporter for the Christian Broadcasting Network, he liked the Bible verse that read "never bend to envy," but it was unclear which verse he was identifying.

Bloomberg reporters later asked him whether he was "an Old Testament guy or New Testament?" He responded, "Probably equal."

(Except for the headline, this story has not been edited by NDTV staff and is published from a syndicated feed.)
Comments
Donald TrumpAlabama