Trump Tweeted Clip Of Him Singing At The Emmys. Because Of The Farm Bill

Here's the bizarre spectacle we never knew we needed to epitomize these times: President Donald Trump on Thursday tweeted a fairly mundane missive, at least by his standards. 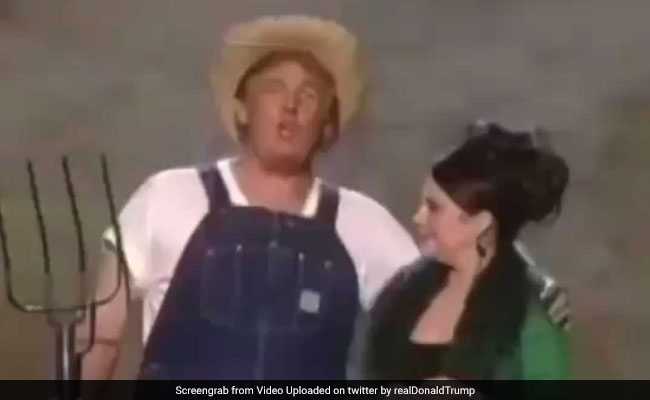 The year is almost over, but we've finally reached peak 2018.

Here's the bizarre spectacle we never knew we needed to epitomize these times: President Donald Trump on Thursday tweeted a fairly mundane missive, at least by his standards. "Farm Bill signing in 15 minutes!" he wrote, alerting his followers that he was about to sign off on legislation that Congress passed earlier this month. But then he added a video of himself performing at the 2005 Emmys alongside actress/comedian Megan Mullally, in a skit in which the pair riff on the "Green Acres" theme song.

So what does the president's decade-plus-old performance have to do with the farm bill, one might ask? Well, see, in the skit, Trump is wearing overalls, which is an item of clothing worn by farmers (at least in Hollywood). And he's holding a pitchfork, which everyone knows is an agricultural implement used by said farmers.

In the 2005 TV awards ceremony, Trump played Eddie Albert's "Green Acres" character, a Manhattanite who chucks city livin' for the pleasures of the country, while "Will and Grace" star Mullally took the Ava Gabor role of the wife who just wants her Park Avenue lifestyle back (note that Mullally changed the "Times Square!" lyric to "Trump Tower!" in honor of her duet partner).

Moments after Trump tweeted, Mullally registered shock and maybe a little embarrassment on the same social media platform. Her first message was a succinct "omg," which is pretty much the reaction of everyone who saw it, too. Next, she wrote "if you guys need me, i'll be in a hole in the ground."

From another pol, the tweet might have seemed to be a playful, self-deprecating bit. But Trump doesn't really do humor, and definitely not the kind poking fun of himself. So let's unpack what's going on here.

First, the president's well-documented obsession with celebrity is clearly on display. Back in 2005, he wasn't toxic to Hollywood types the way he is now (Kanye and Kid Rock being notable exceptions), so the tweet was a reminder that he used to surround himself with famous people.

And secondly, Trump's missive underscores his long-running preoccupation with the Emmys. Ever since his show "The Apprentice" lost to "The Amazing Race" in the category of outstanding reality competition show in 2004, Trump has been publicly venting about the awards. It even came up during a presidential debate with Democratic candidate Hillary Clinton, who was needling Trump with a mention of the subject after suggesting that he might not accept the outcome of the election if he lost.

"You know, every time Donald thinks things are not going in his direction, he claims whatever it is rigged against him," Clinton said, later adding he "started tweeting that the Emmys were rigged against him."

To which Trump interjected, "Should have gotten it."