The Phone Call That Set US Defence Secretary's Resignation In Motion

"You know what? It's yours," US President Donald Trump said of Syria. "I'm leaving." 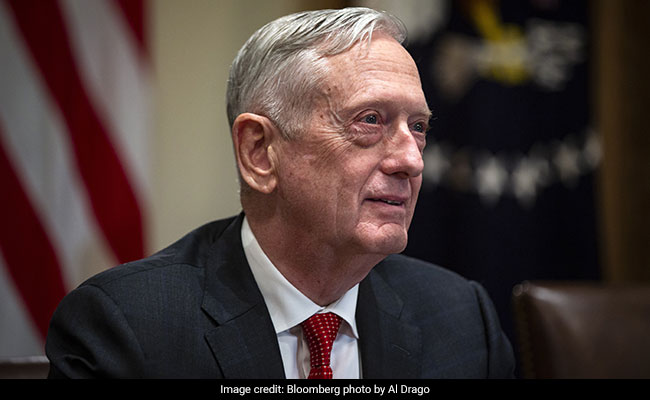 US Defence Secretary Jim Mattis quit on Thursday after Trump announces pulling out of troop from Syria.

When he spoke to President Donald Trump on the telephone a week ago Friday, Turkish President Recep Tayyip Erdogan's agenda had not changed from when they met two weeks earlier at the Group of 20 summit in Argentina.

He repeated his inability to understand why the United States was still arming and supporting Syrian Kurdish fighters to conduct a ground war against the Islamic State. To Turkey, which shared a 500-mile long border with Syria, they were a national security threat, allied with Turkish Kurds that even the United States considered terrorists.

The Islamic State, according to Trump himself, had been defeated, Erdogan said. Turkey's military was strong and could take of any remaining militant pockets. Why did some 2,000 U.S. troops still need to be there?

The call, shorthanded in more or less the same words by several senior administration officials, set off events that, even by the whirlwind standards of Washington in the Trump years, have been cataclysmic. They ended, for the moment at least, with Thursday's resignation of Defense Secretary Jim Mattis.

This account of the tumultuous past week is drawn from interviews with government officials in the White House and across national security departments, all of whom spoke on the condition of anonymity while the dust was still settling. The White House and the Turkish Embassy did not respond to requests for comment.

For those who cared to defend the decision, including some on Trump's staff, a minority of lawmakers, and presumably a good portion of his unshakable supporters across the country, Syria withdrawal was a promise kept. Trump had long said he would reduce U.S. commitments overseas. Money, he said, was to be spent on protecting the homeland, and not in some faraway place that should be able to take care of itself, or at least pay the United States for doing it.

But for many members of Congress - Republicans and Democrats - and the U.S.-led coalition against the Islamic State, it was an unmitigated disaster. None was officially informed in advance of Trump's announcement, made on Twitter early Wednesday. Most warned that Turkey, whose troops were poised on the border waiting for U.S. forces to leave, would slaughter U.S. Kurdish allies. Overall, they said, it was nothing less than a capitulation to the other two powers on the ground in Syria - Russia and Iran.

For Trump it was an assertion of presidential prerogative that he had repeatedly been constrained from exercising. It came at a time when he was feeling a loss of control over a range of issues, from the special counsel's Russia investigation to the falling stock market and a threatened government shutdown.

In the days after the Friday call with Erdogan, Trump's senior national security team tried, and failed, to get him to reconsider, saying it was the worst possible moment for such an abrupt action.

On Wednesday evening, in the Oval Office with aides, Trump complained that Mattis and others were still trying to dissuade him from the withdrawal. Syria, he railed, costs "a fortune," and "for what? What are we getting out of this?"

He had given Mattis and "all the other fellas" months to provide him with solutions on Syria, and no one had given him any, Trump said.

Top White House aide Stephen Miller, one of Trump's most hard-line advisers, had long told the president that his own defense secretary did not support his "America First" agenda.

For Mattis, Miller was right if "America First" meant doing things that were uninformed by history or respect for what he considered the foundational building blocks of U.S. national security. The Syria decision, he believed - along with Trump's order to prepare for troop withdrawals from Afghanistan - was the epitome of the president's careless way of operating.

On Thursday afternoon, before keeping a previously scheduled appointment with Trump, Mattis sat in his Pentagon office and watched a video lasting one minute and 19 seconds that the president had posted of himself on Twitter the night before. "We have won against ISIS," the Islamic State, he said. "We've beaten them badly, and now it's time for our troops to come back home." 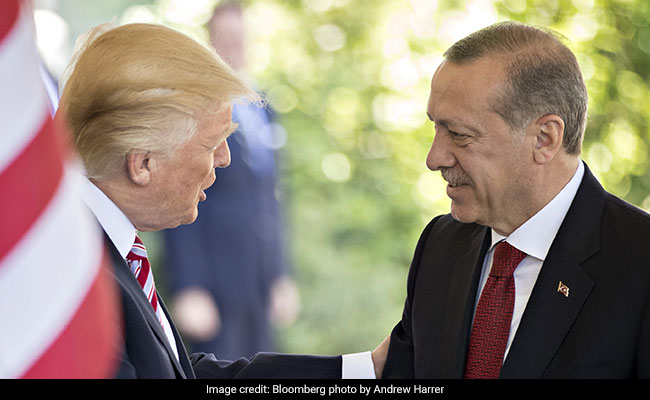 ISIS, according to Trump himself, had been defeated, Turkey's Recep Tayyip Erdogan said.

Having to call families of military casualties was "heartbreaking . . . no question about it," Trump said, and there was "nobody happier" about his decision, he said, pointing up at the sky.

At 3:30, Mattis departed the building for the brief ride to the White House, his resignation letter in hand. It had been written for a long time, at least in his head, a "fill in the blank" missive about his broad differences with Trump, in which Syria had finally filled the empty space.

Before he left, he had ordered copies of the letter to be made for distribution to senior staff and the media.

It wasn't just Syria, a senior Pentagon official said, but "a series of decisions. . . . If there was some big strategic benefit to abandoning the Kurds and doing this, then maybe there would have been a different answer. But this was seemingly very arbitrary."

Mattis was done trying to talk Trump out of it. In a calm, 45-minute conversation with the president, he talked about their divergent views of the world and how to treat allies and partners. Trump, he said, deserved someone who thought more like he did. They thanked each other, and it was over.

His senior staff had gathered in the Pentagon's Nunn-Lugar conference room, named after two Senate statesmen who had cooperated across party lines to help reduce the threat from nuclear weapons.

The Defense Department's mission was about more than one man, Mattis calmly told those in the room. More than anything , it was about "the sergeants and the privates who are on watch." They were all doing their jobs, he said, and "we're fine."

Almost from the first moment Trump took office, he and Mattis had sparred over how best to employ U.S. military might. Initially, Mattis found a way to manage their differences, seeking to refashion Trump's views about restoring American military strength so they would benefit the world at large.

According to one person familiar with their relationship, it was less about Mattis seeking to win Trump over to traditional foreign policy principles than it was about "translating his desires into a coherent national security strategy."

As time passed, the needle became harder to thread. On a series of issues, from Trump's decision to pull out of the Iran nuclear deal, his ban on transgender troops, his embrace of a new branch of the military for space and, perhaps most centrally, his brusque treatment of allies from Europe to Asia, the dissonance in their styles and beliefs became increasingly hard to paper over. Most recently, Mattis was taken aback early this month when Trump rejected his recommendation for the new chairman of the Joint Chiefs of Staff, an officer he expected to work closely with.

It was a year ago, in December 2017, when Trump again brought up what he had said during his presidential campaign. Why were U.S. troops in faraway Syria, and why was the United States paying to rebuild parts of the country destroyed in the anti-Islamic State campaign when others in the region - many of them oil-rich monarchies - were deriving benefit from the effort?

As they had before, national security advisers reminded him that the Islamic State was plotting terrorist attacks in the West, remained a deadly insurgent force, and only the United States was capable of leading the international coalition effort against it. The U.S. presence was also important to blunt Russian and Iranian influence.

U.S. soldiers, relatively few compared with the numbers in Iraq and Afghanistan, weren't actually fighting on the ground. That was being done by Syrian Kurdish fighters the Americans trained, armed and guided, while U.S. and coalition planes attacked the militants from the air. U.S. casualties were few, and the aid effort, limited to "stability" funds to get communities destroyed in the fighting - often by U.S. bombing - back on their feet, was important to keep the liberated population from turning back to the militants, or coming under the control of the Russian and Iranian supported government of Syrian President Bashar Assad.

In a telephone call that month, Trump asked Saudi King Salman to cough up stabilization money. Some had their doubts that the president had accurately heard Salman, who he said had promised $4 billion. Trump was assuaged for the moment, although the money didn't materialize.

His ire rose again in January, when then-Secretary of State Rex Tillerson gave a speech outlining a long-term U.S. presence in Syria, along with more than $200 million in U.S. stabilization funding.

In April, Trump raised the Syria issue again, canceling the $200 million and sowing the seeds of the final break with Mattis.

It began at a "Make America Great" rally in Ohio. "We're knocking the hell out of ISIS," Trump told a cheering crowd, veering unexpectedly into foreign policy in a speech that was supposed to be about infrastructure. "We'll be coming out of Syria, like, very soon. Let the other people take care of it now."

The president was still riffing onstage when the frantic calls from the White House Situation Room began pouring in to aides traveling with the president. Mattis and Chief of Staff John Kelly scrambled to understand what the president was talking about.

While the Islamic State had been greatly weakened, Kurdish partner forces had a way to go before they could secure eastern Syria and ensure militants didn't return.

After his bombshell, Trump walked off the stage in Ohio and took a swig of Diet Coke. Smiling broadly, he "knew that people were freaking out," said one person familiar with the incident. An aide asked him how quickly he wanted the troops gone from Syria and Trump suggested that they should leave in about a week.

Back in Washington, Mattis and other top aides again sought to defer a decision.

"What the president wanted and the reality of the situation were so different that you couldn't merge the two and get it to work," said one former senior defense official. Mattis and other national security officials persuaded him they needed an additional six months.

John Bolton, the national security adviser, began working on another reason U.S. forces were in Syria - the need to kick Iran out.

That issue was not only important to U.S. policy but to Israel, which was already fighting off the presence of Iranians, and their Hezbollah allies, across the Syrian border.

In September, Bolton and newly installed special envoys to deal with the Syria situation, announced a three-part strategy, based on an indefinite stay for U.S. forces. It included the defeat of the Islamic State, the establishment of a new Syrian government and Iran's departure.

Trump, they said, was onboard.