Trump Shows He's Clueless About Groceries - Like So Many Before Him

The grocery store is a minefield for politicians. 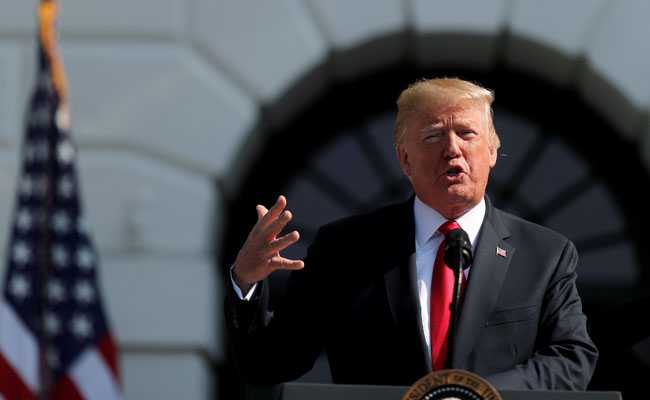 Is it any surprise that the man who lived in a gilded penthouse doesn't know how grocery stores work? At a Florida rally on Tuesday, President Donald Trump related voter ID laws to grocery shopping.

Purchases of alcohol, cigarettes, or cold medicine, or payments made with a check require a photo ID. Purchases of, say, Cap'n Crunch or rhubarb or frozen chicken nuggets do not. "This man has never bought a carton of milk in his life, has he?" tweeted Kaili Joy Gray of Shareblue.

Of course he hasn't. Respectfully: Duh.

The grocery store is a minefield for politicians. In 1992, President George H.W. Bush, who had "lived the cloistered life of a top Washington bureaucrat for decades," according to the New York Times, was described as being amazed by an electronic grocery scanner, technology that had been in use for more than a decade - though his team later clarified that he had been impressed by a particular scanner that could read torn bar codes. Still, in a recession, the characterization that he was out of touch took hold - all the way to the polls.

He's not the only politician to fall in the grocery trap: During his 2007 presidential campaign, Rudy Giuliani underestimated the cost of milk and bread by more than half. And even politicians who go into the store can be criticized for shopping at the wrong one, or buying the wrong thing. In a famous gaffe, then-candidate Barack Obama posed a question at an Iowa rally: "Anybody gone into Whole Foods lately and see what they charge for arugula? I mean, they're charging a lot of money for this stuff." There were no Whole Foods stores in Iowa at the time - and besides, why wasn't he eating iceberg or romaine like a Real American, anyway?

It's a great clueless-rich-person trope in pop culture, too. On "30 Rock," executive Jack Donaghy (Alec Baldwin), having expanded his television company's empire to include couches, gives a rousing speech: "As we speak, our fellow countryman are rolling out our Kabletown Couches on the assembly line, earning an honest day's pay so they can go to the store and buy milk for their family, which costs . . . oh, I don't know, $90 a gallon." In another episode, he refers to the price of a 10-pound bag of potatoes as $400, and says he gets them from the "grocery concierge." Lucille Bluth, the cluelessly rich matriarch of "Arrested Development," has similar grocery problems. "I mean, it's one banana, Michael," she says to her son. "What could it cost? Ten dollars?"

The Post's John Wagner reports that at a briefing on Wednesday, White House press secretary Sarah Huckabee Sanders said she was "not sure" when Trump last went to a grocery store, and added that she wasn't sure it mattered, either. She later said that the comment was in reference to purchasing alcohol, though Trump did not mention alcohol in his remarks and has previously claimed he does not drink it, and has never smoked a cigarette.

British Prime Minister Margaret Thatcher "used to wield a shopping basket and talk about the price of the pound and say something needed to be done about it," British columnist Tim Montgomerie told the BBC. Documents released by the Margaret Thatcher Foundation show that the prime minister was briefed on the prices of common goods like eggs, milk and beer. And weeks after her 2016 loss to Trump, Hillary Clinton was spotted shopping for ingredients for her Thanksgiving dinner in Chappaqua, New York. Joe Biden attended the grand opening of a Costco in Washington and ate a bunch of free samples. (Politicians: They're just like us! Except when they aren't.)

Grocery stores and certain products have come to be political signifiers on their own, too. Trump won only 22 percent of counties with a Whole Foods, wrote Michael Hendrix of the Manhattan Institute. There are "Whole Foods Republicans" and "Sam's Club's Republicans." Belgian endive became a constant joke in the 1988 election, after candidate Michael Dukakis suggested that struggling corn and soybean farmers try growing the less-common produce - and sales of the vegetable shot up immediately.

If knowing the price of common goods is an indicator of how in touch a politician is, perhaps a better indicator for Trump would be fast food. He is known to enjoy McDonald's and Kentucky Fried Chicken. But if you ask him the price of a Big Mac, there's a good chance Trump wouldn't know the answer any better than he'd understand a grocery store: Aides were responsible for picking up his meals.

(Except for the headline, this story has not been edited by NDTV staff and is published from a syndicated feed.)
Comments
Donald TrumpGrocery