Trump Sets Conditions For US To Stay In Iran Nuclear Deal, Tossing Issue To Congress

In a speech, the president calls the 2015 deal weak and threatens to withdraw if U.S. concerns aren't met. 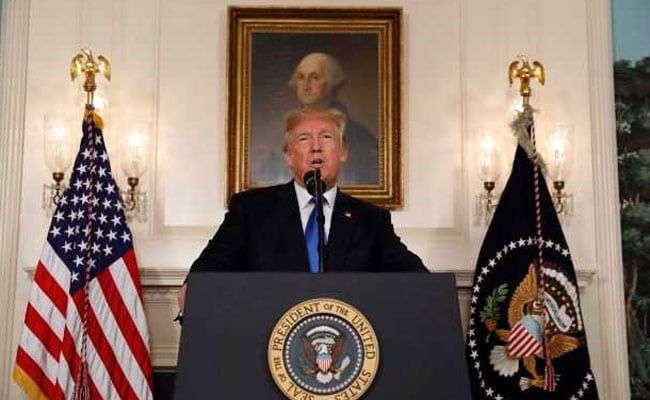 Washington: President Donald Trump on Friday officially disavowed the international nuclear deal with Iran, undermining but not terminating an agreement he called weak and poorly constructed.

The administration asked Congress to attach new caveats that could either alter the pact or lead to its rupture. Sounding frustrated and angry, Trump also threatened to unilaterally withdraw from the seven-nation accord if his concerns are not met.

"We will not continue down the path whose predictable conclusion is more violence, more terror and the very real threat of Iran's nuclear breakout," Trump said in remarks delivered at the White House.

His decision to withdraw presidential "certification" of the deal throws its future into doubt by tying continued U.S. participation to new requirements for Iran. But the approach also falls well short of Trump's repeated campaign vow to scrap the deal altogether, marking the latest collision between his "America first" worldview and the realities of global diplomacy and dealmaking.

The move was immediately met with opposition Friday from U.S. allies that are part of the pact and with skepticism from many U.S. lawmakers, including some Republicans. Iran, meanwhile, responded with a threat of its own, vowing in a statement to walk away if Iranian "rights and interests in the deal are not respected."

If the amendment is approved by Congress and Iran fails to meet the new requirements, the United States could impose new sanctions that would effectively break the deal. Or, if Congress is unwilling, Trump said he could back away on his own.

"As I have said many times, the Iran deal was one of the worst and most one-sided transactions the United States has ever entered into," Trump said, later charging that Tehran is "not living up to the spirit of the deal."

U.S. officials acknowledge that Iran is meeting its technical obligations but accuse the Islamic republic of using the deal as a shield for an expansion of "destabilizing" activities such as the funding and arming of terrorist groups.

Trump said nothing in support of the agreement, which is prized by key U.S. allies and backed, with caveats, by leading members of his administration and many Republicans in Congress.

The agreement - known formally as the Joint Comprehensive Plan of Action - limits Iran's nuclear activities in exchange for the lifting of sanctions that were imposed in response to worries that Tehran was driving quickly toward a bomb.

European allies lobbied Trump hard in recent weeks to not scuttle an agreement they claim has worked as intended to avert the near-term risk of an Iranian nuclear weapon. In a joint statement, the leaders of Britain, France and Germany did not hide their disappointment.

"We encourage the U.S. Administration and Congress to consider the implications to the security of the U.S. and its allies before taking any steps that might undermine the JCPoA, such as re-imposing sanctions on Iran lifted under the agreement," the statement said.

The leaders said their countries would work with the Trump administration to address concerns over Iran's ballistic missile program and "regional activities" that threaten European security. That is a reference to alleged support for terrorism and Iran's support for Syrian President Bashar Assad.

"Allegations, threats & profanity will never intimidate Iranians," Zarif said on Twitter. "Trump will eventually discover this, as every predecessor did."

The 2015 agreement among the United States, Iran, Britain, France, Germany, Russia and China set limits on Iran's nuclear program in exchange for the lifting of what had become crippling economic sanctions.

The pact was a signature foreign policy goal of the Obama administration, which considered it a potential building block for a better U.S. relationship with Tehran after more than three decades of enmity.

Critics of the deal say the agreement does not prevent an eventual Iranian bomb and at best merely delays that capability.

The pact as negotiated is limited to Iranian nuclear activity, which the country claims has always been peaceful. Under the agreement, Iran was allowed to keep some uranium-enrichment capacity.

The deal was not designed to address many other areas of international concern, including Iranian missile programs, its alleged support for terrorism and its human rights record. All of those are subject to separate international and U.S. sanctions that are unaffected by the nuclear agreement.

Trump acted under a U.S. law that is separate from the deal itself and which has been a more pressing irritant to Trump than the underlying agreement. The law requires the president to endorse the deal every 90 days with a certification that Iran is meeting its obligations and that the deal remains in the U.S. national interest.

Trump does not think either condition is true, and he made clear he has not changed his low opinion of the deal itself.

Trump's announcement on Iran is his latest attempt to unwind international pacts entered into by President Barack Obama. Earlier this year he withdrew the United States from the Paris climate agreement, and he began his administration by officially killing an expansive Pacific Rim trade deal. The president has cast all of these pacts as bad deals for the United States.

"If you're most concerned about what will happen in 2025, there's no need to precipitate a crisis in October of 2017 around an arbitrary congressional deadline," Rhodes said. "There's plenty of time to assess how the deal is working, and make decisions around what the United States wants to do."

Trump recited a 30-year litany of grievances against the Iranian regime dating back to the revolution in 1979 and the seizing of hostages at the U.S. Embassy in Tehran. He called Iran the world's leading state sponsor of terrorism, a threat to Israel and a human rights violator.

"Given the regime's murderous past and present, we should not take lightly its sinister vision for the future," Trump said.

The Trump administration is now asking Congress to add conditions for U.S. cooperation that would address Iranian ballistic missile development as well as alleged support for terrorist or extremist groups in Lebanon, Yemen and elsewhere.

Secretary of State Rex Tillerson told reporters during a briefing ahead of the president's address that the administration also wants to address "sunset clauses" in the deal. Those provisions allow Iran to resume certain nuclear activities that raise proliferation concerns beginning 10 to 15 years after the accord took effect in January 2016.

Tillerson called that a "countdown clock to when Iran can have a nuclear program again."

House Foreign Affairs Committee Chairman Edward Royce, R-Calif., said earlier this week that rather than scrap the deal, he wants to "enforce the hell out of it."

One of the key lawmakers who will help shape the future of the deal is Senate Foreign Relations Committee Chairman Bob Corker, R-Tenn., who has been embroiled in a war of words with the president after raising concerns about Trump's stability.

Corker said Friday that the United States would continue to "honor" the Iran agreement but that U.S. sanctions would automatically "snap back" into place if Iran gets within one year of being able to achieve a weapon.

The Trump administration has worked with Corker and Sen. Tom Cotton, R-Ark., on legislation that would set new conditions on U.S. participation in the deal. Cotton has said he will not lead a charge to reimpose sanctions, sending an important signal to other conservatives.

"The effect of what the president has done has really been to constrain our freedom of action," said Rep. Adam Schiff, Calif., the ranking Democrat on the House Intelligence Committee. "Steps we might have taken to constrain Iran's malevolent activity will now be viewed through the prism of the president's hostility to the nuclear deal."

Tillerson acknowledged that neither amending the oversight law nor securing international buy-in to address the deal's expiration clauses would be easy to achieve.

He said Trump is "not particularly optimistic" but is willing to try.

"We may be unsuccessful. We may not be able to fix it. We may end up out of the deal," Tillerson said. "But I think rather than just walk, he's saying, 'I'm going to try to address some of the issues that I think are deficiencies in the agreement.' "