Donald Trump's planned appearance at the sumo match was relatively restrained for a president who became a household name as a reality TV star and often seems to thrive amid - and even encourage - chaos. 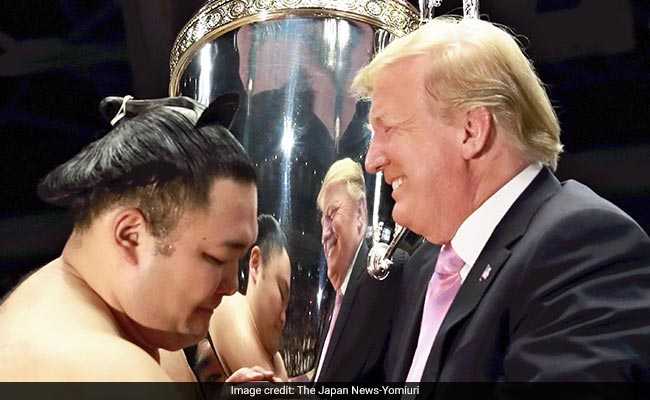 Finally, after a full day of matches, perhaps the biggest star of all - weighing in at 243 pounds, according to his most recent physical - climbed into the sumo ring.

President Donald Trump stepped into the dohyo shortly after 5:30 p.m. Sunday to present "The President's Cup" - a roughly 4 1/2-foot, more than 60-pound trophy that is also the most physical manifestation of the gilded, ceremonial nature of Trump's four-day trip here.

The president seemed to enjoy his low-key star-turn at Ryogoku Kokugikan Stadium here, exclaiming afterward, "That was an incredible evening at sumo."

Trump took in just five matches - some lasting but several seconds - alongside Japanese Prime Minister Shinzo Abe Sunday evening. But he spent the morning seemingly determined to put on a show of his own; at roughly 7:30 a.m. local time, the president fired off a tweet that, in a single social media missive, managed to undercut his national security adviser, reaffirm his ties with a dictator and attack a domestic political rival on foreign soil, all while misspelling the rival's name.

"North Korea fired off some small weapons, which disturbed some of my people, and others, but not me," Trump wrote, in a second tweet that corrected his initial misspelling of former vice president Joe Biden's last name. "I have confidence that Chairman Kim will keep his promise to me, & also smiled when he called Swampman Joe Biden a low IQ individual, & worse. Perhaps that's sending me a signal?"

Less than a day earlier, Trump's national security adviser, John Bolton, had argued the very opposite to reporters here, warning there is "no doubt" North Korea's missile tests violated United Nations Security Council resolutions, and adding that Trump was determined to maintain sanctions pressure on the regime until it backs down.

In a conference call with reporters before Trump departed for Japan, a senior administration official had promised a "substantive" trip, with "some substantive things to announce." But until the president made news with his impromptu tweet Sunday morning, Trump's appearance at the sumo championship seemed to be one of the main events of his visit.

Indeed, Trump spent his first full day in Japan largely as a tourist. Earlier in the day, the president and Abe had played golf at Mobara Country Club in Chiba - complete with selfies and double cheeseburgers made with U.S. beef - and after the sumo championship, the two leaders and their wives headed for dinner at a traditional Japanese charcoal grill robatayaki. (The menu seemed specifically designed for Trump's generally bland tastes in food - a five-course meal that included buttered potatoes, grilled chicken, Wagyu beef with vegetables, and vanilla ice cream).

Trump's planned appearance at the sumo match was relatively restrained for a president who became a household name as a reality TV star and often seems to thrive amid - and even encourage - chaos. Gone were his days as a World Wrestling Entertainment personality who, in 2007, clotheslined WWE Chairman Vince McMahon and faux-pounded him, ringside, before shaving him bald in a viral pay-per-view moment.

Instead, Trump entered the sumo ring after donning slippers - no shoes are allowed in the dohyo - and read from a scroll, the "Certificate of commemoration Asanoyama," in honor of the 25-year-old victor, Asanoyama.

"In honor of your outstanding achievement as sumo grand champion I hereby award you the President's Cup," Trump said.

A sumo official helped him lift the heavy cup and hand it to Asanoyama, who bowed several times. The president shook his hand, clapped, at one point bowed ever so slightly himself, and exited the ring.

Perhaps the most dramatic moment of Trump's award presentation came before the president was even onstage; the silver trophy - which also features an eagle atop it, wings high, and which was displayed Sunday afternoon to some fanfare in the lobby of the hotel where the president is staying - was brought out draped in white cloth, and the crowd gasped audibly when its covering was removed.

Jaime Tiktin, 54, a tourist from Mexico City, said it was a "strange surprise" to learn Trump would be attending the sumo match. Tiktin said he read in the Japan Times that the Japanese "kind of made up this prize to make him feel good," but noted that Trump seemed somewhat subdued.

"He didn't smile at all, he didn't do any gestures," Tiktin said. "It was kind of strange to see him not moving his lips at all."

Tiktin and his wife - who came bearing a homemade "Viva Mexico" sign - said they are not fans of Trump because of the way he has treated Mexicans, but added that maybe Trump was trying to abide by sumo protocol. "I think he was being respectful," Tiktin said. "I hate to say that, but I think he was respectful."

In the run-up to the sumo championship, Trump prompted some griping among the Japanese. Some were annoyed that Trump and his wife, Melania, received special treatment and were allowed to sit in chairs close to the ring. Normally, attendees on the lower levels sit on cushions, called zabutons, and VIPs opt for seats on the second floor designed specifically for them. There was also concern the president's entourage and large security detail would take away seats from Japanese sumo fans.

One widely shared article in the Japanese news media pointed out that the Japan Sumo Association is happy to follow the anachronistic tradition of keeping women from standing in the ring - it would have to be reconsecrated if a woman entered - and asked rhetorically "is not it against their traditions to let Trump sit on a seat by the ring and wear slippers into the ring to present his cup?" (Sumo wrestlers fight barefoot, though slippers were an acceptable alternative to shoes for Trump.)

The zabutons - which spectators often throw into the air to cheer or show their dissatisfaction after a spectacular match - also posed a potential security headache. Sankei, a Japanese daily, even featured a story, complete with a photo of a flying zabuton, headlined, "Mr. Trump to watch the final day matches. Fear of zabuton."

But in the end, Trump proved more a curiosity than a nuisance, the mere mention of his name almost invariably prompting giggles among the spectators.

Kato said he thought Trump should have sat on the floor if he wanted to be close to the ring. "That's the way this place is set up," Kato said. "He should respect the custom. It's the culture."

Nonetheless, he also welcomed Trump to the match. "If he wants to come, fine," Kato said. "There's nothing wrong with watching the sport and paying some respect to Japan's national sport."

Asanoyama, for his part, seemed to be a potential Trump convert. According to Nikkan Sports, in an interview Saturday, the champion said, "I am going to check Wikipedia for Trump-san," apparently to be better prepared.

Yet by Sunday, asked after his victory about being the first person to receive the "President's Cup," Asanoyama was emotional.

"I was overjoyed," he said. "It was almost too much to say in words."