Trump Is Surrounded By Marines. That Didn't Stop Him From Mistakenly Tweeting 'Marine Core.'

The spelling distinction was all Donald Trump had to remember when he tweeted about his visit to a Marine installation outside San Diego on Tuesday. 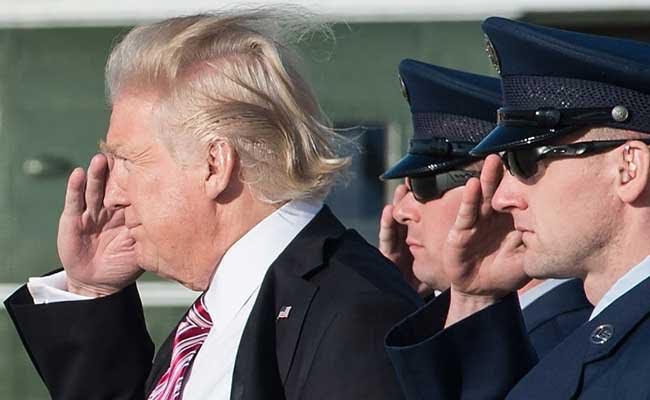 Donald Trump has long championed veterans and the US military, which makes his mistake even more notable

The spelling distinction was all Trump had to remember when he tweeted about his visit to a Marine installation outside San Diego on Tuesday.

"It was my great honor to deliver a message at the Marine Core Air Station Miramar to our GREAT U.S. Military," Trump wrote in a tweet that misspelled "Corps."

Trump's tweet was later deleted, probably because of the spelling error from the commander in chief. He replaced it with a properly spelled version 30 minutes later.

The misfire was notable, given Trump's exposure to the Marine Corps, the branch in which Kelly and Defense Secretary Jim Mattis served.

It is the service presidents probably encounter more than any other.

Marines stand sentry outside the West Wing. And Trump frequently rides in a helicopter, dubbed Marine One when he's onboard; he is saluted by a Marine as he boards and departs, and the helicopter is piloted by Marines.

Troops and veterans often complain of the imprecise language sometimes used by civilians to describe the military, and Hollywood's persistent failure to accurately depict the minute details of uniforms and military lingo is a common complaint in the community.

But Trump has long championed veterans and the U.S. military, making Veterans Affairs reform and increasing the Pentagon's budget cornerstones of his candidacy and presidency.

He's had missteps along the way, though, including one moment that should have left a lasting impression and about how to spell "Marine Corps."

In May 2016, Trump delivered a $1 million check to the Marine Corps-Law Enforcement Foundation that was four months late and was issued only after intense media scrutiny following a veteran-themed fundraiser.

Trump has also made a habit of describing VA as the "Veterans Administration" on the campaign trail - and as president-elect. No such organization exists, at least not anymore: The Veterans Administration was dismantled in 1989, months before the fall of the Berlin Wall, and was elevated to a Cabinet-level agency, the Department of Veterans Affairs.

During his visit to Marine Corps Air Station Miramar on Tuesday, Trump also floated the idea of a creating a "space force," though Mattis has discouraged Congress from establishing a new military branch beyond Earth. The Air Force already operates Air Force Space Command in Colorado.

White House press secretary Sarah Huckabee Sanders did not respond to questions Wednesday asking whether the "Marine Core" spelling was an auto-correct mistake, and whether Trump wrote the tweet, or if it was written by White House social media chief Dan Scavino, who is known to write some of the president's tweets.

(It is a tricky word: President Barack Obama once mispronounced it when saying 'corpsman,' a Navy medic who serves alongside Marines.)

Regardless, some veterans made light of Trump's gaffe on Twitter.

"I served for more than 20 years in the Marine Corps. I know that he doesn't read, but the fact that our Commander-in-Chief doesn't know the difference between a Corps and a 'Core; is more than a spelling error. Wrap yourself in the flag all you like - actual veterans have had it."

Marines have toyed with the core/Corps homonym since at least the Vietnam War.

One common phrase recalled by Philip Caputo in his memoir "Rumor of War" is uttered after perceived slights from the Marine bureaucracy - a vulgarity buoyed by a play on the two words.

Promoted
Listen to the latest songs, only on JioSaavn.com
"Eat the apple," the saying goes, "f--- the Corps."