Donald Trump In Pittsburgh Amid Protests, Officials Decline To Join Him

The president and first lady Melania Trump arrived in Pittsburgh on Tuesday where more than 1,300 people have signed up for a demonstration at the same time - declaring Trump "unwelcome in our city and in our country." 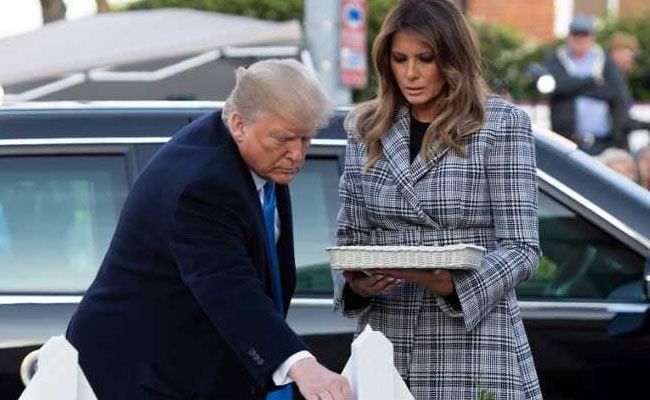 A mourning family doesn't want to meet him. Leaders of his own party declined to join him. The mayor has explicitly asked him not to come. Protesters have mobilized. And yet President Donald Trump visited this grief-stricken city Tuesday, amid accusations that he and his administration continue to fuel the anti-Semitism that inspired Saturday's massacre inside a synagogue.

The president and first lady Melania Trump arrived in Pittsburgh on Tuesday afternoon, not long after the first funerals began for the 11 victims of the mass shooting at Tree of Life synagogue. More than 1,300 people have signed up for a demonstration at the same time - declaring Trump "unwelcome in our city and in our country."

So have relatives of at least one of the victims.

Trump offered to visit with the family of Daniel Stein, a 71-year-old who had just become a grandfather when he was gunned down at Tree of Life. Stein's nephew, Stephen Halle, said the family declined in part because of the comments Trump made in the immediate aftermath of the shooting, when he suggested the synagogue should have had an armed guard.

"Everybody feels that they were inappropriate," Halle said Tuesday. "He was blaming the community."

Stein's funeral was one of four scheduled for Tuesday. In the late morning, hundreds of mourners lined up to see the coffins of Cecil and David Rosenthal - two brothers gunned down at Tree of Life three days earlier, as they celebrated the Jewish Sabbath with Stein and the other victims.

The city's Democratic mayor, Bill Peduto, had asked the White House to consider "the will of the families" before visiting - as well as the resources of a city straining under the deadliest attack on Jews in U.S. history.

"All attention should be on the victims," Peduto said Monday. "We do not have enough public safety officials to provide enough protection at the funerals and ... at the same time draw attention to a potential presidential visit."

After Trump confirmed his visit anyway, the mayor's office said Peduto would not appear with the president. Neither will Allegheny County Executive Rich Fitzgerald, who lives near the synagogue, his office said.

Tree of Life Rabbi Jeffrey Myers - who called out "hate" in U.S. political speech after the shooting - has said he plans to welcome the president. "Hate is not political," he told The Washington Post. "It is not blue or red, it's not male or female, it doesn't know any of those divisions."

Trump visited the Tree of Life synagogue on Tuesday, according to the White House pool report, going inside with his daughter Ivanka Trump and his son-in-law Jared Kushner, both of whom are Jewish and serve as top White House aides. News cameras then captured Trump and the first lady outside the synagogue, placing flowers and stones at memorials to the victims. 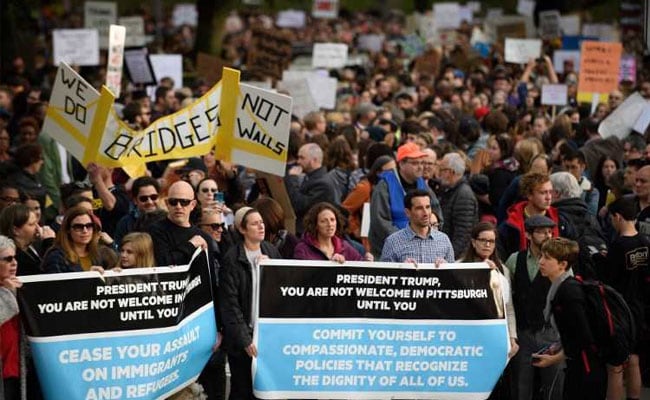 An hour before Donald Trump arrival, more than 100 people had jammed onto a street in Squirrel Hill. (AFP)

About an hour before Trump arrived in the area, more than 100 people had jammed onto a street corner in Squirrel Hill, the predominantly Jewish neighborhood where the synagogue is located and many victims lived. The number swelled as Trump's visit neared, with some marching through the neighborhood streets and declaring themselves angry that he would come to their community.

"This didn't happen in a vacuum,"Ardon Shorr said. "There is a growing trend of white nationalism. And that has been enabled by Trump, who traffics in the kind of conspiracy theories that we know were foremost in the mind of the shooter last Saturday."

Shorr added about Trump's visit. "He's not tolerated here, and we didn't consent to him coming."

Others gathered to protest echoed Schorr's sentiments in criticizing Trump and questioning his visit.

"He's done nothing but stoke the type of fear and hatred that led to this," said Ben Case, 34. "And he's coming here for a photo op and to check it off his list. But we know he's not part of the solution."

Marchers in Squirrel Hill sat down in the middle of a street near the synagogue while Trump was in the area, purposely facing away from him so as to turn their backs on the president.

As Trump left Washington for Pittsburgh, Kara Bernstein was on her way to protests in Squirrel Hill. Bernstein, who lives near Tree of Life and was at another house of worship during Saturday's massacre, went with two friends in part to urge people to vote. Her second motivation, she emphasized, was speaking out against Trump.

"I personally hold Trump and his rhetoric accountable for the tragedy that occurred," she said. She believes his visit is a "distraction from the grieving."

Tree of Life has been closed since Saturday's rampage, which was allegedly carried out by a man who had ranted online that Jews were bringing "invaders in that kill our people."

The suspect, Robert Bowers, was referring to a Jewish group that works with refugees in the United States. Trump has repeatedly referred to migrants as dangerous invaders, and did so again in a tweet on Monday. The president has also repeatedly denigrated "globalists" despite warnings from Jewish groups that the word is code for Jews in anti-Semitic circles, and appeared in one of Bowers's online rants.

Trump's supporters, however, paint him as a friend to Jews, pointing out his Jewish daughter and son-in-law as well as his support for the Israeli government and his condemnations of "evil" anti-Semitism after the attack.

"I'm just going to pay my respects," Trump said in a Fox News interview Monday evening. "I'm also going to the hospital to see the officers and some of the people that were so badly hurt. So, and I really look forward to going. I would have done it even sooner, but I didn't want to disrupt anymore than they already had disruption."

Funerals are scheduled to run at least through Friday.

More than 70,000 people have signed an open letter published by a progressive Jewish organization in Pittsburgh, saying Trump is not welcome in the city until he denounces white nationalism and stops "targeting" minorities in his rhetoric and policies. "For the past three years your words and your policies have emboldened a growing white nationalist movement," the letter reads.

Abraham Foxman, a Holocaust survivor who led the Anti-Defamation League for nearly 30 years, made the same argument to reach the opposite conclusion from the letter signers.

"I want him to come to Pittsburgh," the former ADL director told the Times of Israel. "I want him to go to the funerals. I want him to see the pain of what he didn't do but his words helped create."

Foxman did not think Trump was an anti-Semite, but said the president's language gives bigots legitimacy and a certain kind of boldness. "For Bowers, who all his life fantasized about getting the Jews because the Jews were everywhere, immigration was it," he said.

Trump also has been criticized for repeatedly suggesting that arming more people will stop mass shootings. He made the same suggestion after the attack on the synagogue, even though the gunman shot three police officers before he was captured, and armed officers have been present at multiple rampages in recent years.

The White House woke up to yet another furor on Tuesday morning. Video was spreading virally from a Michigan rally the previous evening, in which Vice President Pence prayed for the synagogue's victims with the leader of a "Messianic synagogue" that urges Jews to accept Jesus as the Messiah - a movement condemned by Jewish leaders as Christian evangelism in disguise.

A Pence aide told The Post that Rabbi Loren Jacobs was invited to the event by a Republican congressional candidate, and said the vice president did not know who the Messianic rabbi was when he called him onstage "to deliver a message of unity. "

A 46-year-old truck driver who gave his neighbors no hint of the bigotry he spewed online, Bowers arrived in federal court Monday in a wheelchair, still recovering from injuries he suffered in a shootout with police at the synagogue.

All throughout his rampage, his capture, and his care in the emergency room at Allegheny General Hospital, where some of the doctors and nurses who treated him were Jewish, Bowers allegedly ranted about wanting to kill Jews.

But he said almost nothing from his wheelchair in the courthouse. Magistrate Judge Robert Mitchell read the charges, including obstruction of exercise of religious belief resulting in death, for which he might face the death penalty. Dressed in a sweatshirt and sweatpants, he was asked if he wanted a public defender because he could not afford an attorney, and said "yes." He remains held without bail.

Bowers faced both state and federal charges. Local prosecutors sought to have Bowers be arraigned on the state charges, but federal authorities declined that, according to the office of Stephen Zappala Jr., the Allegheny County district attorney.

"Ideally, as with these previous prosecutions, the residents of our county would be the ones to sit in judgement of the individual charged with these crimes and should be given the opportunity to determine guilt and subsequent punishment," Zappala said in a statement. "In my experience, I believe this is clearly a capital case. That said, what began as a cooperative effort of local and federal law enforcement evolved into an investigation that was adopted by the FBI and the Department of Justice."

Zappala said his office would let the federal case proceed and the state charges would be on hold and "when pertinent, we will proceed to the appropriate disposition of these charges."

Federal investigators have concluded that Bowers legally acquired and possessed all of the guns recovered from the Tree of Life synagogue and his home, the Bureau of Alcohol, Tobacco, Firearms and Explosives said Tuesday.