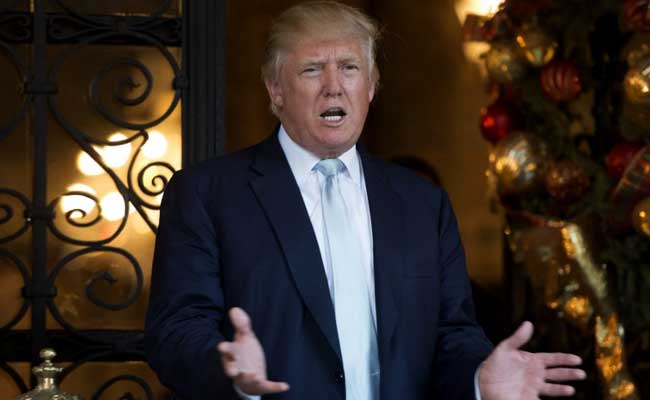 Washington, United States: President-elect Donald Trump on Thursday described America's leading congressional Democrat as a "clown" who behaves like a typical politician, but he nevertheless urged him to work with Republicans.

In his latest early morning tweetstorm, the incoming president attacked Senate minority leader Chuck Schumer -- whom he has previously praised -- amid a mounting row over health care reform.
Republicans have vowed to press ahead with the potentially unpopular campaign promise of gutting President Barack Obama's signature legislation, the Affordable Care Act, which allowed millions of poorer Americans to get coverage but has been criticized for raising insurance premiums.

Republicans -- who control both houses of Congress and will take over the White House from January 20 -- however appear uncertain about what, if anything, should replace Obamacare.

With the party taking a political hit for appearing adrift in the opening days of the new Congress, Trump pinned responsibility back on Democrats.

"The Democrats, lead [sic] by head clown Chuck Schumer, know how bad ObamaCare is and what a mess they are in," Trump said in a string of tweets that were at once strident and conciliatory.

"Instead of working to fix it, they do the typical political thing and BLAME. The fact is ObamaCare was a lie from the beginning. 'Keep you [sic] doctor, keep your plan!' It is time for Republicans & Democrats to get together and come up with a healthcare plan that really works -- much less expensive & FAR BETTER!"

Schumer, who like Trump is from New York, retorted with a warning against attempting to gut a law that has helped millions.

"People's health is at stake. And people's lives are at stake," Schumer said in a statement, as he accused Republicans of having "no idea" how to replace Obamacare with something better.

"Instead of calling names, the president-elect should roll up his sleeves and show us a replacement plan that will cover the 20 million Americans who gained coverage, that will cover students or post-college students, 21 to 26, who want to stay on their parents' plan, that will show how we cover people with preexisting conditions."

Republicans in Congress made their first moves to repeal the law Wednesday, agreeing to begin the process of starving the system of funding.

Obama has launched a parting offensive to try to save his reform, making a rare visit to Capitol Hill on Wednesday to rally Democrats for what is shaping up as the first major fight of the next administration.

Promoted
Listen to the latest songs, only on JioSaavn.com
Democratic Senator Tim Kaine, who ran for vice president on Hillary Clinton's losing ticket last year, blasted Republicans for showing "heartlessness" about the issue.

But he held the door open for cooperation, telling CNN: "We will look at any suggestion that doesn't reduce coverage or increase cost or diminish the quality of care."