Mike Pompeo must have blushed. He was obviously not the "beauty" in the equation. 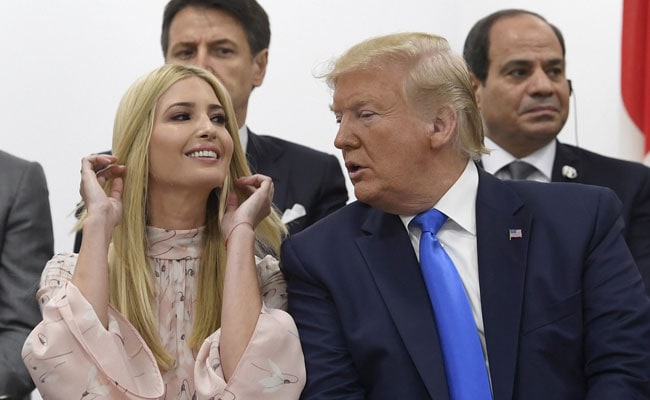 Donald Trump has commented on Ivanka's "beauty" several times in the past.

Whether he is tweeting from his bed late at night or wrapping up a historical visit to North Korea, US President Donald Trump never fails to raise a few eyebrows with his off-hand attempts at humour. Mr Trump did it again today as he invited his daughter, Ivanka Trump, and Secretary of State Mike Pompeo to the stage while visiting the Osan Air Base in Pyeongtaek, a region just south of South Korean capital Seoul, after an Asia trip.

"What a beautiful couple," he quipped before his audience of air force personnel, referring to Ivanka Trump and Mr Pompeo. "Mike, Beauty and the Beast, Mike."

The Secretary of State, a former United States Army officer and director of the Central Intelligence Agency, must have blushed. He was obviously not the "beauty" in the equation.

Earlier that day, Mr Trump had stepped onto North Korean soil in a historic move as he met Democratic People's Republic of Korea leader Kim Jong Un in a moment of high diplomatic drama.

#WATCH South Korea: US President Donald Trump called his daughter Ivanka Trump & Secretary of State Mike Pompeo on stage, referring to them as "A beautiful couple, beauty and the beast" at the Osan Air Base in Pyeongtaek, earlier today. pic.twitter.com/l0aWiNxLBL

Moments after becoming the only sitting US president to set foot inside North Korea, he brought Kim Jong Un back over the dividing line for a meeting, where they agreed to start working-level talks on Pyongyang's nuclear weapons. Mr Trump also said he has invited the young leader to the White House "anytime he wants to do it".

"It's a great day for the world and it's an honour for me to be here," Trump said. "A lot of great things are happening."

As they sat down for discussions, Kim Jong Un said their "handshake of peace" in a location that was "the symbol of the division of north and south" showed that "we are willing to put the past behind us." The impromptu meeting in the DMZ -- after Trump issued an invitation on Twitter two days ago -- came at a time when negotiations between Pyongyang and Washington had hit a deadlock.

Incidentally, this is not the first time the US President has referred to his daughter's appearance in glowing terms. "Let me tell you one thing: Ivanka is a great, great beauty. Every guy in the country wants to go out with my daughter. But she's got a boyfriend," he told the New York magazine in a 2004 interview.

Ivanka Trump and her husband, Jared Kushner, also double as the US President's advisors in the White House.