Democrats should be "focused on building up our Country, not wasting everyone's time and energy on BULLS**T, which is what they have been doing ever since I got overwhelmingly elected in 2016," Trump tweeted. 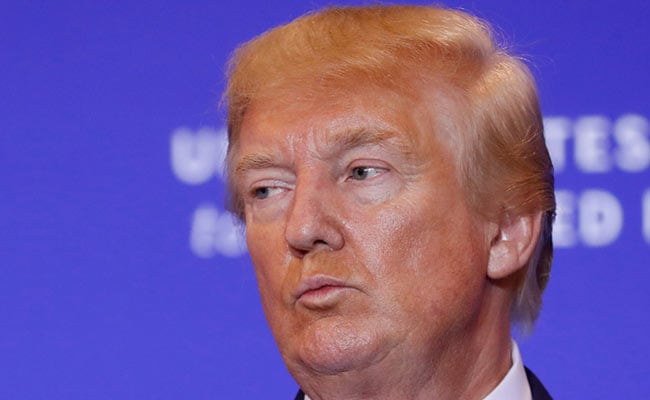 Donald Trump has fought back and claimed that this is "not an impeachment, it is a COUP."

A bellicose Donald Trump unleashed furious attacks Wednesday on the impeachment inquiry launched against him by Democrats, amid an intensifying standoff between the president and Congress.

Trump -- accused of leaning on Ukraine's president to dig up dirt on one of his main 2020 election rivals -- resorted to coarse language in his broadsides against the investigation and his adversaries conducting it.

Democrats should be "focused on building up our Country, not wasting everyone's time and energy on BULLS**T, which is what they have been doing ever since I got overwhelmingly elected in 2016," Trump tweeted.

Adam Schiff, the impeachment probe's Democratic point man in the House of Representatives, told reporters there is a "real sense of urgency" to press forward.

Trump has fought back in terms once inconceivable for a president, including his claim late Tuesday that this is "not an impeachment, it is a COUP."

He amplified the message Wednesday standing alongside Finnish President Sauli Niinisto in the White House, branding the impeachment process -- announced by House Speaker Nancy Pelosi last week -- as a "hoax."

Trump assailed Schiff, declaring the House Intelligence Committee chairman "a low life" who should be arrested for "treason."

But at the same time Trump acknowledged he may yet cooperate with the latest move by Democrats, who threatened to subpoena the White House for documents related to the president's efforts to get Ukraine to probe a political rival.

"We'll work together with 'shifty' Schiff and Pelosi and all of them and we'll see what happens," he said.

Trump insists he did nothing wrong in a July phone call with Ukrainian leader Volodymyr Zelensky and on Wednesday got support from Russia's President Vladimir Putin, who said he saw "nothing compromising" in the conversation.

Given Trump's controversial history with Putin, it was unlikely that the Kremlin leader's backing would do much to calm waters in Washington.

A White House summary of the call showed Trump pressed Zelensky several times to open a corruption investigation against leading Democratic presidential candidate Joe Biden and son Hunter, who did business in Ukraine when his father was vice president.

Neither Biden has been credibly accused of any wrongdoing.

"Biden and his son are stone-cold crooked," Trump said Wednesday.

Trump is alleged to have suggested that US military aid Ukraine sought to beef up its defenses against Russia would be contingent on him getting that favor.

A whistleblower, so far only identified as someone from the intelligence services, went to authorities with concerns about the call, triggering the impeachment inquiry.

Trump has likened the whistleblower to a spy and called for his or her identity to be made public, although by law whistleblowers are protected.

Schiff on Wednesday called Trump's comments about the whistleblower a "blatant effort to intimidate witnesses."

He also warned Trump and the White House to treat the pending subpoena with the utmost gravity.

"We're not fooling around here," Schiff said, adding that efforts to stonewall the collection of related data would be considered "evidence of obstruction of justice."

Meanwhile, the State Department's independent watchdog met with a bipartisan group of staffers from House and Senate committees to discuss new wrinkles in the scandal.

Inspector General Steve Linick showed staff, and some lawmakers who attended, documents sent mysteriously to State that included a rehash of conspiracy theories that appeared aimed at discrediting Trump's opponents.

"The briefing and documents raise troubling questions about apparent efforts inside and outside the Trump administration to target specific officials, including former vice president Joe Biden's son and then-US ambassador to Ukraine Masha Yovanovitch," the chairs of the House Foreign Affairs, Intelligence and Oversight committees said in a joint statement.

Yovanovitch "was abruptly removed as ambassador in May after a sustained campaign against her by the President's agent, Rudy Giuliani," the statement said, referring to Trump's personal lawyer.

The State Department is closely caught up in the probe, with Secretary of State Mike Pompeo confirming that he listened in during the Zelensky call.

Pompeo and Giuliani have been subpoenaed to provide documents. Five diplomats have so far been summoned to testify.

Pompeo suggested that the committees could be forced to subpoena the five officials, and that State and the White House could seek to limit what they can talk about.

"I will use all means at my disposal to prevent and expose any attempts to intimidate the dedicated professionals whom I am proud to lead," Pompeo said.

The State Department's former special envoy to Ukraine, Kurt Volker, will testify Thursday and the ex-ambassador to Kiev, Marie Yovanovitch, appears behind closed doors on October 11, according to Schiff.

Volker was sought by Giuliani to help pressure Zelensky, while Yovanovitch was removed earlier this year as ambassador after she reportedly resisted that effort.

(Except for the headline, this story has not been edited by NDTV staff and is published from a syndicated feed.)
Comments
Donald Trumptrump impeachmentDemocrats