Dolly The Cloned Sheep Was Not Old Before Her Time: Study

Dolly was put down at the age of six years and eight months due to a progressive lung disease. Dolly's breed of Finn-Dorset sheep normally live to about 10-12 years 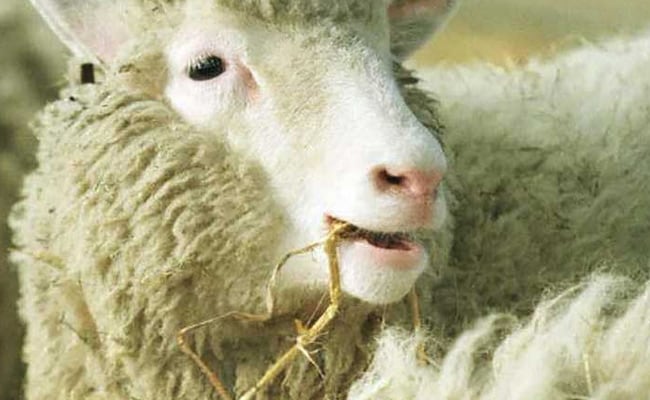 Scientists said the fear of premature, clone-related ageing appears to have been misplaced

Paris: When Dolly the sheep was put down before her seventh birthday in 2003, she was said to suffer from age-related osteoarthritis, raising red flags that clones may grow old faster.

But scientists said Thursday that the fear of premature, clone-related ageing appears to have been misplaced. Dolly's joint disease was, in fact, quite normal.

Researchers in Scotland and England based their conclusion on X-rays of Dolly's skeleton, held by National Museums Scotland (NMS), in Edinburgh.

Dolly was lame in one knee. But the extent of osteoarthritis (OA) revealed by the scans was "not unusual" for a seven-to-nine-year-old, naturally-conceived sheep.

"The original concerns that cloning had caused early-onset OA in Dolly were unfounded," the researchers concluded, adding that their research was driven by a desire "to set the record straight".

The findings were published in the journal Scientific Reports.

Dolly was put down at the age of six years and eight months due to a progressive lung disease. Dolly's breed of Finn-Dorset sheep normally live to about 10-12 years.

The researchers said their findings were backed up by X-rays of the skeletons of Bonnie, Dolly's naturally-conceived daughter, and of Megan and Morag -- sheep cloned using a different technique.

Their bones are also in the NMS collection.

The only formal record of OA in Dolly was a "brief mention" in a submission to a scientific conference, said the team. None of the original diagnostic records or scans were preserved.

The same team published a study last year in which they reported that four genetically-identical copies of Dolly had aged normally with no symptoms of osteoarthritis.

Debbie, Denise, Dianna and Daisy -- identical sisters of Dolly born 11 years later -- were made from the same mammary gland cell line that yielded the world's most famous sheep.

None of them were lame, and none had osteoarthritis uncommon for their age.

Osteoarthritis is a painful condition caused by mechanical wear and tear on joints. It can be genetic in origin, but risk factors include old age, trauma, and obesity.

At age nine, none of Dolly's four sisters were diabetic and all had normal blood pressure -- further dousing concerns of premature ageing in clones, at least in sheep.

The researchers conceded there were a few limitations to their research -- including that only the bones of the sheep were available, whereas OA is a disease of the entire joint, including the sinews and cartilage.

Also, X-ray evidence of OA does not necessarily reflect the extent of disease experienced by an animal.

It involves removing the DNA-containing nucleus from a cell other than an egg or sperm -- a skin cell, for example -- and injecting it into an unfertilised egg from which the nucleus had been removed.

Once transferred, the egg reprogrammes the mature DNA back to an embryonic state with the aid of an electric jolt.

The egg starts dividing to form the embryo of an animal almost identical to the original DNA donor.

Promoted
Listen to the latest songs, only on JioSaavn.com
Animal cloning is used in agriculture, mainly to create breeding stock, and in the business of "recreating" people's dead pets.