Trained detection canines are working with archaeologists to recover urns lost in California's most destructive wildfire. 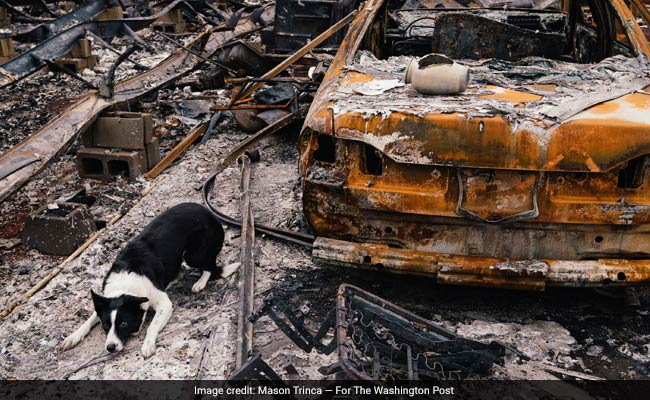 Piper, a border collie, is trained to lie down after discovering human cremains.

Larry Woodward surveyed the charred ruins of his 1,700-square foot home, the blackened brick fireplace among the few recognizable items that survived the flames.

The 73-year-old widower pointed to the mantel that once held his wife's urn. His most precious possession was now missing, lost amid the ashes created by California's deadliest and most destructive wildfire in history.

A black and white border collie named Piper followed the direction of Woodward's finger, led by her handler. Piper sniffed around the base of the fireplace. She then climbed a ladder to explore the mantel, her nose trained to find the distinct smell of human cremains.

Within minutes, Piper lay down near the fireplace, alerting a crew of archaeologists to a spot where they could distinguish the ashes of Woodward's home from the coarse, reddish-brown cremains. 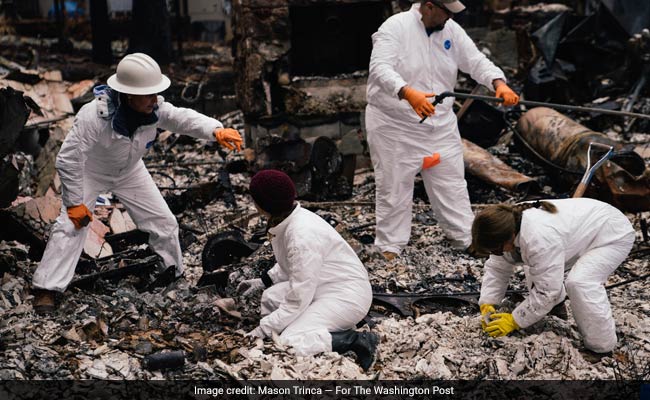 Archaeologists sift through the rubble of Tony and Lisa Englant's home in Paradise.

"Most of the search-and-rescue cadaver dogs that have been in Chico and Paradise these past few weeks are trained on the scent of decomposing human tissue, which is a much larger scent than that of old bones or cremains," said Lynne Engelbert, Piper's owner and an associate with the nonprofit Institute for Canine Forensics (ICF) based in Woodside, Calif. "Human cremains have a distinct smell that Piper and the other ICF dogs can identify."

Piper is part of an elite group of eight trained detection dogs that work with volunteer archaeologists to reunite people whose homes were lost in wildfires with the cremains of their loved ones. Unlike the dogs that searched for victims killed in the Camp Fire, which was fully extinguished on Nov. 25, Piper is skilled in detecting historical and prehistoric remains. 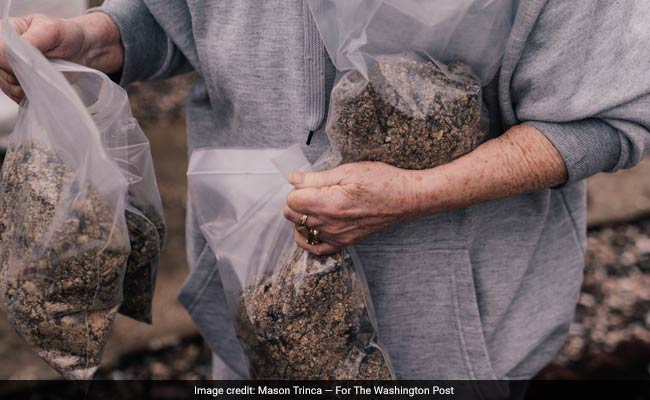 Typically herding and hunting breeds, the dogs frequently work with archaeologists to sniff out old cemeteries and burial sites on Native American tribal lands. Last year, Engelbert and Piper were one of four teams that traveled to Nikumaroro, an uninhabited island north of Fiji, to search for the remains of famed aviator Amelia Earhart, who disappeared over the Pacific Ocean in 1937.

The dogs begin their training by identifying teeth and bones before progressing to more complex burials and cremains. Once they're exposed to a range of scents, they are taught to survey an area to pick up the smell of cremains, follow the scent to the area where it is most concentrated and alert their handlers. 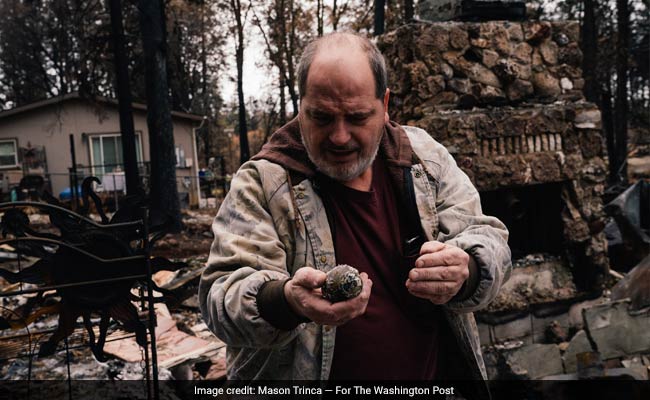 Englant examines the rubble where his home stood in Paradise.

The ICF group started last year, assisting residents affected by the Tubbs Fire in Santa Rosa, Calif. When Alex DeGeorgey, principal of Alta Archaeological Consulting, received a call from a colleague who wondered if his parents' urns could be recovered from his burned down home, he contacted ICF for help.

Because locating cremains in areas destroyed by wildfires is a new expertise, Engelbert says the teams are sometimes met with skepticism.

"There are people who believe that when the human body is cremated, all of the human scent is destroyed," she said. "We know for a fact that isn't the case. You can work a dog trained on old bones and teeth, and they will alert on cremains the first time they are exposed to them." Engelbert prays with fellow volunteers before heading out to work in Paradise, Calif.

The first recovery effort in Santa Rosa was a success, with Piper locating the site of the cremains within a matter of minutes. Once the location was identified, the archaeologists separated the wildfire ash from the cremains. They also found a metallic tag issued by the mortuary, confirming the identity of the ashes.

If the home sites are undisturbed, without people walking and sifting through the ashes after a fire, the team's success rate of locating cremains is approximately 92 percent, Engelbert said.

"Fortunately, we were able to find the cremains of 50 people in Santa Rosa," she noted. "The relief of the families was palpable. Many worried the cremains were lost forever and could potentially end up in a toxic waste site."

As of mid-December - when the team was first allowed to enter the area - 103 clients had requested the team's services in locating cremains in the Carr Fire region. Woodward's home was the first of nine sites they searched that day.

After his wife of 55 years died of cancer in May at the age of 72, Woodward placed the urn containing her ashes on the mantel of his fireplace as a temporary resting place for the mother of his two sons. 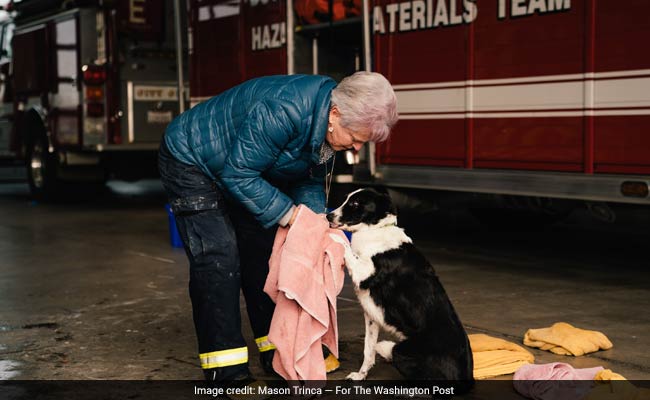 "I first met Donna when I was 16," Woodward says while choking back tears. "Over the years, we often talked about how much we loved the ocean and how we wanted to have our ashes mixed together one day and spread at sea."

As the rapidly spreading fire approached his home in November, Woodward didn't have time to retrieve his wife's urn. Less than an hour after he was forced to evacuate, his house was completely destroyed. Within sixmonths, Woodward lost the love of his life a second time.

It wasn't until several weeks later, when a relative told Woodward about ICF's work, that he began to feel hopeful. In addition to Piper and Engelbert, the crew that arrived to help him included DeGeorgey, ICF Director Adela Morris, archaeologist Anmarie Medin and Michael Newland of Environmental Science Associates, an environmental consulting firm. 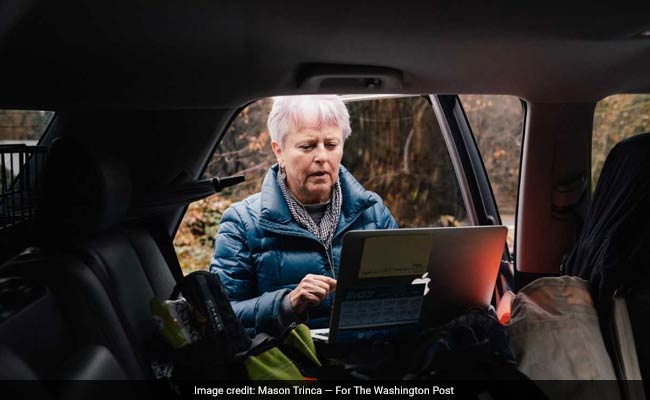 Engelbert looks up the next site to visit.

The team is all volunteer, and the service is free.

"I had friends who lost everything in the Tubbs fire," said Medin, who was retrieving human ashes from wildfire sites for the first time. "My mom also died last year, so I know the pain of losing a loved one. If I can volunteer a couple days of my time to help these families find closure, it's worth it."

Wearing white protective suits and filtration masks, the archaeologists waited for Piper to identify the area of interest, then used tools to sift through the ashes and separate remnants of the fire from the cremains and pieces of the urn. As they worked, Engelbert rewarded Piper with a toy and game of tug of war.

Once certain they had accurately identified his wife's remains, the archaeologists placed the ashes in a plastic bag and presented them to Woodward. In an emotional reunion, Woodward took the cremains and held them reverently, his eyes filled with tears.

The process took the crew about a half-hour.

"A lot of people don't believe this type of work is possible," said DeGeorgey. He said he'd like to see similar services offered as a standard federal response to not only wildfire survivors, but also families who have lost cremains in earthquakes, hurricanes or other natural disasters.

"We're not only helping families find closure," he said, "we're also building credibility in a new area of recovery."