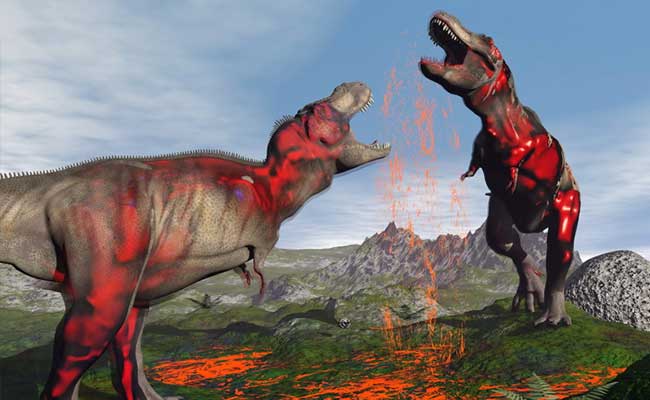 Dinosaurs were in decline long before an asteroid strike polished them off about 66 million years ago, a study says. (Representational Image)

NEW YORK: Dinosaurs were in decline long before an asteroid strike polished them off about 66 million years ago, a study says.

It's the latest contribution to a long-running debate: Did the asteroid reverse the fortune of a thriving group of animals? Or were dinosaurs already struggling, and the disruptive effects of the asteroid pushed them over the edge to extinction? Or were the dinosaurs headed for oblivion anyway?

In terms of species, "they were going extinct faster than they could replace themselves," said paleontologist Manabu Sakamoto of the University of Reading in England.

He led a team of British scientists who analyzed three large dinosaur family trees, looking for evidence of when extinctions began to outnumber the appearances of new species.

Declining groups include two-legged carnivores like T. rex and the immense, long-necked, four-legged plant eaters known as sauropods. In contrast, another familiar dinosaur, triceratops, belonged to a group that was on the rise.

The results appear in a paper released Monday by the Proceedings of the National Academy of Sciences. Sakamoto said it's not clear what caused the long-term declines.

The results support the idea that the asteroid strike pushed a struggling group into extinction, rather than the idea that dinosaurs were doomed anyway, he said. He also noted that one group in decline still lives on in its descendants, today's birds.

The killer asteroid is thought to have struck the coast of Mexico's Yucatan Peninsula, creating widespread wildfires and lingering smoke that blocked sunlight, and changing climate.

Mark Norell, chair of the paleontology division at the American Museum of Natural History in New York, called Sakamoto's analysis "the best you can do" given the lack of available fossils from that time.

Most data came from North America with some from Asia and western Europe he said, and the conclusion would be firmer if fossils could be included from a wider geographical distribution.

David Fastovsky, chair of the geosciences department at the University of Rhode Island in Kingston, said placing the seeds of the decline so early in time is striking and unexpected. Paleontologists will no doubt examine the study "quite closely," he said.