Palaeontologists unearthed parts of the spine and ribs of the dinosaur which suggest that the huge reptile was about 12m tall and 25m long. 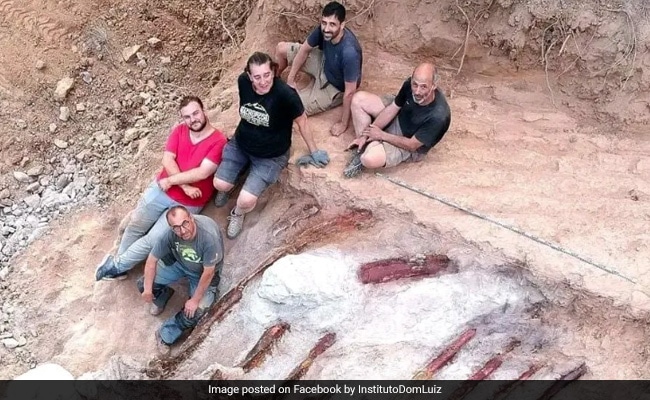 The remains are believed to belong to a sauropod dinosaur.

The remains of what could be the largest dinosaur ever found in Europe have been uncovered in man's back garden in Portugal.

According to BBC, the skeleton was discovered in the central city of Pombal in 2017, when a man began building work on his house and noticed fragments of fossilised bone. Spanish and Portuguese palaeontologists then excavated the dinosaur in August this year. They believe that the fossilised skeleton is of a sauropod, which were herbivorous, four-legged creatures who had long necks and tails.

Sauropods were the biggest of all dinosaurs and the largest land animals ever to have lived. Experts informed that they lived during the Upper Jurassic period which was around 150 million years ago.

Palaeontologists unearthed parts of the spine and ribs of the dinosaur which suggest that the huge reptile was about 12 meters (39 feet) tall and 25 meters (82 feet) long.

Elisabete Malafaia, post-doctoral researcher at the Faculty of Sciences of the University of Lisbon, told Phys.org, "It is not usual to find all the ribs of an animal like this, let alone in this position, maintaining their original anatomical position."

"This mode of preservation is relatively uncommon in the fossil record of dinosaurs, in particular sauropods, from the Portuguese Upper Jurassic," she added.

Because of the natural position that the skeleton was found in, researchers working on the dig are hopeful that there is more of it they are yet to unearth.

The skeleton is now being studied by an international research team.

Meanwhile, this comes after researchers in the United States found dinosaur footprints from 113 million years ago. After a drought in Texas dried up a river flowing through Dinosaur Valley State Park, tracks from the giant reptiles were exposed.